Who is Corridor Digital?

"Corridor Digital is an internet based content creation studio. We make professional looking cinematic videos and put them on youtube for people to enjoy. Our two YouTube channels have over 600 million views and 4.8 million subscribers. We pride ourselves in using emerging technologies, out-of-the-box filmmaking strategies, and lots and lots of visual effects to make the kind of content no one has generally seen before, in a package that is both entertaining and engaging.

My name is Wren! My specialty is in making VFX for our videos, but as a “youtuber” I usually wear many different hats at the same time. Apart from being an onscreen video host on many of our more reality show format videos, I also often direct our short films as well. Or handle the camera. Or edit. Or write. Or hold the microphone. Or anything that may require attention. Most of the time, however, I’m cranking away on my computer building visual effects like a Nerf Gun Turret transformer or simulating a smoke deity summoned by hipster vapers. I do this because I love it. I’m entirely self taught with no formal education in filmmaking or visual effects. The learning resources are available to everyone thanks to the internet!"

"I do this because I love it. I'm entirely self taught with no formal education in filmmaking or visual effects."

What hardware and software do you use?

"The program I use most often is Adobe After Effects, followed by either Adobe Premiere Pro or 3ds Max. Almost everything I produce will at one point go through After Effects since it’s the most versatile tool of my trade. For rendering and simulating things that don’t exist, I use 3ds Max as my 3D program, along with Octane Render as my renderer.

The hardware we generally use, other than a computer, is usually some sort of camera. Whether that’s our cinematic Red Epic camera, or GoPros or even a large variety of drones, we have many different options for capturing footage. We use various stabilizing gimbals, and even portable electric vehicles to help make projects.

A typical post-production workflow for a video will usually start with editing the film together, and trying to get that as locked as possible before selecting the clips that will need effects, and creating project files for them. Dynamic Link between Premiere and AE makes this really convenient and easy. From there it’s just a matter of finishing whatever VFX are needed and exporting a finished video with everything that’s needed."

"I’ve built multiple computers in the past. I know how they should work and how they are built. The problem there is that it takes a lot of time to go through this whole process, from researching which parts to acquire to building the workstation itself. So at our studio, we’ve opted to have workstations built for us by a company to save time. This is all fine and dandy until they stop working. The customer support tended to be lacking. Most egregious is that when we actually took the computers apart in search of a problem, we discovered several parts were actually refurbished! Things like hard drives, SSDs, and the motherboard! This isn’t so bad, but of the 4 computers we got through this other company, 3 ended up having serious problems.

Apart from these physical problems though, they tended to work just fine. Though, they were merely good gaming PC’s at the end of the day. I found myself sometimes wishing I had more RAM but usually just wishing I had a better graphics card. The 3D rendering engine I use, Octane, works by utilizing the CUDA cores found in NVIDIA graphics cards. It’s great because it scales pretty linearly so you can see a pretty direct correlation between graphics card power and rendering speed. The gaming PC I was using didn’t have the best card out there so I was usually aware of how much faster those renders could have been with a better setup."

"I’ve built multiple computers in the past. I know how they should work and how they are built. The problem there is that it takes a lot of time to go through this whole process, from researching which parts to acquire to building the workstation itself."

"This computer is a monster. Not only did it come with a custom engraved case featuring our studio logo and name, it is the most powerful computer I’ve ever used. Everything is faster. Video editing in premiere is seamless at full 6K resolution and loading and rendering times from After Effects are essentially negligible now. 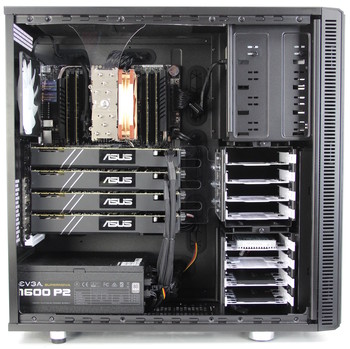 The real treat however, came from the significant improvements in Octane Rendering times. Before, I had been using the NVIDIA GTX 980, which is slower than the NVIDIA 1080, of which I now have four. We did a video called Smallest Empire, which had CGI buildings, trees, fences, and rocks, etc. Because they were very long takes, these renders lasted thousands of frames and therefore took a very long time to render on that card. When I set up the same scene with the new machine, what was originally a 23 hour render was now a 4 hour render. Before, I had to wait till the weekend to que up two renders to go all weekend. With the new machine I could’ve just rendered them overnight and had them done by the time I came into the studio the next day. Even more render intense is to put colored lights into simulated smoke. The smoke glowing with various colors as the light passes through it is incredibly render intensive. So much so that I never entertained the thought of even trying it before. It still took about 12 hours to render on the new machine but now I had a sweet render I wouldn’t have ever tried before.

With this new setup, renders that would normally take 1-2 hours took less than 15 minutes. This meant that I didn’t really need to account for and work around render times anymore. I could just set a render to go, do some passive work for a few minutes, then continue compositing once it was done. I feel super efficient now."

Why would you recommend Puget Systems?

"Right out of the gate, working with Puget systems was great because they actually interviewed me first about what I needed and wanted in a workstation. The main thing I was interested in was more graphical power like a multiple GPU system. They also asked about my interest in a huge SSD or internal storage system. As a video editing studio, this was a natural question to ask but I actually didn’t really need internal storage since we work from a networked server. As long as whatever storage I had was fast, I’d be happy. They understood what I needed and devised a system to meet those criteria.

So some time goes by and then we receive a fully operational mega-PC-workstation. I only needed to install the software I use and I was ready to go. This was an amazingly smooth process since everything had already been tested. I even received this cool printed report showing all the benchmark results. This thing was a beast with FOUR super high performance graphics cards. They even installed Octane in the process of testing it to make sure that the setup would even work, saving me the time of troubleshooting it. They knew that’s what I was going to use the workstation for so they specifically tested it for me and any future Octane using clients. I thought that was a particularly nice touch."

"Puget Systems was able to build me a machine specifically tailored to my working needs. They made the process easy and streamlined so that I could remain focused on the creating side instead of stressing about the tools I needed to do the job. And to top it off I now have a machine that I’m confident will work."

Are your needs similar to those of Wren at Corridor Digital? If so, we can build a system for you.