At Puget Systems, one of our primary goals is to make sure that our customers end up with a fast, reliable workstation that is perfectly tailored to their unique workflow. The main way we do this is by benchmarking a wide range of hardware in DaVinci Resolve (and numerous other software packages) that we then publish in our ongoing series of hardware articles.

However, while this ensures that we are selling the right hardware, it does not give our customers a great idea of how much faster a new workstation might be compared to their existing system. In addition, with the amount of hardware that is currently available, it is impossible for us to test everything on our own, so we want to provide tools for other hardware reviewers to perform real world benchmarking in professional applications like DaVinci Resolve

To address both of these issues, we are making our DaVinci Resolve benchmark available for download so that anyone can can perform the same testing we do in our hardware articles. 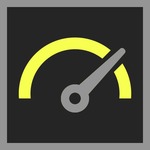 Suitable for personal use
Results upload to the PugetBench online database. 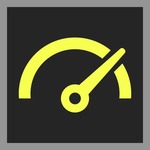 Press licenses can be made available for reviewers in the USA that consistently publish reviews for online and/or print publications. Note: an additional licensing agreement is required for press licenses.

The main benchmark download includes all the files necessary to run the Standard preset. If you wish to run the Extended preset, you will need to download the supplementary Extended Assets from the link below and place it alongside the "Standard" assets in the "Assets" folder. Note that the Extended preset requires the Studio version of DaVinci Resolve and a GPU with at least 8GB of VRAM: 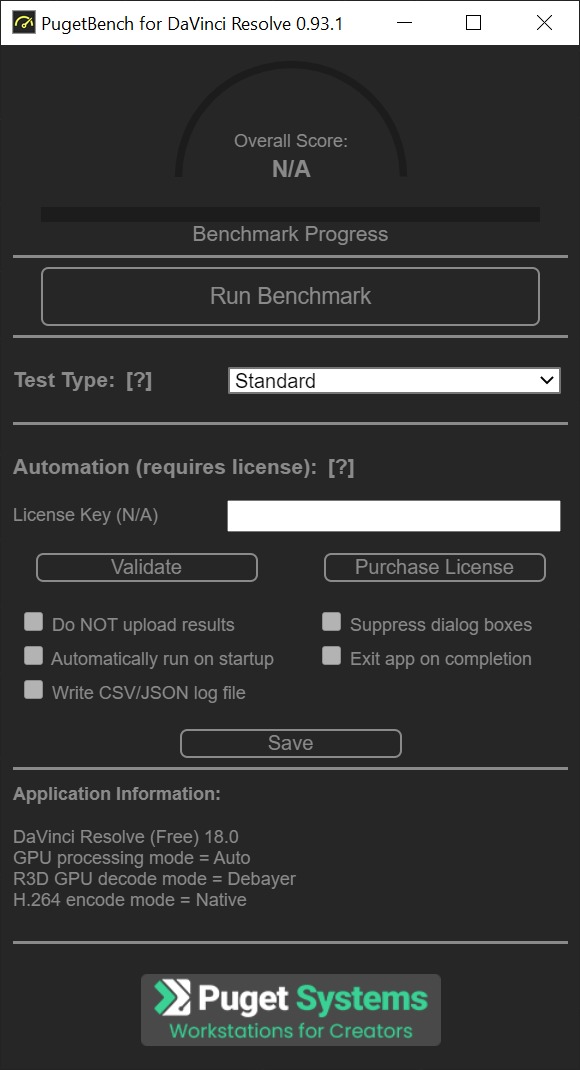 This benchmark is currently for Windows ONLY. We have plans for a MacOS and Linux version in the future, but there is no ETA for when it will be available.

Note that this benchmark is still in BETA. Plug-ins and customized preferences in particular may prevent the benchmark from running properly. If you run into any issues, we recommend resetting your preferences to default.

A Note on DaVinci Resolve Free vs Studio

Blackmagic has two versions available for DaVinci Resolve – a Free version and a paid “Studio” version. In the context of benchmarking, the primary differences between these two versions is the following:

While the “Standard” and “R3D Mode” presets can be run on either version, the lack of GPU decoding/encoding means that you will always see lower performance with the Free version of DaVinci Resolve. In addition, if you want to test multiple GPUs or run the Extended preset, you will need the Studio version.

When the benchmark is complete, it will give you an "Overall Score" and upload the results to to our online database (unless told not to with the licensed version). From the uploaded results, you can view the sub-scores and individual test results.

If you have any issues with the benchmark not properly running, first verify that your system meets the System Requirements and that the version of DaVinci Resolve you are using is supported. If there are no issues with your system or software, there are a number of troubleshooting steps you can try:

Our DaVinci Resolve benchmark looks at rendering with a wide range of codecs at 4K and 8K (Extended preset only) resolutions, OpenFX, as well as performance in Fusion.

For the 4K and 8K media tests, we benchmark with a relatively basic grade in order to focus on the processing performance for those codecs. Exporting is done both to H.264 (a very standard delivery codec), as well as to DNxHR HQ in order to minimize the encoding step of the process.

The GPU Effects portion of the test focuses on OpenFX and noise reduction with the following effects:

Lastly, the Fusion tests look at the performance in the Fusion tab for a range of projects. These focus on:

The scoring system used in our benchmark is based on the performance relative to a reference workstation with an Intel Core i9 10900K and NVIDIA Titan RTX 24GB.

The results are all combined into the "Standard", and "Extended" Overall scores depending on the benchmark preset you chose.