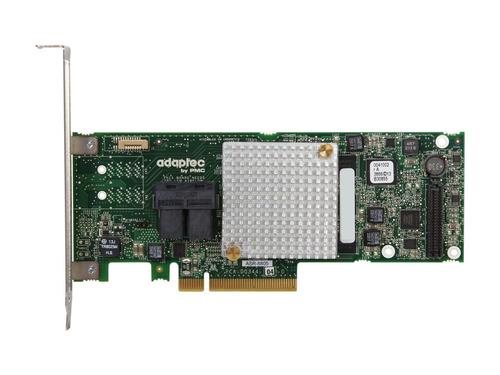 The Adaptec 2277500-R 8805 RAID Adapter is an 8-port, 12Gbps SAS / SATA controller card. It supports all major RAID modes via a hardware controller chip plus 1GB of onboard memory, and by utilizing a PCI-Express 3.0 x8 slot it can handle tremendous data bandwidth. This allows using even fast solid-state drives effectively, though the strengths of RAID are generally capacity and redundancy rather than speed.

For mission-critical work, there is also an optional hardware add-on to protect data in the card's cache during an unexpected loss of power. This upgrade, called a Flash Module Kit, helps to shield data that was in the process of being written during power loss from corruption. Without that, it is highly recommended to disable the Write Caching feature on this card. Doing so reduces write speeds on hard drive based arrays dramatically, but the alternative is to leave your data open to corruption in the case of an unexpected loss of power. Solid state drives do not need write caching with this card, however, and actually perform better with it disabled.