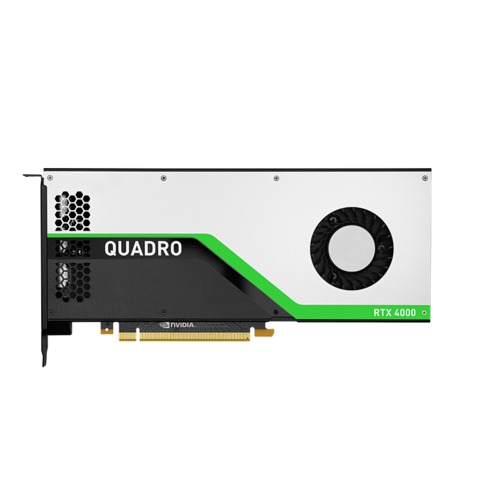 The NVIDIA Quadro RTX 4000 is a professional Turing-based graphics card, offering good overall performance along with specialized ray tracing and machine learning inference hardware (RT cores and Tensor cores, respectively). While not sporting as much onboard memory as higher-end Quadro models, the RTX 4000's 8GB of VRAM is on par with similarly priced GeForce models. A rarity among modern video cards, the RTX 4000 uses a single-width cooler - allowing it to take up less space in systems which have a lot of other expansion cards or fit easily into smaller form factor computers.

To compliment its focus on professional 3D applications, the Quadro RTX 4000 supports up to four monitors at the same time. Three can be connected via DisplayPort outputs, and the fourth through VirtualLink. That is a newer connector - a specialized Type C port combining DisplayPort, USB 3.1, and power. It was conceived as a single-cable connectivity to next-generation VR headsets, but can also be used (with the included DisplayPort adapter) to connect a normal monitor.