Maxim Jago is one of those rare talents who has so many interests and passions that it's difficult to adequately describe him. He might be best known as the author of the official book on Adobe Premiere Pro, but he's also a consultant Futurist, filmmaker, and creator of educational materials.

Jago has produced over 2000 tutorials explaining post-production techniques, directed over 30 short films, and is a regular speaker as events such as Cannes, TIFF, Sundance, Berlinale, and Raindance. He's currently planning two bigger picture film projects. The first is Jolie's Garden: A psychological thriller that will be produced in 2D and separately in true VR as an immersive experience. This film explores the impact of perception on permission.  The second is Orpheus Rising, which will have a game sequel released the same day as the film. Audiences will be able to watch the film at the theater, then go home and cross the fourth wall, becoming the lead character and exploring many of the locations in which the story of the film unfolded.

As a Futurist, Jago works with Curve Reality, where they are developing a powerful, portable, tiny console geared towards VR. He's also the CIO at Flimdoo.com, an online film viewing and education platform.

We’re seeing an unprecedented amount of change in our daily lives but haven’t changed much as a species for perhaps 200,000 years. As adaptable as we are, there are ways our technology can serve our nature and help us fulfill our potential, and there are ways it can become an obstacle. I’m interested in supporting the manifestation of people’s potential. 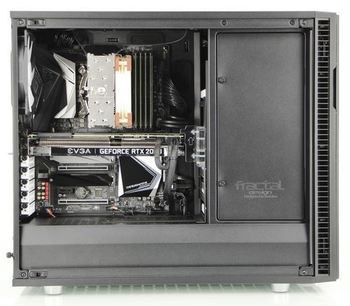 When asked what tools were part of his workflow, Jago replied, "Everything." As for his standard toolkit, he relies on Photoshop, Illustrator, and Acrobat. He's edited a lot of content in Avid Media Composer but finds himself using Adobe Premiere Pro today. He also uses After Effects for visual effects, Audition, or Pro Tools for audio mixing. Occasionally, he will use a third party visual effects package like those provided by BorisFX, Red Giant, and so on.

Jago also uses Microsoft Office, Google Docs and Evernote to organize his thoughts, projects, and presentations. He's also a fan of gaming mice because he can map the extra buttons to keyboard shortcuts – useful when working on an edit. He considers a large, high quality, high-resolution monitor to be one of the most important investments one can make.

I care a lot about the power of my system. The speed and number of cores of the CPU, and the amount of system memory – these things matter a lot. But also, now more than ever, the speed of the storage and power of the GPU are both critical. We’re pushing systems really hard when working with high-resolution RAW video media.

When asked about the technical challenges, Jago spoke to the three he faces most often:

Power: When working with large files, he needs his editing systems to be fast, robust, and support lots of storage. It's a challenge to keep the editing systems with his demanding workflow.

Information: So much information stemming from multiple sources is challenging. At any one time, he's working with five clients in multiple time zones, to produce educational projects. Project management across all his endeavors is critical.

Changing Times: The technology, culture, and aspirations are changing so fast today that it can be difficult to get the guidance and understanding one needs to be effective. For example, take producing a VR film: There are several systems available that provide excellent results when producing truly three-dimensional (not just stereoscopic) content. Each time his team researches these options, new systems have been developed, each bringing benefits, risks, and new workflows to master.

Jago came to Puget Systems after building his own computers when he worked for a system integrator in the U.K. He's also worked on computers from HP, Dell, Apple, and Microsoft. As a professional who relies on various technologies, he has come to value robustness and reliability in any system he utilizes.

Puget Systems worked with Jago to understand his workflow so that they could pinpoint any bottlenecks. In the end, Puget Systems custom-built a workstation with eight-core Intel Core i9 9900k CPU, NVIDIA GeForce RTX 2080 Super XC GPU, 128GB of RAM, enough M.2/SATA3 SSD storage to handle multiple projects at a time. Adobe Premiere is the most hardware demanding application he uses, so Puget Systems selected components that would give Jago a workstation that's optimized to handle Premier's needs, and should last him for many years to come.

I had heard great things about Puget Systems and they haven’t disappointed. The system is powerful and beautifully configured.