At Puget Systems, one of our primary goals is to provide fast and reliable workstations that are perfectly tailored to each customer's unique workflow. As a part of this, we publish an ongoing series of hardware articles for Photoshop – as well as numerous other software packages – in order to discover what hardware configurations are optimal for these specific applications.

However, while this ensures that we are selling the right hardware, it does not give our customers a great idea of how much faster a new workstation might be compared to their existing system. In addition, with the amount of hardware that is currently available, it is impossible for us to test everything on our own, so we want to provide tools for other hardware reviewers to perform real world benchmarking in professional applications like Photoshop.

To address both of these issues, we are making our Photoshop benchmark available for download so that anyone can can perform the same testing we do in our hardware articles. Even better, this benchmark is compatible with both Windows and Mac-based systems which allows for cross-platform performance comparisons.

Want to see how your system compares? PugetBench for Photoshop now uploads results to our Online Database!

For commercial use – includes optional uploading of results, email support, automation, and logging. 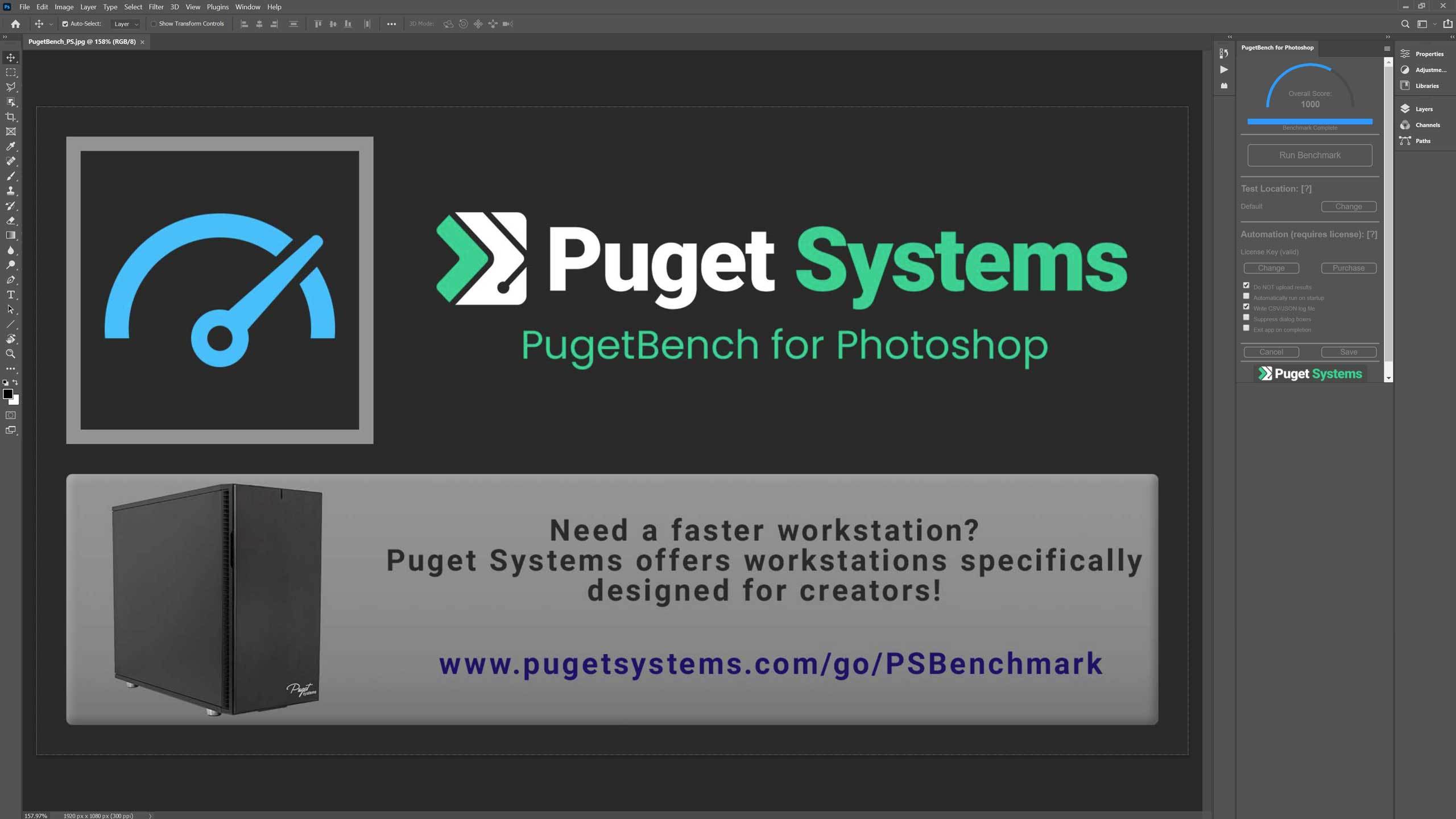 Note that this benchmark is still in BETA. Plug-ins and customized preferences in particular may prevent the benchmark from running properly. If you run into any issues, we recommend resetting your preferences either by following Adobe's guide or by using our Adobe CC Preference Backup/Restore/Clear utility (Windows only).

Each individual task is run a total of three times with the fastest result being used to tally the final score. A full run should take approximately 15-30 minutes but will vary based on the performance of your system. When the benchmark is complete, it will give you an "Overall Score" and upload the results to to our online database (unless told not to with the commercial version). From the uploaded results, you can view the sub-scores and individual test results.

If you have any issues with the benchmark not properly running, first verify that your system meets the System Requirements and that the version of Photoshop you are using is supports. If there are no issues with your system or software, there are a number of troubleshooting steps you can try:

Each individual task is run a total of three times with the fastest result being used to tally the final score. A full run should take approximately 15-30 minutes but will vary based on the performance of your system. When the benchmark is complete, it will give you an "Overall Score" as well as individual scores for the different types of tests. The Overall Score will be reported directly by the benchmark, or you can view the full results in our benchmark result browser.

It would be nearly impossible to test everything in Photoshop, but our benchmark is designed to test a broad range of tasks in order to give an accurate overall picture of how a system performs in Photoshop.

The time to complete each individual task is compared to the reference result with the average for each being used as the score for that test. The Overall Score is based on a 50/50 split between the General and Filter tasks.

There is also a dedicated GPU Score that is the average of the results for the Rotate, Smart Sharpen, Field Blur, Tilt-Shift Blur, and Iris Blur which are the five tasks that make the most use of the video card.