At Puget Systems, one of our primary goals is to provide fast and reliable workstations that are perfectly tailored to each customer’s unique workflow. As a part of this, we publish an ongoing series of hardware articles for Premiere Pro – as well as numerous other software packages – in order to discover what hardware configurations are optimal for these specific applications.

However, while this ensures that we are selling the right hardware, it does not give our customers a great idea of how much faster a new workstation might be compared to their existing system. In addition, with the amount of hardware that is currently available, it is impossible for us to test everything on our own, so we want to provide tools for other hardware reviewers to perform real world benchmarking in professional applications like Premiere Pro.

To address both of these issues, we are making our Premiere Pro benchmark available for download so that anyone can can perform the same testing we do in our hardware articles. Even better, this benchmark is compatible with both Windows and Mac-based systems which allows for cross-platform performance comparisons.

Want to see how your system compares? PugetBench for Premiere Pro now uploads results to our Online Database!

Step 1: Get the Plugin

Includes assets for Standard and
Extended test presets
Be sure to check out the full list of benchmarks we have available! 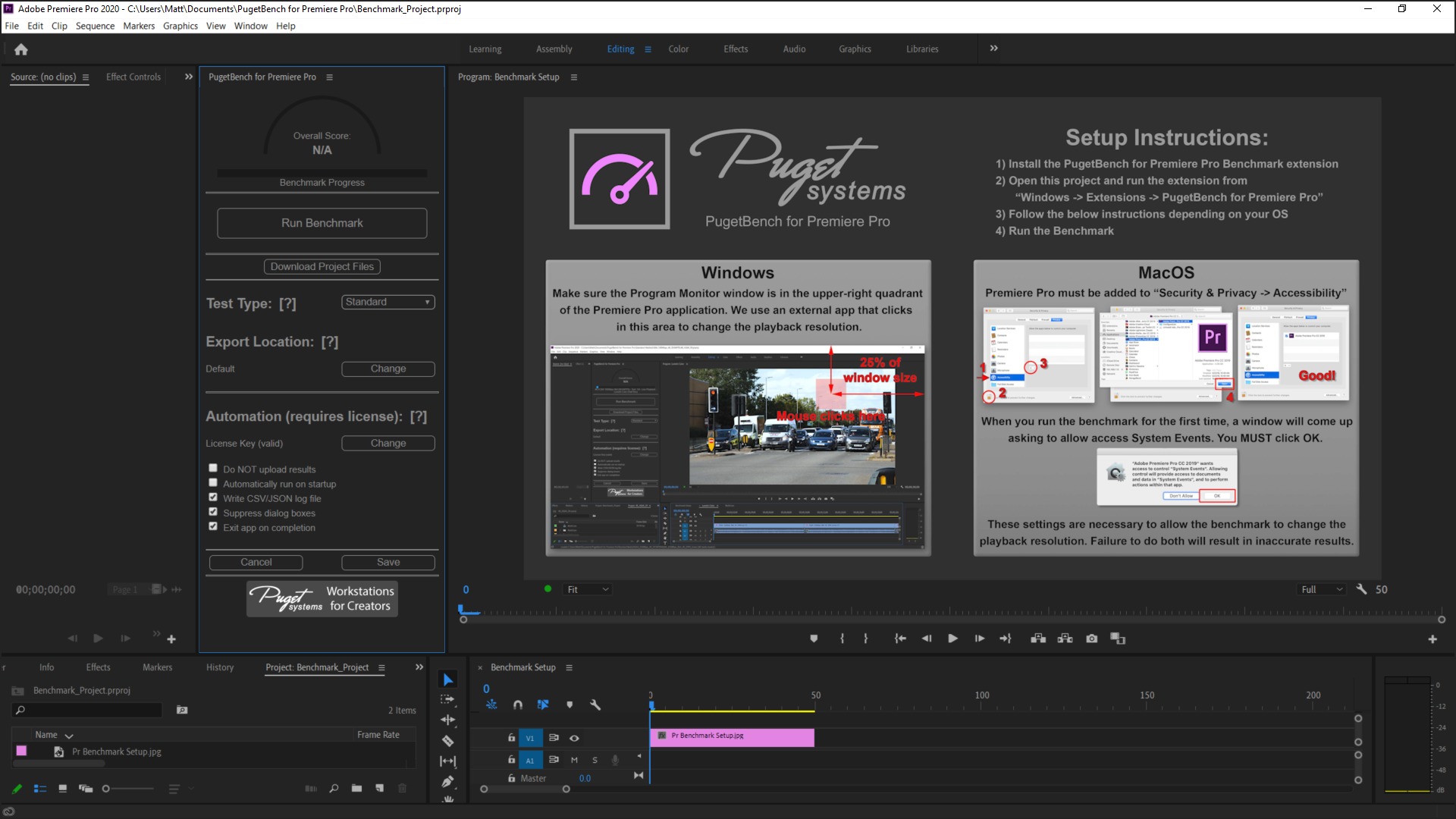 Note that this benchmark is still in BETA. Plug-ins and customized preferences in particular may prevent the benchmark from running properly. If you run into any issues, we recommend resetting your preferences either by following Adobe’s guide or by using our Adobe CC Preference Backup/Restore/Clear utility (Windows only).

While a there are no configuration options in Premiere Pro that need to be set, there are a few things you need to do before running the benchmark depending on your OS.

When the benchmark is complete, it will give you an “Overall Score” and upload the results to to our online database (unless told not to with the commercial version). From the uploaded results, you can view the sub-scores and individual test results.

If you have any issues with the benchmark not properly running, first verify that your system meets the System Requirements and that the version of Premiere Pro you are using is supported. If there are no issues with your system or software, there are a number of troubleshooting steps you can try:

Our Premiere Pro benchmark looks at both live playback and export performance with a wide range of codecs at 4K and 8K resolutions. In addition, there are dedicated “Heavy GPU Effects” and “Heavy CPU Effects” sequences that are designed to individually stress the GPU and CPU beyond what a typical Premiere Pro user will do.

For each type of test media, we look at four test sequences:

In addition, we have a “Heavy GPU Effects” sequence using:

The Live Playback and Export scores are all combined into the “Standard”, and “Extended” Overall scores depending on the benchmark preset you chose. Here, we multiply the scores by 10 in order to make sure the Overall scores are larger than the sub-scores (since bigger number = more important). Due to this, a score of “1000” would match the reference system, while a score of “800” would indicate performance roughly equal to 80% of the reference system.

The GPU Score is the average of the results for the GPU Effects tests as well as the H.264 export tests.

Looking for an Premiere Pro Workstation?