Skip to content
Always look at the date when you read an article. Some of the content in this article is most likely out of date, as it was written on February 7, 2014. For newer information, see our more recent articles.

Windows XP has had its end of support deadline pushed back many times due to the sheer number of systems that still use Windows XP, but the latest (and likely final) deadline is coming up. While even this latest deadline may be extended, it doesn't change the fact that very soon Windows XP will no longer be a supported operating system. The real question is: what does "end of support" actually mean for all the computers out there that are still running Windows XP?

Q: When is Windows XP end of support?

A: Currently, the end of support deadline for Windows XP is set for April 8, 2014.

Q: What does end of support actually mean?

A: To put it as concisely as possible, end of support means that Microsoft will no longer create or distribute software updates for Windows XP. Specifically, any newly discovered OS vulnerabilities that may compromise the security of your system will not be addressed or patched by Microsoft. In addition to no longer publishing updates for Windows XP, Microsoft is also beginning to pull back support for Microsoft Security Essentials. While updates for MSE will continue to be released until July 2015, Microsoft will stop providing MSE for download on Windows XP systems on April 8, 2014. However, this would not stop anyone from downloading MSE from third party download sites, so realistically this does not actually mean very much.

Q: What will happen to my Windows XP computer?

A: In the short term, end of support will have little to no effect on either the functionality or security of a system running Windows XP. However, any vulnerability that has not yet been discovered will no longer be fixed by Microsoft. The biggest risk to a computer running Windows XP after April 8, 2014 is if one or more cyber criminals have resisted using a security vulnerability they discovered months or even years ago in order to wait for Microsoft to discontinue support for Windows XP. By doing so, they would be ensured that whatever vulnerability they use to compromise a Windows XP system will not be patched by Microsoft. While it is very unlikely, it is within the realm of possibility that any Windows XP computer connected to the internet on April 8, 2014 will be almost immediately compromised.

Q: Do I have to upgrade my OS or do I have a choice?

A: If your computer is simply your home personal computer, there is likely not anything forcing you to update. It is of course recommended in order to keep your computer and data secure, but for general usage there is no law saying you have to. However, if you are in a business environment or otherwise have to adhere to industry or federal standards, you may be required by law to update to a newer OS. For example; HIPAA, PCI-DSS, and Sarbanes-Oxley all have provisions that in one way or another will make Windows XP non-compliant after April 8, 2014.

Q: Should I upgrade to a newer OS?

A: The short answer is "yes", if you can upgrade you certainly should. Whether to Windows 7, Windows 8.1, or even Linux, we highly recommend upgrading if at all possible. There are times when this is not an option – if you have specialty software that requires Windows XP, for example – but otherwise you really should upgrade. Yes, it is painful to backup all your data, install a newer OS (or go through an upgrade path), get all your programs reinstalled and otherwise re-setup the computer, but in the end it is still a very good idea. It requires an investment now, but the risk of your computer becoming un-useable if you keep using Windows XP in most cases is not worth it.

As for which OS to upgrade to, the choice is going to be different for everyone. If you have a very old system, you might actually not be able to upgrade to Windows 7 or Windows 8.1 simply due to the fact that there may not be drivers available for your hardware. If this is the case, a variant of Linux (we generally recommend Ubuntu in these cases) might actually be the best option. It certainly is different than Windows, but not by as much as most people think.

Choosing between Windows 7 and Windows 8.1 is largely going to come down to your own personal preference. If you want the OS to look as similar to Windows XP as possible, Windows 7 is likely the better choice. However, if you are willing to get used to the Windows 8 interface, the OS as a whole is actually faster and more stable than Windows 7 (although many people would argue this fact).

Q: Should I buy a new PC rather than just upgrade my OS?

A: This is a very tricky question for us to answer since we are a custom PC manufacturer. However, we always try to be as honest as possible so hopefully the answer to this question is not taken as a way for us to try to drive business. The question of if you should take this opportunity to get a new PC is going to rely on if you can afford a new computer, whether you want a new computer, how you use your computer and how old the computer is. This is going to vary person by person, but here are two scenarios that might apply to you:

Scenario 1: You use your PC exclusively for email, surfing the web and movie streaming. In this case, you likely don't have any need for faster hardware but you should still upgrade the OS if possible. In fact, if you are this type of computer user you might actually look at some of the new tablets that are available – especially the ones that come with a keyboard dock. Most of them run an Android-based OS, but for email and web browsing that OS is likely more than adequate.

Scenario 2: You use your computer for business tasks and it is essential to your productivity. If your computer really is essential, this might be the opportune time to purchase a new PC. Of course, if your system is fairly new it likely isn't worth it, but considering that Windows XP is 13 years old it is unlikely that your computer is anywhere close to new.

Q: How do I keep my Windows XP computer safe?

A: If you cannot upgrade for one reason or another, there are a few things you can do in order to minimize how vulnerable your Windows XP computer is. While the most effective course of action is still to upgrade, simply minimizing – or entirely eliminating – the amount of time the computer is spent connected to the internet would also greatly improve the safety of your system. In fact, if you were to completely disconnect the computer from the internet, end of support would have very little impact that computer.

If upgrading the OS or disconnecting the computer from the internet is not possible, then the next best thing to do would be to limit the number of possible vulnerabilities by installing a good anti-virus software (and keeping it regularly updated) and having your computer behind a router and firewall. However, even if you do keep your anti-virus software updated, don't expect it to completely protect your Windows XP system. If a new exploit is discovered that takes effect at the system level, anti-virus software simply would not be able to detect it before your system is compromised. If you need internet access, and want to ensure your system is safe, the only sure way to do so is to upgrade your OS to a newer version.

Q: I have an application that only runs in Windows XP. Now what?

A: If this is the case, the first thing we would recommend doing is to check with the publisher of the application to see if there is a newer version available that supports a more modern OS. If there is not, or if the cost is prohibitively expensive, there are only a limited number of options. The best option would be to simply disconnect the computer from the internet as much as possible and use it as an offline-only machine.

If the system requires consistent internet access, the next best thing would be to upgrade the OS, but use a virtual machine or Windows XP Mode to run a copy of Windows XP from within your newer OS. While this helps to isolate the dangers somewhat, the downside to this is that since any virtual machine or Windows XP Mode is essentially a full Windows XP OS, it will be subject to the same end of support problems as a standard Windows XP installation. Specifically, it will be just as vulnerable to security threats whenever it is up and running. 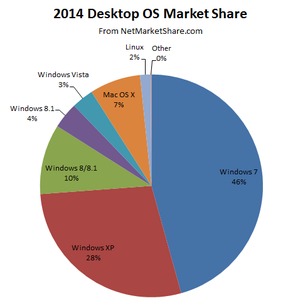 According to netmarketshare.com, about 29% of desktop computers that have access to the internet are still running Windows XP. If we assume that there are roughly 300 million computers in use (this number might not be accurate, but should be close), that is 87 million computers in the US alone that will be affected by the end of Windows XP support. This translates to a huge number of affected users, which is why we wanted to answer as many questions as possible about the end of support.

However, we know there are still more questions you may have, so feel free to ask in the comments below. We will at least try to answer your question, and we may even add it to this article.