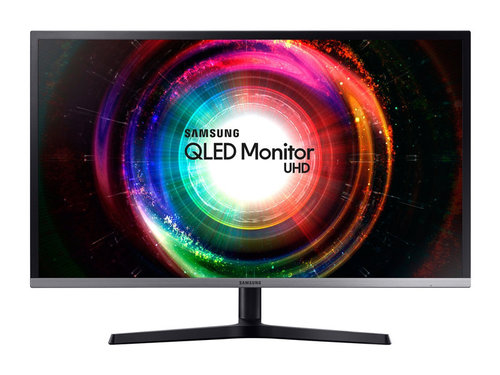 The Samsung UH750 is a high-end, 4K, QLED monitor featuring a massive 31.5-inch screen with 3840x2160 resolution. QLED stands for 'quantum dot light emitting diode', which is a technology used in the backlighting of the monitor. It allows for control of brightness on a per-pixel level, and a more traditional TN panel is used over the top of that to enable a wide color gamut with low latency. The use of a TN panel also means the viewing angles are not fantastic, but if used as a desktop monitor then the screen should be centered in front of the user most of the time anyway (making viewing angles less of an issue).

The UH750 is mounted on a stand that provides tilt, swivel, and height adjustments - but which can be removed to reveal a 100x100 VESA mount, if needed. A USB 3.0 hub is built-in for easy connectivity of high-speed peripherals, but there are no built-in speakers.

Because 4K resolution is four times that of 1080P, it requires a high bandwidth video connection in order to run at its full capabilities. The only ways to do that over a single cable and reach full resolution at 60Hz refresh rate are with DisplayPort or HDMI 2.0, both of which are supported as inputs. Both cable types are included as well: a standard HDMI cable and a Mini DisplayPort to DisplayPort cable. That is handy since different video cards have different sizes of the DisplayPort output, and this monitor has both - so you can go from any DisplayPort capable video card to the monitor with that one cable, regardless of connector size.

Jeff Stubbers (Technology Consultant Lead) Says:
The 3840x2160 screen resolution of this monitor has 4x the pixels of a Full HD 1920x1080 resolution monitor, which provides a lot of work-space, allowing several programs windows to run side by side without overlapping. This monitor has a pixel pitch of 0.181mm. I have no hesitation recommending this monitor, it is impressive!

This monitor does not come with built-in speakers, so if you would like speakers, please be sure to get those separately.

Here is an article of monitor specs to be aware of that provides information that may be helpful in your monitor search.
Model: Samsung LU32H750UMNXZA