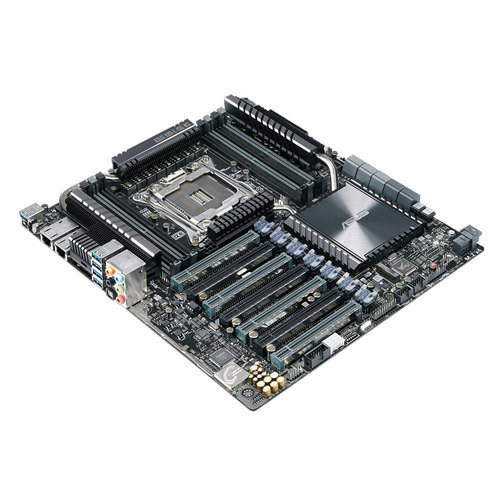 The Asus X99-E-10G WS is an update to one of the top-end motherboards for Intel's fifth generation of Core i7 processors. This is the first chipset (X99) and line of CPUs to use DDR4 memory, and this specific motherboard is configured to allow a host of PCI-Express cards to be used with it. Normally the number of such cards that can be installed is limited by the PCI-Express lanes provided from the CPU - either 28 or 40 on this platform, depending on the CPU model that is installed. However, the X99-E-10G WS uses a pair of PLX chips on the motherboard to expand the usable number of PCI-Express lanes dramatically. A full four PCI-Express x16 cards can be used at full speed, or up to seven with one at x16 speed and the other six at x8.

In addition to the massive number of PCI-Express slots, the X99-E-10G WS also features a rarity on motherboards of this era: dual 10Gb Ethernet ports. These are great for high-speed network setups, which are becoming more common in areas where high-end workstations are used. These network ports are backward compatible with 1Gb and older networking standards as well.

A lot of other connectivity is included too. Four USB 3.0 and two USB 3.1 ports are present on the back panel, along with full analog and digital audio connections. Internally, 10 SATA 6Gbps ports are available for drives along with both M.2 and U.2 - both of which are new, high speed drive connections for solid-state drives.

William George (Puget Labs Technician) Says:
Holy PCI-Express lanes, Batman! The X99-E-10G WS is a great solution if you need to stack a single-CPU system full of expansion cards. If you want more CPU performance at the same time, the Asus Z10PE-D8 WS also has quite a few PCI-Express slots. In either case, you may want to talk with one of our sales consultants to make sure you have enough power and cooling to run everything that you have planned.
Model: Asus X99-E-10G WS