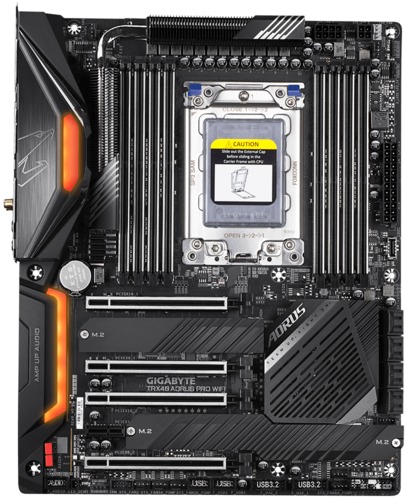 The Gigabyte TRX40 AORUS PRO WIFI is an ATX size motherboard for AMD's third generation of Threadripper processors. In addition to the sTRX4 socket for the CPU, it has eight RAM slots supporting up to 256GB of DDR4 memory and four full-length PCI-Express slots. Unfortunately, due to the slot positioning, only three GPUs can be used - and the second and third will connect to the system with x8 lanes rather than x16. The chipset supports PCI-E 4.0, however, so when used in combination with PCI-E 4.0 cards these slots provide twice the bandwidth of the previous generation.

A wide range of connectivity is provided as well: nine standard USB ports, one of the new USB Type C, gigabit Ethernet, WiFi, Bluetooth, and both analog and digital audio. Internally it has eigh SATA ports and three M.2 connectors, with included heatsinks, allowing for a flexible array of storage options.

William George (Puget Labs Technician) Says:
It is unfortunate that this motherboard doesn't support quad GPUs, but for many applications the new Threadripper processors are amazing - and many of the programs where it excels don't need multi-GPU support anyway.
Model: Gigabyte TRX40 AORUS PRO WIFI