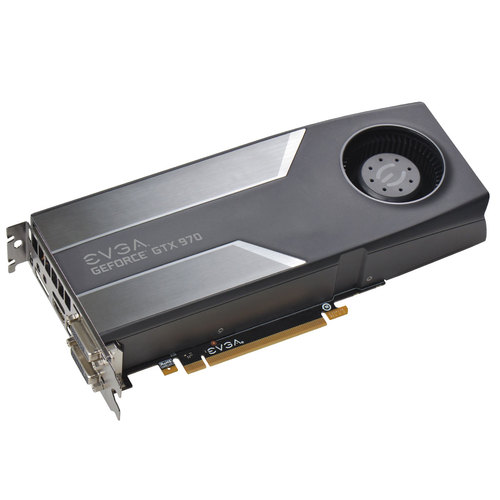 NVIDIA's GeForce GTX 970 is one of the first high-performance graphics cards using their new Maxwell GPU architecture, positioned directly below the flagship 980. The main thrust with this new design is efficiency, rather than a big increase in performance - but it still manages to match or beat the previous generation GTX 780 in gaming tests. More importantly, the GTX 970 reaches that level of performance with much lower power usage and heat output than the 700-series. That translates directly to lower temperatures and quieter operation.

In addition to its great efficiency, the GTX 970 inherits other features common to the GeForce line. It is excellent at maintaining good frame-rates in games, not dipping too low even in graphics-laden titles, and includes support for CUDA, DX11, and NVIDIA's 3D Vision technology. Finally, it supports up to four usable monitor outputs: 2 x DVI, HDMI, and DisplayPort.

Josh Raye (Product Manager) Says:
I'm very impressed with the GTX 970's performance and power consumption, but this particular card is not as quiet as the others we carry. That said, it does have it's purpose. If you are going SLI in a low airflow chassis, this could be the one to choose.
Model: EVGA 04G-P4-1970-KR