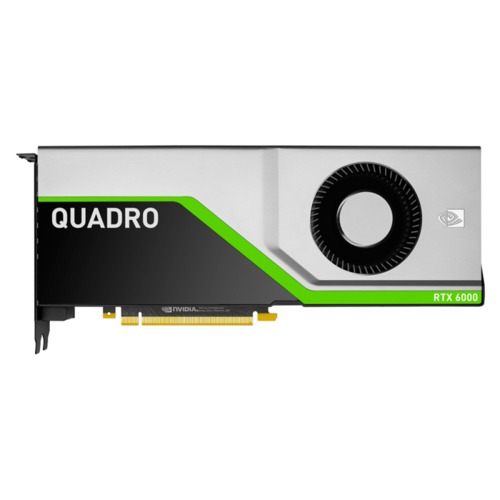 The NVIDIA Quadro RTX 6000 is the first Turing-based Quadro card, offering the best single card performance available in this generation. Because of the Turing architecture it also gains specialized ray tracing and machine learning inference hardware as well: RT cores and Tensor cores, respectively. The more expensive Quadro RTX 8000 is effectively the same card but with double the already massive 24GB of VRAM this model has. As with most Quadros, the single-fan cooler on this card is ideally suited for use in multi-GPU systems.

In addition to extreme performance for professional 3D applications, the Quadro RTX 6000 also supports up to four monitors at the same time. It sports four DisplayPort connections, along with VirtualLink - a specialized Type C port combining DisplayPort, USB 3.1, and power for single-cable connectivity to next-generation VR headsets. Using that counts toward the limit of four simultaneous outputs.

William George (Product Development) Says:
This graphics card is very similar to the NVIDIA Titan RTX in specs, with the same CUDA and RT core counts as well as onboard memory capacity (24GB). The RTX 6000 does have ECC protection on the memory, which is handy, and being in the Quadro line means it may have more specialized drivers and better support for certain high-end applications. The biggest practical difference, though, is the cooling: this card has a fan layout that works great with multiple GPUs in a single workstation or rackmount chassis, while the Titan RTX has a dual-fan design that limits it to use as an individual card.