The two main factors in virtual reality performance are the CPU (central processing unit, often referred to simply as the processor) and GPU (graphics processing unit, which is the main chip on a video card). In most situations this is very similar to how traditional computer games work but with a heavier emphasis on graphics and more user inputs to keep track of.

For virtual reality, the processor is responsible for keeping track of what is going on in the simulated world, any computer controlled character AI, input from the player's head mounted display and hand controllers, etc. The video card handles displaying the game and calculations involving lighting, shading, special effects, and more. What makes VR especially demanding is that the display for each eye has to be rendered separately since they originate from slightly different positions. That is required to give the 3D perception effect that is integral to the VR experience. Each eye's display is also fairly high resolution, and needs to refresh quickly for a fluid feeling when moving.

Because of the way the workload for virtual reality is split up you need to have a good balance between the CPU and GPU... but with a greater emphasis on the GPU. The level of realism in the specific VR experience you are using will impact how powerful the video card needs to be, but especially for the more photo-realistic games and demos a powerful graphics card is a must.

Memory and storage systems in a computer also play a role in VR performance, as they do in all computer-based applications, though not as much complexity is involved in the selection of those components. What follows is a general overview of what hardware is important for virtual reality and related applications.

Virtual reality experiences are a lot like games - whether they are intended to be educational, entertaining, or actual interactive games. VR as an industry is still in its early stages, but the software we have seen so far bears great similarities to modern computer gaming. Frequency (clock speed) tends to be more important than having lots of cores since, that impacts how many calculations each core can handle per second. Therefore, dedicated virtual realty systems are usually best off with a low core count CPU at the highest possible clock speed.

Computers for developing virtual reality content, on the other hand, can often benefit from additional CPU cores. It depends a bit on what software packages are being used, of course, but many 3D manipulation and rendering programs scale well with multiple cores. Stereoscopic video editing requires a lot of horsepower too. A lot of developers and artists will also run multiple programs at the same time, and may need to have debugging tools or other applications running at the same time as they are testing out their VR software.

For those creating VR content, rather than enjoying or viewing it, take a look at our content creation and game development workstations instead. Note that if you go for a higher core count processor you don't want to sacrifice too much clock speed. Base frequencies don't matter much now, thanks to near universal adoption of "turbo" modes on modern CPUs, but ensuring that your CPU will maintain at least 3.4GHz under load is important. When testing out a VR experience you want to make sure you have plenty of speed for the few cores that will be utilized.

Having a powerful video card is critical for virtual reality performance as it directly impacts the ability of the computer to keep up with the high resolution and frame rate which a good VR experience requires. The initial release versions of the HTC Vive and Oculus Rift both have dual displays, one for each eye, at 1080x1200 resolution. These run at 90Hz, which is 50% higher than the standard refresh rate of monitors, and the perspective of each eye is slightly different so it is actually rendering two distinct views rather than just a single, larger display. Some VR head mounted displays also require off-screen rendering of an area around the actual display that each eye is given, which requires further resources from the video card. Here is a chart of four common monitor resolutions with the effective resolution of a HTC Vive overlayed for comparison: 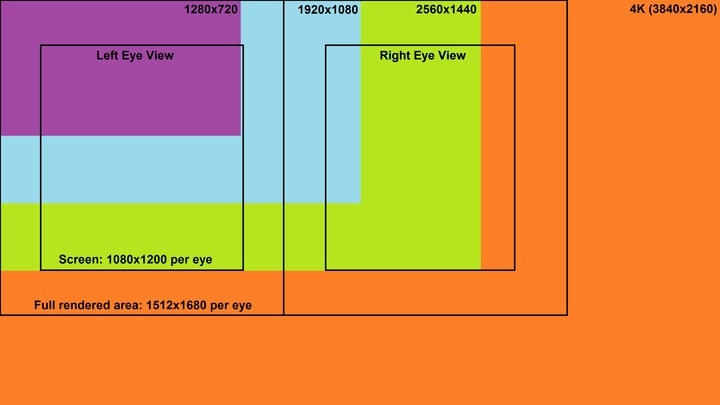 More realistic looking graphics - usually achieved by having more polygons in 3D models and more detailed textures - give the video card even more work than normal to do. The number of objects being displayed on-screen at a time also affects this. Having a higher number of more complex models being displayed takes up more of the video card's memory buffer as well, impacting how much VRAM is needed. And finally, cranking up the quality settings within a VR experience to have more realistic shadows or reflections, or to smooth out jagged edges of objects, further increases the workload of the video card.

Within NVIDIA's GeForce RTX family, the RTX 3070 Ti 8GB is generally a safe entry point into VR. If you want to be able to crank up graphics settings, or be better equipped for future VR headsets with higher resolutions, then going higher in NVIDIA's GeForce lineup improves performance even further and increases real-time ray tracing capabilities.

Because of the nature of rendering two separate views, one technology being worked on is OpenGL multicast which uploads the same scene to two different GPUs and renders it from two different viewpoints. However, as of this writing very few - if any - programs support it yet. For the time being a single very fast card is generally the best solution.

Memory requirements for virtual reality experiences vary dramatically, but most fall in the 2-8GB range. Newer programs and games are starting to push further, though, and many users may want to run other software in the background as well. Due to this we recommend 32GB for most systems, to have plenty of space for applications and a measure of future-proofing. For VR developers, we recommend 64GB or more depending on the full suite of software being used.

With the falling costs of solid-state drives we strongly recommend using a SSD for the primary drive that will host your operating system and VR experiences (as well as any other software you use). The high speed of SSDs allows your system to boot up, launch programs, and even load media many times faster than a traditional hard drive.

The main question then becomes capacity. Different applications and experiences need wildly different amounts of space to be installed: from less than 1GB to potential sizes of 100GB or more for next-generation games or open-world experiences. To avoid running out of space frequently we recommend a minimum capacity of 500GB for the primary drive, but 1TB is a much safer choice to ensure plenty of space for multiple VR games and experiences. Further storage for other types of data can also be added - either when the system is built or later on. For pure data storage like music or videos, traditional hard drives are also viable options.

See which Virtual Reality Workstation is right for you!