Skip to content
At Puget Systems we offer a number of motherboards, some of which include wireless networking capabilities. This is often referred to as 802.11 A/B/G/N or AC.
A good rule of thumb when it comes to connecting to the internet is that wired beats wireless in terms of speed and reliability. A wired network is also far less susceptible to interterference. If you have the option of connecting to the internet via wired or wireless, we recommend using a wired connection.
But sometimes running an ethernet cable to your computer isn't an option. This is where a wireless connection can come in handy, and we've created this article to make sure you're taking full advantage of the motherboard's wireless capabilities.
If you've purchased a Puget Systems system that included onboard wireless, you'll want to make sure you've attached the wireless antanna to the back of your new PC. We attach this antenna while testing your system, but then we package it up and place it in a plastic bag found alongside the rest of the extra parts and manuals in the white retangular box we include with all new PCs.
Here's an example of the antenna you're looking for on a newer PC using the Asus X79 Deluxe motherboard that attaches to the back of your computer via two connectors. 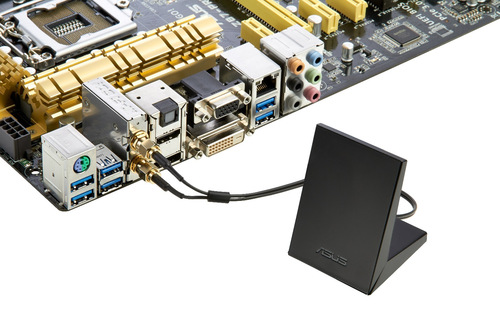 Older Asus motherboards have white anntennas that have a single connection point. This an example of the anntenna included with the Asus P9X79 Deluxe motherboard. 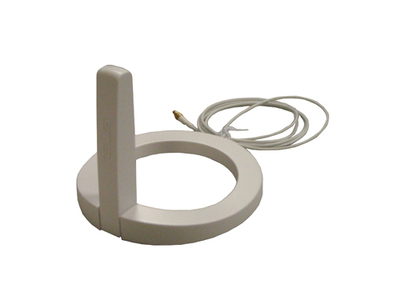 We also sell standalone wireless adapters that include an antenna you'll need to attach to the back of your computer and then position, ideally in a manner with the most direct path to your wireless router. Here is what our current Intel 7260 wireless and Bluetooth adapter looks like when attached. The green part will be inside your PC so you'll need to look for the two connection points off the back of your PC. 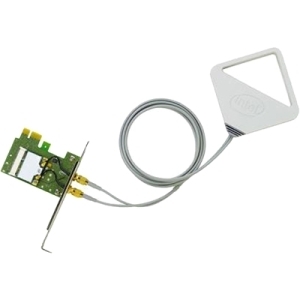 So to recap: If you can connect your computer to the internet via wired connection, that's your best bet. If that's not an option, then make sure the antenna is attached to the back of your computer for the best wireless performance. It helps to position the antenna as high as you can get it off the ground, and as close to a straight shot from your wireless router as possible.
The antenna can be found in the white box of extra parts included with your new PC.
If you have questions about the motherboard that came with your Puget Systems computer, please call or email support.
Tags: 802.11, WiFi, wireless