Read this article at https://www.pugetsystems.com/guides/182

Always look at the date when you read a hardware article. Some of the content in this article is most likely out of date, as it was written on February 5, 2013. For newer information, see our more recent articles.

Testing how the memory configuration affects the performance of Photoshop CS6 is not as easy as testing how the speed of the RAM affects performance, but it is certainly possible. Unfortunately, the results are a little bit messy and require some effort to see exactly what is going on. 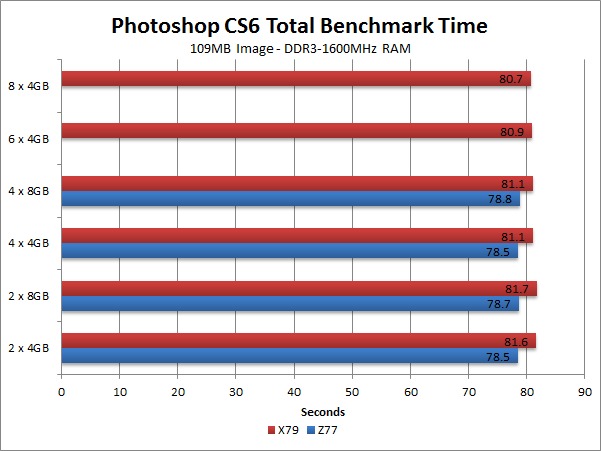 As for the size of the memory, our testing shows that there is no change in performance by using larger physical sticks of RAM. So if you are going for the absolute best performance possible for this size of images, you are slightly better off going with more 4GB sticks than fewer 8GB sticks. Whether a performance increase that is smaller than 1% on GPU accelerated effects is worth the more limited upgradability is something that each user will have to decide for themselves. 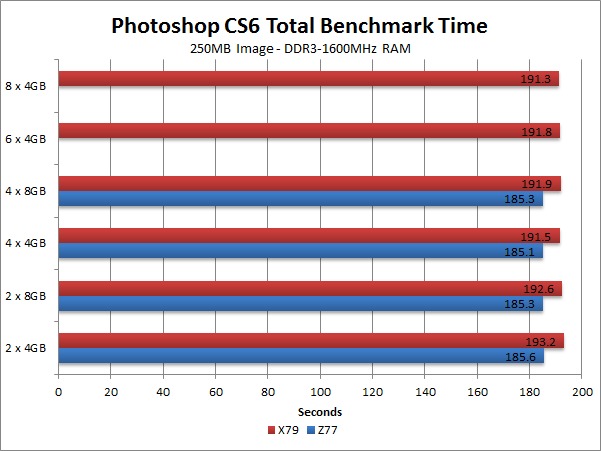 Upping the image size to 250MB shows similar results to the benchmarks with the 109MB image. The Z77 system in particular shows pretty much no difference going from two to four sticks of RAM. The results for the X79 system on the other hand, are slightly different. This time, moving from four to six sticks does not show any performance increase at all. Going up to eight sticks, however, does show a small .3% increase in performance. So for X79 systems, there is once again a small performance increase going with four sticks over two sticks, but after that the increase in performance is so small that it is not worth worrying about.

As for the size of the memory, our testing once again shows that there is no change in performance by using larger sticks of RAM. So if you are going for the absolute best performance possible, you are again slightly better off going with more 4GB sticks rather than fewer 8GB sticks. Again, a performance increase that is smaller than 1% is likely not worth the more limited upgradability, but that is something that each user will have to decide on their own.

Serious Photoshop users want top of the line, I7 just isn't enough anymore, multi quad or higher processors are in with high end graphic and gpu cards, this ain't your daddys Mac

i7 on the Ivy Bridge Chipset at a high enough Clock Speed on Quad Core is more than sufficient for high end photoshop when paired 4-8GB of RAM Core. I go into a detailed explanation breaking down the component specs you need to look at for Photoshop CS6 and why they matter

There really isn't that much support for what you say. I Use an i7, 4Ghz, 32 g RAM, GeForce GTX 960 and everything I do is immediate. Any further increase in speed would not be perceptible. My machine at work is an 8 G Ram i5 using the MoBo graphics and it handles PS 6 and CC with immediate response.

I work with large files and images 60 inches wider or more and have ZERO problems with 32 gb of RAM. I am sure I would not notice if I pulled half of out.

With Photoshop a lot of it comes down to file size. Not physical dimensions or even MP count, but the actual file size when uncompressed and being edited. The 32GB you have should suffice for image sizes up to about 1.5GB... but there are some folks working with even larger image sizes. I've talked to folks doing image work for art that goes on the side of race cars and the trucks that carry them, and those are *massive* image sizes... and I bet they aren't the most demanding out there. So while many photo editors may be fine with 8GB, and you are fine with 32GB, some users do have legitimate need for 64GB, 128GB, etc.

Maybe..but I did a mural outlay that was close to 25 feet across..and did it with 32 gb. Some folks NEED an elephant gun..most that have them don't NEED them though.

It's my guess there really aren't enough folks doing the kind of work you speak of to merit melding their needs into the masses of folks that don't do that. Their work is an outlier and a small niche that would best be left to private discussion amongst them.

I use a d800 and d4 both of which produce large file sizes in NEF. I stick them on a solid state drive and bridge opens gig upon gig of them in a flash. I think if you want speed you might want to think about the other parts of your machine.

Summing up what everyones saying. It really depends on your use.
I do digital paintings which are between 1-3 meters x 1 meter.
so thats 100 x 200 cm, 300-400dpi, a few hundred layers...
So my 32gig ram, a few ssds, i5quad core, and med spec vid card isnt really cutting it. I am getting by, but holybean sprouts i could do with more speed.

My photoshop files are between 10 - 30 gigs each file... so more speed needed without totally breaking the bank!

That's some crazy big files you are working with. I've never tested anything that large, but I can see why you want more RAM.

One somewhat unrelated thing I'm curious about is what you think about hard drives like the Intel 750 (2.4GB/s read, 1.2GB/s write - https://www.pugetsystems.co.... Do you think that a HD that fast could be used as a decently performing scratch drive for when Photoshop needs more than 32GB of RAM? I ask because if you need more than 32GB of RAM you have to move up to a Socket 2011 CPU which are not as good as something like a i7-4790K at lightly threaded tasks like Photoshop. I've been wondering if it is worth it to give up some CPU speed to get the additional RAM, or if is it better to keep the faster CPU, stay at 32GB of RAM, and use an Intel 750 NVMe drive as a scratch drive.

Thats very interesting Matt, I think that drive as a scratch disk would speed things up even more!!
I'm not too sure on the cpu vs discussion...i know that once you go for 2011 socket every thing becomes $$$$ and faster of course! ðŸ˜‰

All brush processing is done with CPU, GPU is only used to move and rotate canvas, and I believe it reduce the lag feel by trying to show a intermediate bitmap (not the real file) work, while Photoshop take longer to apply the real task on background. this is why someone with a i7 6700 and a GTX 1080, still today get a slow behavior from some huge diameter tools.

I have a PC with configuration i72600K 16GB ram,128GB SSD,1TB HD 7200RPM.using software's coreldraw x6,indesign cs6,illu cs6 but still the application are working very slow.so plz suggest me the best configuration so that i can use these apps simultaneously without loosing the speed.and i am planning to configure intel xeon with dual processor with 12 cores.so is it ok or not

The CPU doesn't do squat in Photoshop but if you are working with any kind of graphics you csn count on seeing a spinning wheel plenty with under 32gb while rendering.

I don't really think you can call yourself a "serious photo shopper" or "pro" if you are yakking about hardware. Enough is enough and a pro doesn't waste money on overkill. If you are getting paid for what you do what you want is quality work. That's going to take time and adding 32 gb of ram to a machine that alreaddy packs 32 isn't going to make your work better and it will not make it go perceptibly faster. Equipment yaks ( what lens did you use ) are not the conversations of pros.

Hey. Not sure if you mean me, but i think my file sizes are so big because its crazy details, large colour gamut and loads of layers. All hand drawn. No photos. ðŸ˜‰

In terms of information per pixel, large color gamut did not increase image size, only bit depth, you need greater bit depth to avoid banding, but surprisingly 16 bits per channel will be more than enough even for linear color spaces, and even if you worked with some kind of HDR painting, 16 bits float would be enough to securely avoiding banding in a good range of tone values, not only in representation but in manipulation too.

I did not doubt you get 32 GB images, but you did not really need 32 GB RAM to work with 32 GB in ROM size images, especially on a brush centric task, PS is more than efficient on caching, it did not need to have all real image in memory. I may paint as a hobby but as a TI person, I can securely say you PS do many well done magics to avoid getting all image in RAM, perfectly fine with it. I believe most certainly CPU and GPU are your bottleneck for a mix of reasons.

higher performance with high powerful cpu will be best for working with photoshop.

I'm doing a lot of verry large panoramas. we'r talking >3GB files.
Has someone seen a graph how photoshop scale sin the "not enaugh RAM" domain?

Thanks for your effective information.But for the high end photoshop performance,there must be need some upgrade version.

I ran across this test, but I am highly suspicious of the results. Do you think anything has changed regarding RAM frequency and Photoshop?

This article is 6 years old at this point, but the TechSpot article you linked is two years old as well. Things have changed a bit since both of these articles. We haven't specifically done Photoshop testing on RAM speed in a while, but what we tend to see is that in real-world situations, RAM speed makes minimal difference with Intel CPUs, but up to 10% or so difference with AMD CPUs.

However, using RAM above around 2666 tends to be less reliable. There are plenty of people using higher frequency RAM with no issues, but we have found that going above what the CPU is rated for (2666 in most cases) causes an increase in risk. So we really wouldn't use higher frequency RAM even if it was a good deal faster since we value stability and reliability very highly in our workstations.

Thank you for the update :)

Any suggestions on how to increase speed when working with gigafiles?

Here's my problem and my computer spec.

I will get this amazing for me .thank you!…

Hey Matt Bach, your post is really helpful and informative for Photoshop users. Thanks for sharing for your post.