In addition to the type of the antenna, the key differentiation between antennas is the gain, which is typically reported in dBi. The higher the gain of the antenna, the stronger the signal it can send and the weaker the signal it can receive. In terms of PC wireless, a higher gain antenna should always give you much better signal strength within your wireless network.

It's worth noting that even Omni-directional antennas do not send signals in a perfect sphere. Every antenna is slightly different, and each will have certain areas in which the signal is either stronger or weaker. This variance in signal strength is referred to as the radiation pattern of the antenna and is generally shown by a pair of diagrams depicting the pattern on both a horizontal plane (also called a Azimuth Plane Pattern) and vertical plane (also called an Elevation Plane Pattern).

Antenna radiation patterns are not a direct indication of signal strength, but rather a visualization of the direction in which the antenna transmits and receives signals at a specific level. Because of this, the scale of the pattern is completely irrelevant. In the next section, you will see that the 2dBi and 9dBi antennas have the same horizontal scale even though the 9dBi antenna is much, much stronger. Antenna radiation patterns can basically be thought of as an ever-expanding shape where the current scale indicates the areas where the signal strength should be the same. Of course, this is an ideal pattern so physical objects such as walls can distort the radiation pattern.

With that said, let's take a look at the relatively simple radiation pattern for a Cisco AIR-ANT2422DW-R 2dBi Omni-directional antenna: 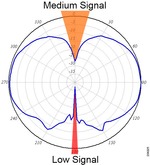 Since this is an Omni-directional antenna, the signal strength on the horizontal plane is consistent in every direction. On the vertical plane, however, the radiation pattern takes on a shape resembling two circles smashed together. Note that at the top (0°) and bottom (180°), the shape of the radiation pattern is bent towards the origin. This means that directly above and below the antenna there is an area where the signal strength is at sub-optimal levels. Since the dip in the top of the pattern only goes about halfway to the origin, the signal strength above the antenna, while greatly reduced, is still at useable levels. The dip at the bottom, however, goes almost all the way to the origin indicating that directly below the antenna there will be a small area with almost no signal propagation.

In the real world, this means that you will want to avoid having any devices directly above and below the antenna. Most antennas are designed to be able to point in nearly any direction, so if you do have a device directly above or below the antenna, you simply need to reposition the antenna so that the device is covered in one of the higher signal areas as shown in the radiation pattern.

If you would like a more in-depth and technical understanding of antenna radiation patterns, we recommend reading Cisco's Antenna Patterns and Their Meaning article.

For our antenna selection, we decided to exclusively use Cisco models since Cisco has a wide variety of antennas, all with manufacture-published radiation patterns. Our thought process in choosing specific antennas was simply to look for consistency in the radiation pattern compared to other antennas of the same type and power.


Omni-directional antennas transmit in all directions, so the near identical patterns on the horizontal planes are completely expected. One very important detail on the vertical plane is that the higher the gain of the antenna, the more complex the radiation pattern becomes. The 2dBi antenna has a very smooth, mostly round shape on the vertical plane while the 9dBi antenna has a very complex pattern with lots of low and high areas. In general, however, we can take from these patterns that Omni-directional antennas work best on a horizontal plane.

So if you have two devices with Omni-directional antennas, it is best to have the antennas parallel to each other (not pointing tip to tip) so that the high signal areas overlap. 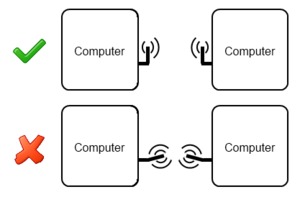 While radiation patterns are great for showing how and why you should orient antennas properly, they do not show the actual real world difference the gain of an antenna has on signal strength. To find this out, we again used a Puget M550i laptop and a wireless router to take multiple signal strength readings throughout out office. Unlike our previous testing, we will be using an Asus router since it has removable antennas which will allow us to test three different antennas. 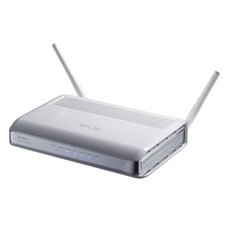 Our office at Puget Systems has plenty of walls, a second floor, as well as a large open warehouse space. This should give us a great look at how the signal strengths of each of our three antennas compare in various environments. The wireless router was positioned on the first floor in the corner of our office (shown as a blue icon on the heatmap). To record the signal strength, we used the third part utility NetSurveyor.


On the first floor, the 9dBi antenna provides about 8% better signal strength than the generic 2dBi antenna. This may not seem like much, but it is essentially the difference between a useable and non-useable wireless network at the far end of our warehouse. The 5dBi semi-directional antenna performed only about 2% better than the generic 2dBi antenna, and luckily the cone shape did not result in any low-signal areas.

What does this data mean? Basically, it confirms that higher dBi antennas do provide a better signal strength, but the increase might not be as much as expected. It is definitely worth upgrading your antennas if possible, but upgrading antennas will likely only result in a moderate boost in wireless performance.