Skip to content
Always look at the date when you read an article. Some of the content in this article is most likely out of date, as it was written on July 16, 2012. For newer information, see our more recent articles.

The majority of DDR3 RAM runs at 1.5V, but many performance models can run at voltages as high as 1.65V. Low voltage RAM, on the other hand, can run at voltages as low as 1.25V. In addition to simply consuming less power, RAM that runs at a lower voltage is also typically more stable since less voltage typically means less heat. When it comes to low voltage RAM, there are three main questions that often come up:

To answer these questions, we acquired two different models of low voltage RAM and compared the performance, power draw, and thermal properties against our current performance RAM. For our testing, we will be using four of each of the following models:


Note that even though the Patriot Viper Xtreme is rated to run at 8-9-8 timings, we will be reducing it to 9-9-9 to match our low voltage RAM. This will reduce the performance, but we want to test how low voltage RAM performs compared to standard RAM of the same specification.

To perform our testing, the following hardware was used:

To thoroughly test for any thermal or power draw differences between each model, we took power and thermal measurements at both idle and full load. Power draw readings were taken using a Power Angel power meter.

To fully load the system, we ran a combination of Prime95 and Furmark for ten minutes. This will cause much higher temperatures than any normal user is likely to see, but will give us a clear worse-case scenario for cooling and power draw. Temperature readings were taken from the hottest core of the CPU (Core 0 on our test CPU) as well as from the video card with a margin of error of 1°C. In addition to the thermal readings, we also used a thermal camera to look at the overall system temperatures at both idle and load. Performance benchmarks were taken using our standard set of benchmarks which includes Unigine Heaven Pro, DiRT 2, X3: Terran Conflict, Geekbench, CineBench R11 and various other benchmarks to test a wide variety of the system's performance.

After running our full gambit of benchmarks, we can say pretty conclusively that low voltage RAM performs exactly the same as standard voltage RAM. But since leaving it at that would make this section awfully short, let's take a look at a small sample of the benchmarks we performed: 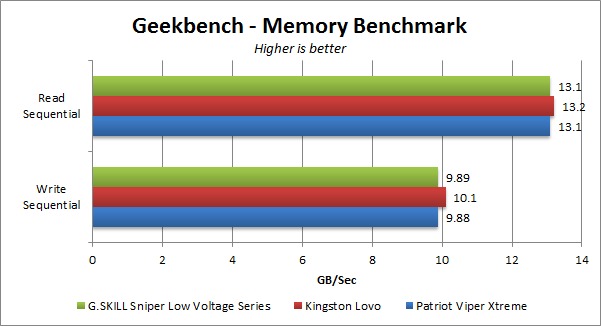 Geekbench is a processor and memory benchmarking utility that is one of the more recent additions to our benchmarking lineup. The sequential read and write portion is just one of many tests, but it accurately reflects the overall results. Although the Kingston Lovo is technically to top performer, the results are all well within our margin of error indicating that all three of our test models are effectively identical for this benchmark.

Handbrake is a video encoding benchmark that is a very good indicator of real world encoding performance. In this benchmark, the Kingston Lovo has a very slight lead, but it is once again within our margin of error. 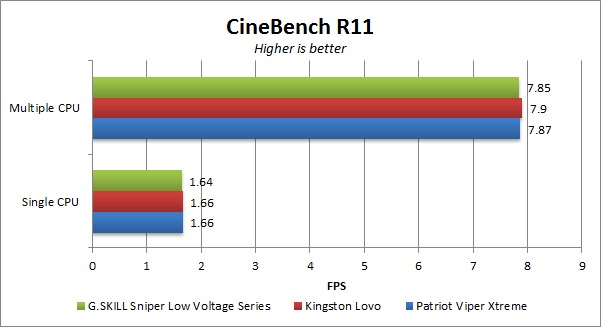 CineBench is a great benchmark to measure CPU performance, but is also decently affected by RAM performance. Once again, our results are all within our margin of error. 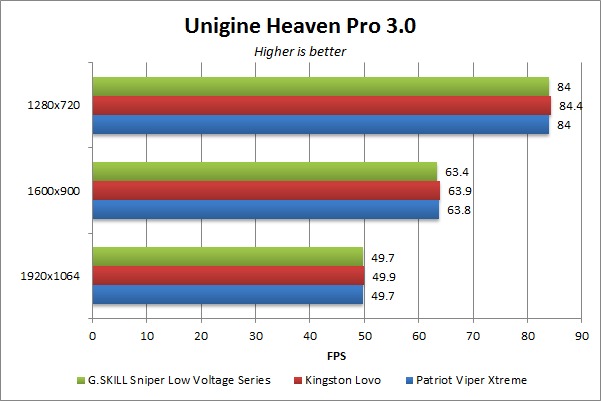 Unigine Heaven Pro 3.0 is a DirectX 11 benchmark that we ran with 8x AA and 16x AF to try to accentuate any performance variance. Unsurprisingly at this point, the results are all within our margin of error with less than a .5 FPS difference between the highest and lowest results. 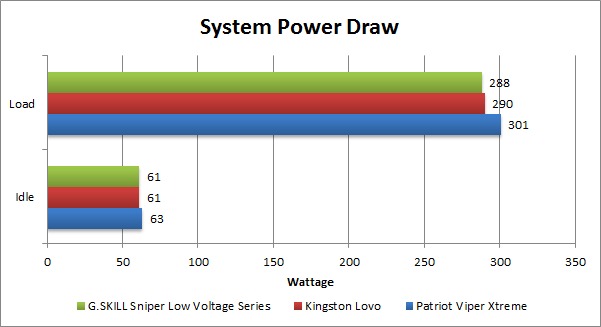 We expected to see a little variance in power draw, but with the system pulling nearly 300 watts at load we expected the results to be somewhat minimal. We were pleasantly surprised to see that the low voltage RAM reduced the overall system power draw by a decent amount when under full load. The 11 and 13 wattage reduction from the Kingston and G.SKILL sticks works out to be about 2-3 Watts per sticks, for a total system power reduction of 3.65% and 4.32% respectively. For a component like RAM that only uses 1.25-1.65V of power, this is a much higher number than we anticipated, and great news for low voltage RAM. 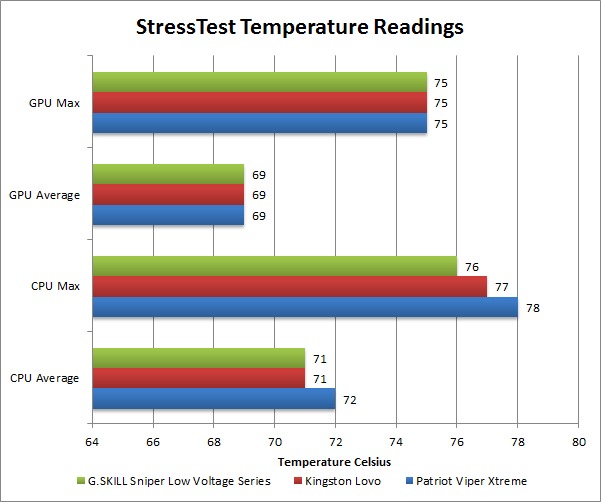 Since the GPU is positioned below the RAM, it is not surprising that the GPU temperatures were completely unaffected. What was surprising was that the low voltage RAM did result in a 1-2 °C drop in the average and maximum CPU temperature. While this drop is not huge by any means, it does clearly show that using lower voltage RAM does slightly improve system temperatures. What this data does not show is how hot the RAM itself is running and how the voltage affects the various motherboard components surrounding the RAM. To find this out, let's take a look at our thermal images:

We set out at the start of this article to see how low voltage RAM compared to standard RAM. We can now confidently say that low voltage RAM fares very well against standard RAM. Versus RAM of the same frequency and timings, it performs just as well as standard RAM while reducing the overall power requirements by 2-3 watts per stick. This power reduction also allows to the RAM to run much cooler than standard RAM. While this did not translate into significantly lower CPU or GPU temperatures, anything that reduces heat without sacrificing performance is a good thing in our view.