We have plenty of experience with virtualization (all of our servers use virtual machines) and basic remote desktop, but this was our first experience using virtual desktops of this level. There are plenty of easy ways to get a basic virtual desktop, but getting GPU acceleration to work introduces quite a few hurdles into the process. Frankly, we were a bit daunted at the beginning when we saw how much infrastructure and setup was required for either XenDesktop or VMWare Horizon View, but once we got started we found that the documentation was so good that at times it felt like putting together something from Ikea. Sure, the guides themselves were huge, but when each page is just "click this button, now click this one" it is very easy to follow.

Once we had everything setup and started using the virtual desktops, we were overall very impressed with both the video quality and performance. It really looked just like a local desktop; just running at 30 FPS rather than 60 FPS. The 30 FPS limit was definitely noticeable depending on what we were doing, but for things like browsing the web, watching videos and even using Adobe Photoshop or AutoDesk Inventor there were plenty of times that we forgot that we were not using our local PC. On anything that could use GPU acceleration, we could definitely tell that the NVIDIA GRID GPU was significantly improving performance.

The biggest problems we ran into was when we tried gaming on a virtual desktop. The GRID card did its job perfectly (even though the card we used was a workstation card, not a gaming one), but many modern games have the two things that desktop streaming has the most trouble with: they have lots of visual movement on the screen and they require a minimal amount of input lag. Due to how much is going on visually in most games, we found that even at 30 FPS we had to reduce the resolution down to 1366x768 in order to minimize the stream lag. And even with minimal lag, there is always a small input delay which is pretty much unavoidable since every key input has to travel over the network to the virtual desktop.

We might not currently suggest virtual desktops for gaming, but for anything else it works very well. The NVIDIA GRID cards are very reasonable price-wise when you compare them to the appropriate number of equivalent video cards and performed pretty much exactly how we expected. The biggest hurdle for most consumers to using virtual desktops is really the startup costs of the necessary servers and special licensing requirements. Virtual desktops are not going to be the right tool for the majority users and businesses, but if you have a medium to large number of users, however, it is something we would suggest looking into. 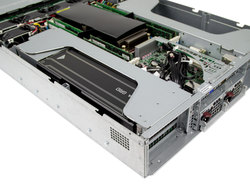 So are virtual desktops going to take over the PC market? We think that is some niche environments it will, but for the vast majority of users traditional PCs are going to be a much better choice than virtual desktops. Internet speeds and latencies are likely never going to be fast enough to provide a great user experiance, so VDIs will likely be limited to large businesses with hundreds of users on site. For those businesses, virtual desktops have both a cost advantage and are much easierto deploy and maintain than physical desktops.

Rather than virtual desktops replacing traditional PCs, one way we see virtual desktops taking off is through software companies renting time on a virtual desktop to customers who need extra computing power. For example, Adobe could launch a service that allows Premiere Pro users to rent a virtual desktop with tons of CPU power. This way, if a user has a local machine that doesn't have a ton of power, they could upload their project to a server and use a powerful virtual desktop to export the project in a fraction of the time it would take them on their local PC. This way, users don't have to constantly update their PC just to use the latest versions of software efficiency.

One neat thing right now about virtual desktops with NVIDIA GRID is that you don't actually have to take our word on how well it works since NVIDIA is offering an open, free test drive that you can sign up for. The one thing to remember is that the test drive will be running over the internet so the streaming performance will vary based on your internet speed and location. Even with the best internet connection possible, however, the performance won't be anything like what you would see on a local network. It is a great way to try out the technology and see how different applications run, but it won't be able to give you a 100% accurate portrayal of the streaming performance you can achieve with a NVIDIA GRID server running on your local network. But if you try it out, let us know what you think in the comments below!