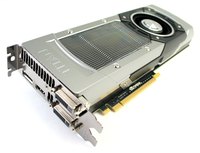 While every new component we sell goes through our extensive qualification process, we generally do not publish articles for components like video cards. This is simply due to the fact that review sites like Toms Hardware and Anandtech already do a great job reviewing these parts and any article we write would have very little to add. In this case, however, the NVIDIA GTX Titan impressed us so much that we are going to break this trend and publish our own review.

Simply put, the GTX Titan is the fastest single GPU gaming video card currently available. It uses the GK110 core which runs a bit slower than the GK104 found on the GTX 680 (837-876MHz versus 1006-1058MHz). But at the same time, it has about 40% more stream processors, three times the amount of video memory and about 33% more memory bandwidth. For all of this, it only requires about 10% more power than the GTX 680 so it should give much better performance without drawing much more power. Full specifications for the Geforce GTX Titan are available below:

As for the physical card, it is very similar to the other reference NVIDIA Geforce GTX models currently available as it utilizes the same rear-blowing fan design. The rear of the card is open, so not all of the hot air exhausts out the back of the chassis, but the vast majority does. Size wise, this card takes up two PCI slots and is about .5 inches longer than the GTX 680. One nice little touch is that the shroud includes a clear window so that you can see if you have any dust buildup within the heatsink without having to take the card apart.

There is very little "bling" to this card except for the green "Geforce GTX" text on the top of the card which is backlit with LEDs.

If you want to get down to the bare card in order to install liquid cooling, there are five steps to do so. First, remove the PCI plate on the rear of the card. Next, remove the silver shroud with the window in it that is above the heatsink. This will reveal the screws that you need to unscrew in order to remove the black shroud that is around the fan. After that, you can remove the main GPU heatsink followed by the black heatsink plate.

To test the NVIDIA Geforce GTX Titan, we used the hardware listed below:


NVIDIA was kind enough to send us three (!) Geforce GTX Titans prior to launch, so we were able to get plenty of benchmarking and testing done with the GTX Titan in single GPU, SLI, and Triple SLI configurations. We will be looking at performance benchmarks, temperature readings and power draw results for the GTX Titan and using a Geforce GTX 680 to act as a comparison. The one aspect we will not be testing is the noise level of this card since we are currently not well equipped for that type of testing. If you want to see how this card compares to others in terms of noise, we suggest checking out either the Toms Hardware or the Anandtech review article linked at the end of this article. 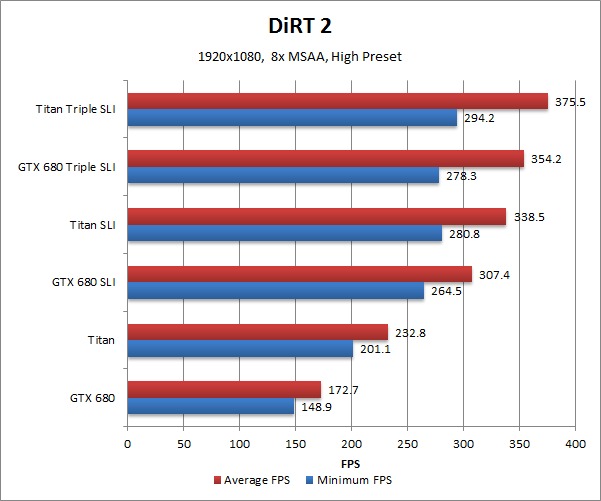 DiRT 2 is starting to become a bit aged, but we still use it fairly regularly as it is a great benchmark for slightly older titles. As you would expect, even at the highest settings the GTX Titan gives amazing FPS results. With a single GPU, we saw an average of 232.8 FPS, which is about 34% higher than the GTX 680. Unfortunately, the results for SLI and Triple SLI were not as impressive with only a 10% and 6% increase in performance over the GTX 680. We are reading well over 300 FPS at that point, however, so it is entirely likely that a more modern title will give us different results. 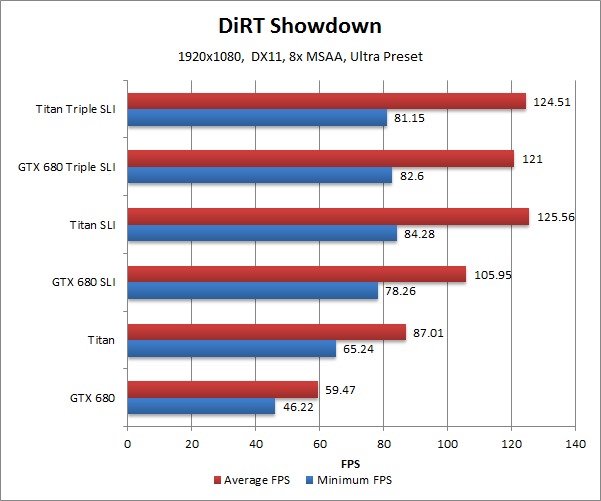 DiRT Showdown is the latest in the DiRT series and gives us some very interesting results. Starting with just a single card, the GTX Titan is very impressive giving an average FPS that is a huge 46% better than the GTX 680. Our results for SLI and Triple SLI, however, are somewhat misleading. Video cards are almost always the limiting factor in games, but in this case something else is holding back performance.

Even with this bottleneck, there are two points we can take from this benchmark. First, single GPU performance for the GTX Titan is about 46% better than the GTX 680. Second, if you are playing DiRT Showdown, you do not need SLI  or Triple SLI as you will likely be limited by the other hardware in your system. Our test system is almost as high-end as it gets, so if we are hitting a bottleneck, most users will as well. 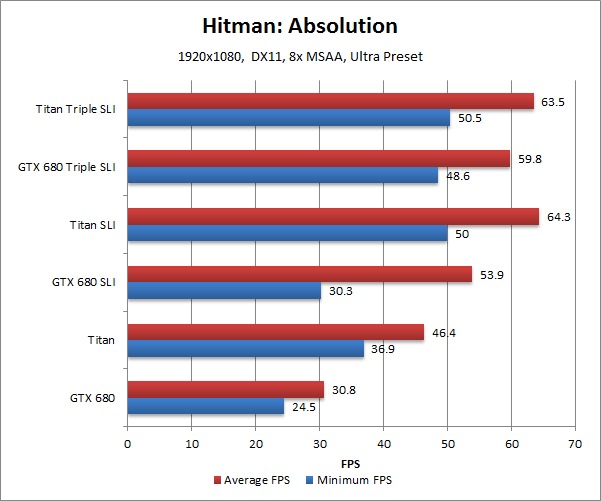 Hitman: Absolution is another title that we had bottlenecking issues with. And once again, we saw great single GPU performance (about 50% higher than the GTX 680) but our SLI and Triple SLI results are not as good as they could be. The GTX Titan was still better, but we hit a wall around 64 FPS that limited our SLI and Triple SLI scores. 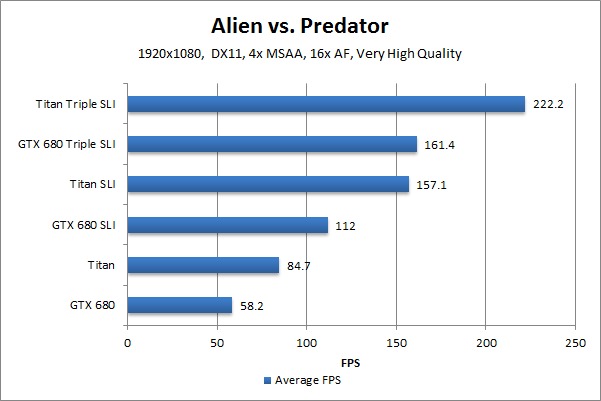 Alien vs. Predator shows excellent performance across single GPU, SLI, and Triple SLI configurations. Single GPU shows a 45% increase over the GTX 680, while SLI and Triple SLI both show roughly a 40% increase. 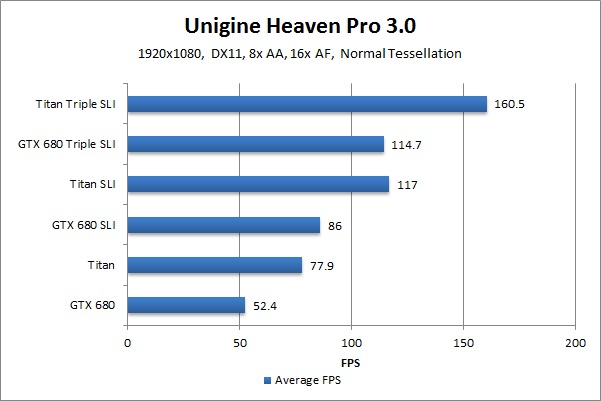 GPU temperatures are heavily affected by the chassis' cooling, and while the Antec P183 V3 is a great chassis, it is not the best choice for cooling ultra high-end components. However, we use the Antec P183 V3 in most of our testing, so even though we expect to see higher temperatures than we would like, we will still be using it in our testing as it will act as a good benchmark for comparing the GTX Titan to other cards that we did not specifically test in this article. 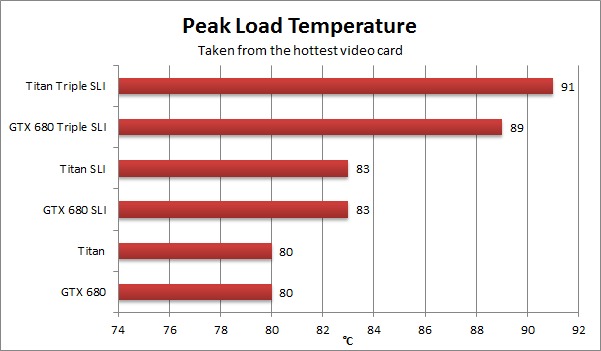 The difficult part when it comes to video card cooling is the fact that modern video card use fans that throttle as needed to keep the card running both cool and as quiet as possible. This is great, but presents a challenge when trying to compare the cooling of two different cards. Temperature alone is not enough since the cooling of each card may very well be tuned differently. To help with this, in addition to the thermal results we also recorded how fast the integrated fan spun when the system was put under a 100% load. 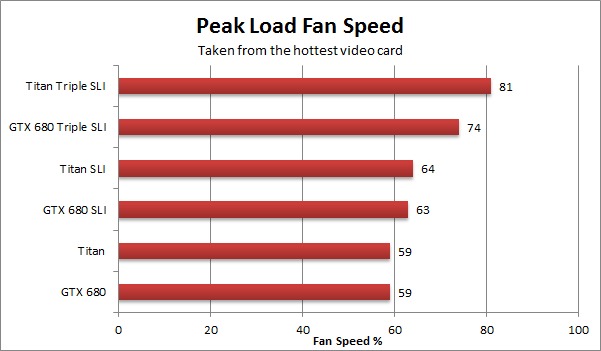 What is really interesting is that even when the GTX Titan was running at 91 °C, the fan was still only running at 81%. From this, we can conclude that 91 °C is actually a (supposedly) safe operating temperature for the GTX Titan. If it was not, NVIDIA would have the fan set to ramp to 100% before this temperature. Still, we would recommend trying to keep your GPU below 90 °C if at all possible. The GTX Titan uses GPU Boosting that is in part affected by temperatures; so the cooler you can keep this card running, the (slightly) better performance you should see. 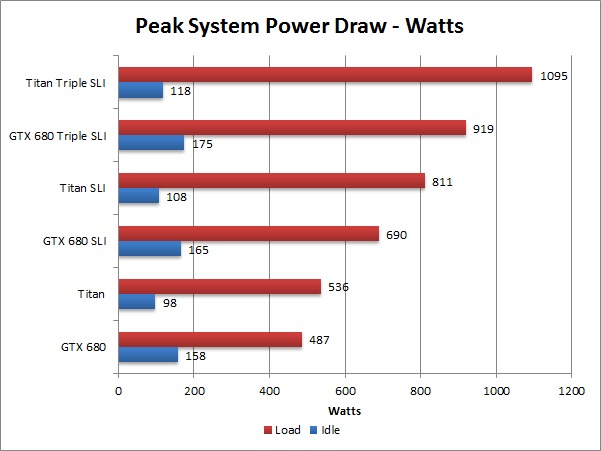 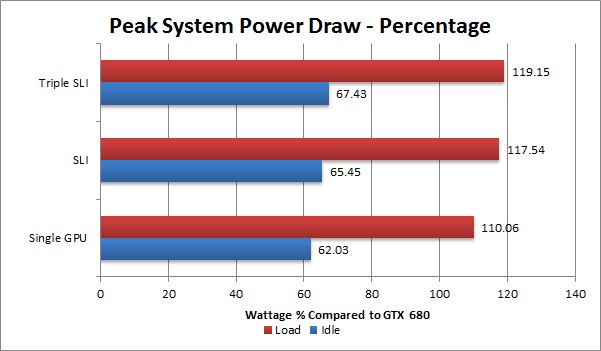 In terms of power draw as measured from the wall, the GTX Titan is very impressive. Especially at idle where it only uses about 62-67% of the power that the GTX 680 uses. It's great to see the idle power draw drop so significantly since most computers tend to be at idle or near idle levels for a decent amount of time.

Power draw at load is higher than the GTX 680, but surprisingly only by 10-20%. Considering that we saw roughly 40% better performance than the GTX 680 in our benchmarks, this makes this card very efficient when it comes to power draw.

There is no denying that the NVIDIA Geforce GTX Titan is a very, very impressive video card. It is easily the fastest single GPU card available, beating the GTX 680 by as much as 50% in some benchmarks. What is even more impressive is that the worst performance increase we saw when comparing the GTX Titan as a single GPU to the GTX 680 was a 34% performance increase. So, based on the benchmarks we performed, you should expect at the very least roughly 30% better performance than the GTX 680 with the GTX Titan. Even better, the GTX Titan only uses about 10% more power than the GTX 680 and has cooling that is nearly identical. So from a power supply and cooling standpoint you can basically consider the two cards identical.

As you would expect, the GTX Titan does cost more than the GTX 680, but if you want the absolute fastest single GPU video card available, this is it. Also, once you get into SLI and Triple SLI, you may run into the problem of the GTX Titan actually being too fast. Modern games are usually limited by the video card (unless you are using hardware that is very mismatched performance-wise), but two of our game benchmarks ended up becoming limited by things other than the video cards. This isn't to say that SLI and Triple SLI are a bad choice, but rather that this card is so powerful in those configurations that you need to take a close look at the rest of your system to make sure that it is up to snuff. You don't want to put down the money for three of these bad boys just to find out that you also need to upgrade your CPU, RAM, or other hardware. 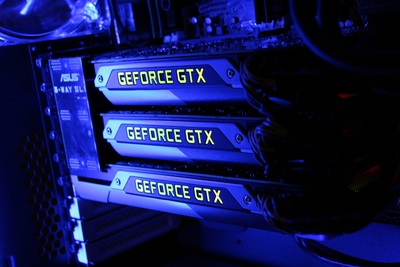 Overall, we are very excited for the Geforce GTX Titan. You can get amazing performance without having to deal with SLI, but if you need insane performance you can go with SLI or Triple SLI and simply blow any other video card out of the water. For the performance, the power draw is pretty modest, and it doesn't require much more cooling than the GTX 680. If you have the budget, this is an excellent card that we would recommend to anyone looking for a high-end gaming computer.

These photos are not of the system we used in our testing, but since we had them we thought we would include them for your viewing (and drooling) pleasure. This system is a dual Xeon, Triple SLI Titan system built in the new Fractal Define XL R2 chassis: