Always look at the date when you read a hardware article. Some of the content in this article is most likely out of date, as it was written on April 8, 2013. For newer information, see our more recent articles.

Since the V552i and V752i laptops feature Nvidia Optimus technology, they will switch between using the Intel graphics found on the CPU and the NVIDIA graphics card depending on the amount of graphical power needed. This feature extends battery life in light load situations by switching the power-hungry NVIDIA GPU into a low power mode when it is not needed and using the more power efficient Intel graphics instead. This is great way to help you get the most out of your laptop, but it makes measuring the battery life a bit more difficult since we will need to run the units at various levels of graphical load to test the battery life with both the Intel and NVIDIA graphics.

To accomplish this, we first simulated a light workload with the screen operating at 75% brightness. This will cover very light tasks such as web browsing or word processing which utilize the Intel graphics. Next, we looped a 1080p video to see how long the battery lasts when watching movies. The Intel graphics has plenty of power for video playback, so this test also uses the Intel graphics. Finally, we ran Unigine Heaven with the settings optimized for the unit to find the battery life while gaming. For this test, the V525i and V752i will switch to the NVIDIA graphics, so we expect the battery life to take a pretty big hit due to the higher power draw of the NVIDIA GPU. 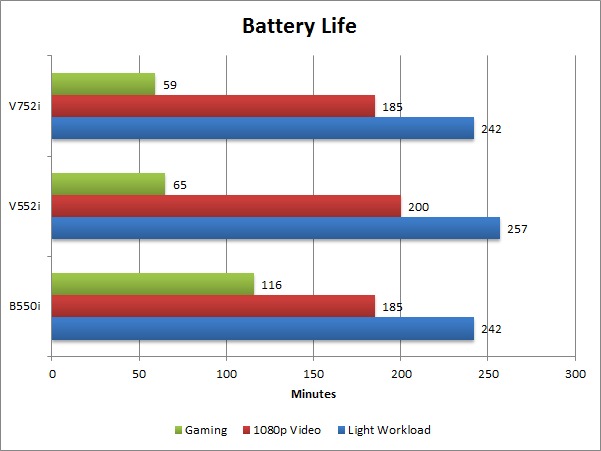 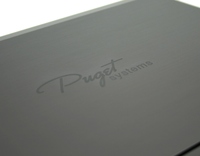 All three of these units easily passed our testing process, so we are excited to update our Traverse line of laptops to the V552i and the V752i as well as adding the B550i. The performance of these new V-series laptops is quite a bit better than the models they are replacing, although they are slightly more expensive. If powerful graphics are not needed, the B550i is a great way to get great performance at a great price as it removes the NVIDIA graphics entirely and instead uses the graphics built into the CPU.

In addition to the more powerful graphics on the V525i and V752i, all three of these laptops have a huge increase in battery life in light to medium load situations compared to previous generations. Four hours of battery life is very good for this size and speed of laptops, and much better than the current laptops we are offering. The battery life when gaming is still not great at roughly an hour for the V552i and V752i, but that is to be expected as they use the fairly powerful NVIDIA GT 660M. Overall, we feel that these laptops will be great for our customers. The V552i and V752i are a great option for those that want good battery life combined with decent graphical capability, while the B550i is great for those on a tighter budget.

Whenever we are qualifying new products, we first and foremost want to meet our customer's needs. To aid in future qualifications, we would like to present you, the reader, with a question: what do you look for in a laptop? Low cost, great battery life, cutting-edge performance, high resolution screens, or something else? Let us know in the comments below.