Always look at the date when you read a hardware article. Some of the content in this article is most likely out of date, as it was written on August 9, 2011. For newer information, see our more recent articles.

Cooling performance aside, there are a few physical challenges to vertical cooling. 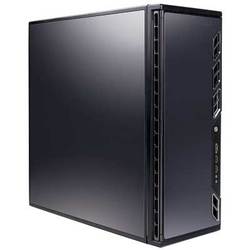 In terms of performance, we were surprised by the results. Convection should (in theory) aid in cooling with a system running in a vertical orientation.  However, our measurements do not support that theory. The Antec P183 V3 showed our only large variance in cooling, but with the horizontal orientation running cooler. So what is causing these results?

Our conclusion is that the forces of convection in a computer are simply not strong enough to overcome even the turbulence and airflow eddies caused by the fans. The lack of any temperature variances when we tested with the air-cooler supports this theory, as air-coolers contribute more airflow and turbulence to the core of the system than a closed-loop liquid cooler (which only has a fan at the edge of the system). The fact that the Coolit ECO II in the Antec P183 V3 was running hotter in the vertical orientation does suggest that the hotter air in a system tends to congregate in the top of a system, but it appears that this is only the case when the air is relatively stagnant (no fans in the area). We believe that this result did not replicate in the Silverstone FT02B-W simply because the airflow in that case is so unrestricted that there is not this pocket of stagnant air for the radiator to sit in. Similarly, when the Antec P183 V3 is in the horizontal orientation, the top case fan provides enough airflow to vent the hot air out of the system before enough hot air can congregate and cause a rise in temperatures.

Our very own company President Jon Bach was so intrigued by these results that he dusted off his college textbooks to try to come up with a mathematical reason for our results. This is his take on the physics involved:

Let's do a thought experiment to see what we would expect in terms of the bouyancy of hot air inside a chassis, and how that relates to the air pushed by a typical 120mm fan. We'll use an average room temperature of 20C (68F).  In our thermal testing, under load with maximum temperatures, we saw chassis panels around 40C average.  Let's round it up to 50C so we're sure to give convection the biggest advantage possible.  Heck, let's double the average air temperature difference measured, and use 60C.

That's about half the pressure put out by our Antec TriCool fans on their lowest setting.  That means that even one of the lowest pressure, quietest fans that we sell, would *double* the pressure necessary to overcome the air pressure caused by convection, in the hottest scenario we can imagine.  And this was after doubling the average air temperature increases we actually measured.  When using a 40C average air temperature, an Antec TriCool fan on low setting has 4x the pressure necessary to overcome convection.  Given the results of this thought experiment, the results of our emperical testing are making a lot more sense.  Convection, while a strong concept in thought, simply does not generate the results necessary to play a discernible role in a typical chassis. 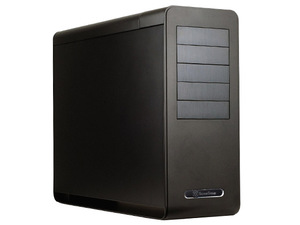 What our testing has shown is that the Silverstone FT02B-W has great cooling, but it is not due to the case being able to work with the forces of convection.  Instead, the benefit is due to the fact that the internal layout adds very little resistance between the intake and exhaust fans. In traditional cases, the front intake has to go past the hard drive mounts (and any drives installed in those mounts) before it reaches the motherboard and other hot components. While the distance is not huge, the extra 5-7 inches and blockage by any drives is enough to cause a drop in the amount of directed airflow the intake fans can provide. In the Silverstone FT02B-W, the intake is at the bottom of the case rather than the front, which allows the front intake to completely bypass the hard drive mounts (turning the 5-7 inches into only 1-2 inches). By having the intake fans at the bottom, it also allows for the use of multiple large fans (in this case 180mm fans). Normally there are power buttons, LEDS, brackets and many other things around the front intake that the fans have to work around. By moving the intake away from these obstacles, you can have a very large rectangular area in which to mount fans almost as large as the case is wide.

In conclusion, vertical oriented cases can cool very well, but don't expect a case with an vertical airflow to automatically have superior cooling to a traditional case. You need to take into consideration how restricted the airflow is and the size/location of the fans. In the Silverstone FT02B-W, moving to a vertical orientation allowed for Silverstone to use larger fans and achieve a much shorter run from the intake to the hot components resulting in a very well-cooling case, but not all case manufactures will spend the time to ensure this same level of cooling. According to our testing, the internal layout of a case is still the most important factor to case cooling and not the orientation of the airflow.