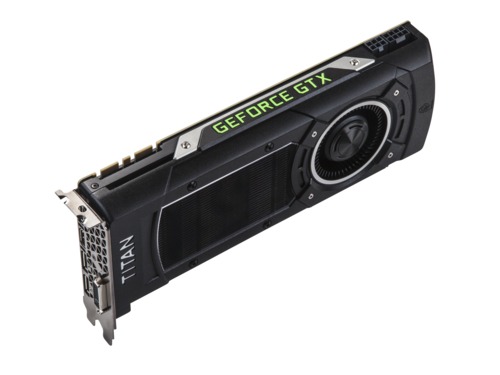 NVIDIA'S GeForce GTX Titan X is the top-end of the Maxwell based graphics card line, effectively the 'big brother' to the already powerful GTX 980. That makes the Titan X the fastest card available in its generation for gaming, and also a powerhouse for single-precision (FP32) GPU calculation workloads.

It shares the same technology as the rest of the GTX 900-series line, which is all based on the Maxwell graphics architecture, and has a massive 12GB of dedicated video memory - three times what the GTX 980 sports, and twice what the previous Titan and Titan Black offered. It has 50% more processing resources than the 980 as well, though it runs at slightly lower clock speeds. Overall that gives it a 30-40% lead over the 980 in terms of performance, without considering the added capabilities provided by the larger amount of memory. This SuperClocked version boosts that even further, as it comes overclocked from the manufacturer (EVGA).

William George (Product Development) Says:
This is the first single GPU video card I am comfortable recommending for gaming at 4K resolution. The 12GB of memory in particular will help greatly here, especially as newer games come out that need more video RAM, and the GPU itself can average >30 fps in all 4K game tests I have seen. The 'Achilles heel' of this card, though, is double-precision (FP64) compute performance. That won't matter to gamers or most folks using this for traditional graphics workloads, but in certain areas of GPGPU computing it comes into play. If you know your work depends on that, then aim for the high-end Tesla or Quadro line of cards instead.

Jeff Stubbers (Technology Consultant Lead) Says:
This card offers a lot of gaming performance and is definitely worth considering if you are looking to game on a 4K monitor above 30 Frames Per Second at 3840x2160 resolution.
Model: EVGA 12G-P4-2992-KR