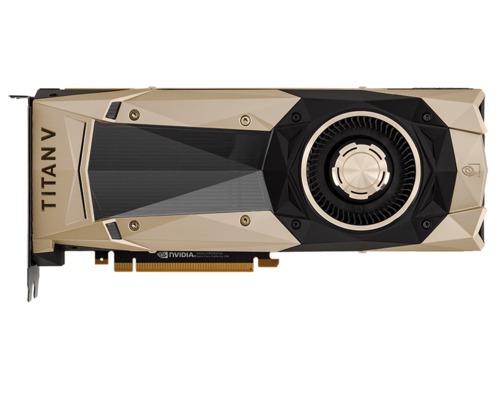 The Titan V is the first video card using NVIDIA's new Volta architecture. Volta debuted on the Tesla V100, but that accelerator does not have video outputs and is only available for specialized servers. Titan V has the same GPU (codenamed GV100) and brings it to a desktop / workstation graphics card.

Because of that lineage, the Titan V is the first time that certain features and specifications have been available outside the Quadro and Tesla series. In particular, it has fast HBM2 memory - along with Tensor Cores, which are a part of the Volta architecture. It also uses a smaller manufacturing process than previous generations from NVIDIA, allowing them to pack more CUDA cores in as well. And finally, it has unrestricted double-precision (FP64) performance for fast and accurate calculations when high precision is required. That was actually a feature of the first generation of Titan cards as well, but had not been included on the Maxwell or Pascal based Titans.

Beyond the new internal specs, the Titan V comes equipped with a very nice cooling system and four video outputs (one HDMI and three DisplayPorts). It supports CUDA, DX12, and NVIDIA's 3D Vision technology - but it does not have SLI. Multiple cards can be used independently, for GPGPU calculations, but it cannot be paired up to boost gaming performance. The Titan V isn't really designed for gaming anyway, with a focus instead on professional graphics and machine learning.

William George (Product Development) Says:
With how expensive the Titan V is I do not recommend it for gaming, even though it was technically the fastest single graphics card in the world as of its launch in December 2017. It performs very well in things like 3D rendering (for programs that support the Volta architecture, at least) so there it could make sense for some users, even with the high price tag. It should also work well in some machine learning and artificial intelligence workloads, though the benefit of the new Tensor Cores that NVIDIA added seems to be pretty niche.

Dr Donald Kinghorn (Scientific Computing Advisor ) Says:
The Titan V is a great card and is essentially a Tesla V100 in a desktop friendly form. The standout features of the V100 like it's very good fp64 double precision, full fp16 functionality and Tensorcores are available on the Titan V. However, for most Machine Learning and HPC workloads that just utilize fp32 performance will only be 10-20% better than the Titan Xp. I recommend this card for developers that want try working with fp16 and Tensorcores or anyone that can make use of the great double precision performance.
Model: NVIDIA TITAN V