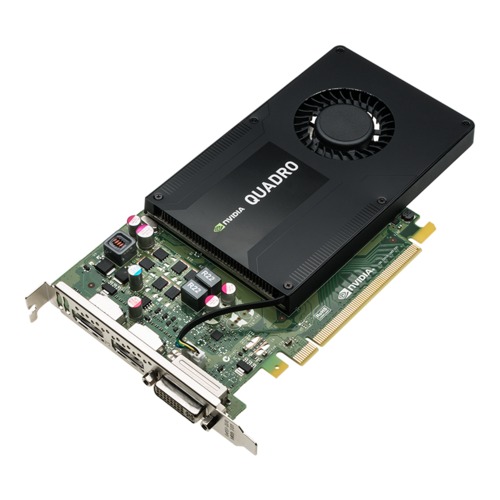 The NVIDIA Quadro K2200 is a mid-range, Maxwell-based professional graphics card - one of the first Quadro cards to switch to that new GPU architecture. It has double the video memory of its predecessor, the K2000, with 4GB of graphics memory on a 128-bit bus. Its processing power is also increased substantially, with 640 stream processors.

In addition to solid performance for professional 3D applications, the Quadro K2200 also supports more monitors than previous generations. It can run up to three screens at the same time, thanks to a dual-link DVI port and a pair of DisplayPort outputs. A wide range of standards are also supported by this card: DirectX 11, OpenGL 4.4, CUDA 5.0, and OpenCL (to name a few).

William George (Product Development) Says:
This is a great mid-range Quadro card, which is ideal for applications which need a "professional grade" video card but don't require cutting-edge 3D performance. It also supports 10-bit color, so it is a great choice for Photoshop users with high-end, 10-bit capable monitors. If you don't fall into one of those categories, though, a GeForce card around the same price will give more raw 3D performance in most situations.

Jeff Stubbers (Technology Consultant Lead) Says:
This is a great choice if you are looking for a mid-range 30-bit graphics card for most accurate colors when pairing with a 10-bit monitor. This card can support up to 3840x2160 resolution with its DisplayPort outputs.
Model: PNY VCQK2200-PB

The NVIDIA Quadro K2200 delivers exceptional power-efficient 3D application performance. 4GB of GDDR5 GPU memory with fast bandwidth enables you to create large, complex models, and a flexible single-slot form factor makes it compatible with even the most space and power-constrained chassis. Plus, an all-new display engine drives up to four displays with DisplayPort 1.2 support for ultra-high resolutions up to 3840 x 2160 at 60 Hz with 30-bit color.

Designed and built specifically for professional workstations, NVIDIA Quadro GPUs power more than 200 professional applications across a broad range of industries including manufacturing, media and entertainment, sciences, and energy. Professionals trust them to realize their most ambitious visions- whether its product design, visualization and simulation, or spectacular visual storytelling-and get results to market faster.