Note from the author: The description of the normal versus "extreme" variants of these chipsets in our original version of this article was incorrect, due to a misunderstanding on our part of how they are put together. It did not affect our breakdown of their features, and the content has now been corrected. We apologize for any confusion this may have caused!

In recent years, AMD has offered three tiers of chipsets for their mainstream Ryzen processors targeting different price points and users. The latest 600 series differs from that a bit, and spreads the availability of various chipsets over a wider range of time. Naming is similar to previous generations, with X670 being the top-end – but this time it comes in both normal and "extreme" variants. Likewise, B650 is the mid-range option – and again, it comes in normal and extreme versions – with availability lagging a month or two behind the X670. Presumably an entry-level A620 (or similar) will come later on, but for now the focus is on the four total variants of these two chipsets.

But what is a chipset, you might ask? For those who are new to this term, it refers to the chip or group of chips on a motherboard that facilitates communication between the processor (CPU), memory (RAM), video card (GPU), expansion cards, storage (SSDs / HDDs), other onboard controllers (audio / networking), and peripherals (USB and Thunderbolt devices, for example). Different chipsets are built to support different generations of CPUs, and provide varying amounts of PCI-Express lanes, SATA ports, USB ports, etc.

Most users won't need to concern themselves with the details of what these chipsets offer, since what really matters in the end is the functionality that the motherboard as a whole provides, but for those who enjoy digging into details we've put together this comparison.

What do all of these chipsets have in common?

Before getting into what makes these chipsets different, lets briefly cover the similarities they share. These are all designed for AMD's new socket, AM5, which in turn is built to support AMD's Ryzen 7000 Series processors. It is also worth noting that this is the first time AMD has used a LGA style socket for their mainstream CPUs, and that this generation also transitions over completely to DDR5 memory (with no DDR4 options). In the past AMD has been very good amount maintaining a single socket for multiple CPU generations, so it is entirely possible that this socket – and maybe even these chipsets – will support future Ryzen models as well.

Each chipset in this family also facilitates use of the PCI-Express lanes, graphics, and other features which are built into Ryzen processors, though not always at the same speed. AMD provided a chart which we show further down to help visualize the differences. 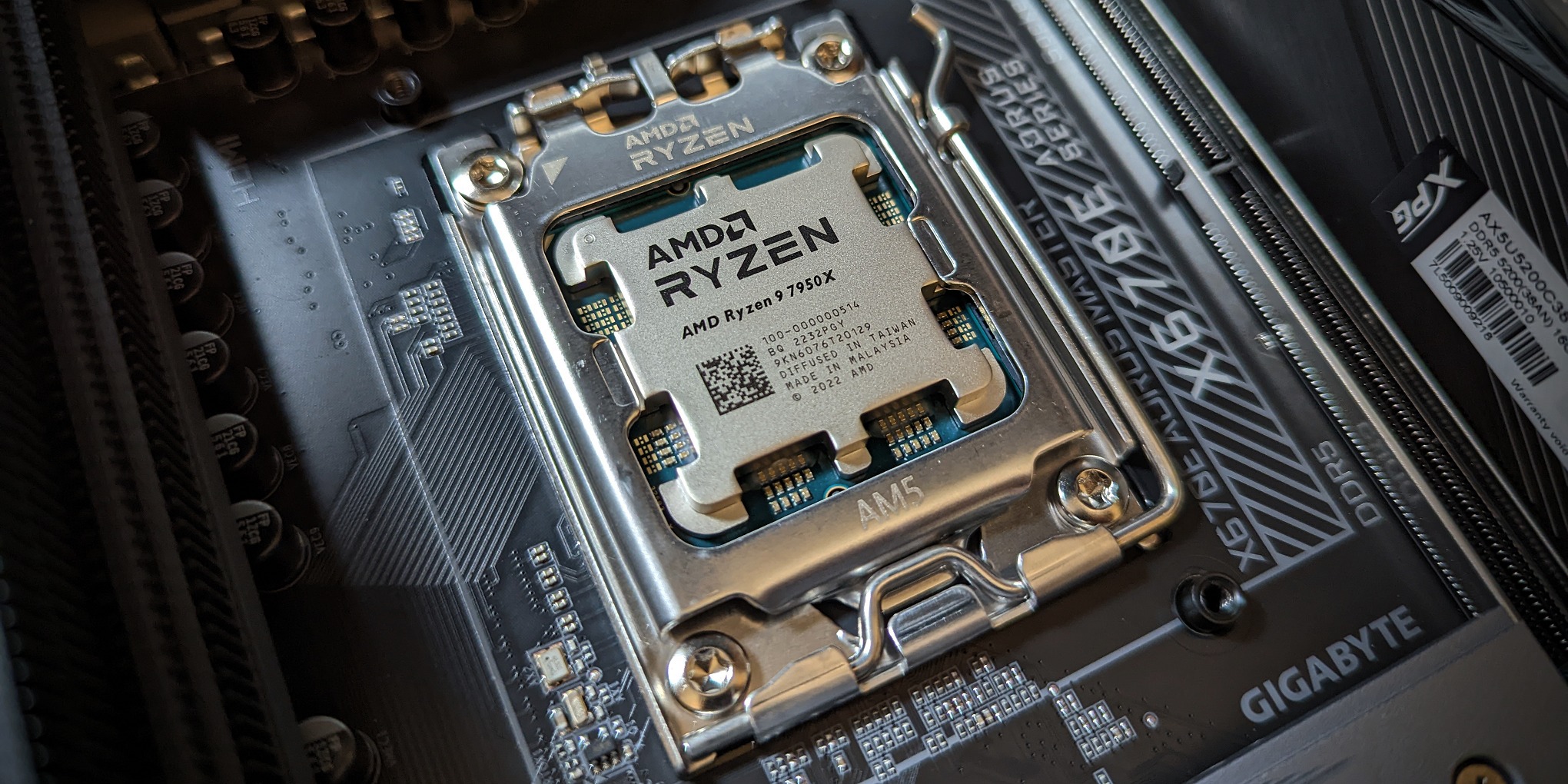 Historically, chipsets starting with X in the model number have been AMD's enthusiast product – and the same is true this time around. X670 provides up to 44 total PCI-Express lanes (including those coming from the Ryzen 7000 series CPU) for motherboard manufacturers to utilize. Four of those are PCIe 5.0, to enable use of upcoming NVMe SSDs which can operate at those high speeds. Additionally, it supports up to twelve USB 10Gbps ports, two USB 20Gbps ports, and eight SATA ports.

B650 is a more mid-range product, with support for 36 PCIe lanes and exactly half the number of USB and SATA ports that X670 has. It is worth noting that, by default, none of the lanes from this chipset support the PCIe 5.0 spec.

What Are the Extreme Versions?

In addition to the two chipset variants described above, AMD is offering each of these in an "extreme" version as well. Sometimes you will see this name shortened from X670 Extreme to just X670E (and likewise B650E). However, these are not really all that different: the only major specification which changes on the Extreme version is how many of the PCI-Express lanes are able to operate at PCIe 5.0 speed instead of 4.0. More precisely, the sixteen PCIe lanes from the Ryzen 7000 processor – which can be set up as a single x16 slot or a pair of x8 slots, depending on the board layout – get this speed bump. In the case of B650 Extreme, four additional PCI-Express lanes from the processor are boosted from PCIe 4.0 to 5.0 to enable use of a faster NVMe SSD.

Here is a chart from AMD comparing the key features like PCI-Express, USB, and SATA ports between these different chipsets: 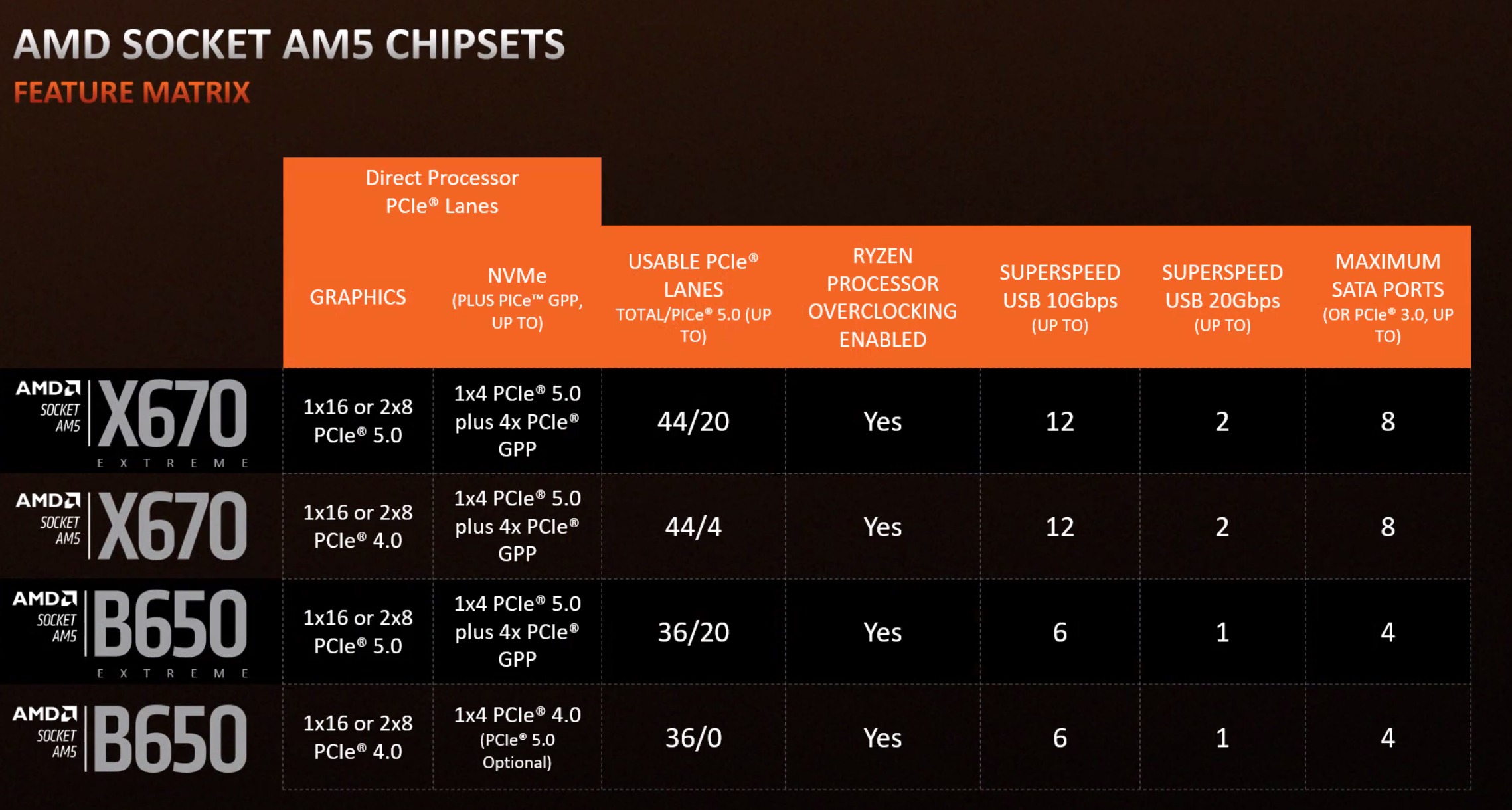 AMD also has a page on their website with this specification breakdown and their own synopsis of each chipset.

AMD has done a good job segmenting these four chipsets, with clear benefits to each. You can probably draw your own conclusions from the information we've presented so far, but if you want my analysis of who the different chipsets are appropriate for – here you go:

X670 Extreme – This top-end option is for users who want support for future PCI-Express 5.0 capable graphics cards. This chipset is likely to be found on all of the top-end motherboards tailored for PC enthusiasts and workstation users.

X670 – If you don't need a full compliment of PCIe 5.0 lanes, but still want a lot of fast USB ports and SATA drive connections, the normal X670 should do the trick. It does still support one fast, NVMe Gen 5 SSD as well.

B650 Extreme – This is a bit of a paradox, being an "extreme" version of a more mid-range chipset, but it might be popular with enthusiast-focused boards that are limited on space or price. It gets the same level of PCIe 5.0 support that X670 Extreme has, just with a reduced number of PCIe 4.0 lanes and USB / SATA ports.

B650 – For the time being this will be the most affordable chipset option supporting Ryzen 7000, but even if a lower model comes out I suspect this will be a popular choice for compact micro ATX and ITX motherboards. It is perfect for those who want the latest AMD CPUs and DDR5 memory, but who aren't concerned about support for bleeding-edge PCIe 5.0 devices.

Please also remember that this is simply a comparison of these chipsets, and a motherboard is made up of more than just the chipset. Additional controllers will likely be present to provide things audio, networking, and potentially even more USB ports. Other factors like the VRM design and quality will impact overclocking capability. The board size and slot layout will impact whether dual video cards are feasible. Manufacturing quality affects long-term reliability. And more! So when pondering the chipset for a new PC, keep in mind that in the end you will be picking a motherboard – not just a chipset – and that there are more things to consider when making that selection.