Since these laptops feature Nvidia Optimus technology, they will switch between using the Intel graphics found on the CPU and the Nvidia graphics card depending on the amount of graphical power needed. This feature is intended to extend battery life in light load situations by switching the power-hungry Nvidia GPU to low power mode when it is not needed, and using the more power efficient Intel graphics instead. This does, however, make measuring the battery life a bit more difficult since we will need to run the units at various levels of graphical load to test the battery life with both the Intel and Nvidia graphics.

To accomplish this, we first simulated a light workload with the screen operating at 75% brightness. This will cover very light tasks such as instant messaging or word processing which utilize the Intel graphics. Next, we looped a 1080p video to see how long the battery lasts when watching movies. The Intel graphics has plenty of power for video playback, so this test also uses the Intel graphics. Finally, we ran Unigine Heaven with the settings optimized for the unit to find the battery life while gaming. For this test, the units will switch to the Nvidia graphics, so we expect the battery life to take a pretty big hit due to the higher power draw of the Nvidia GPU. 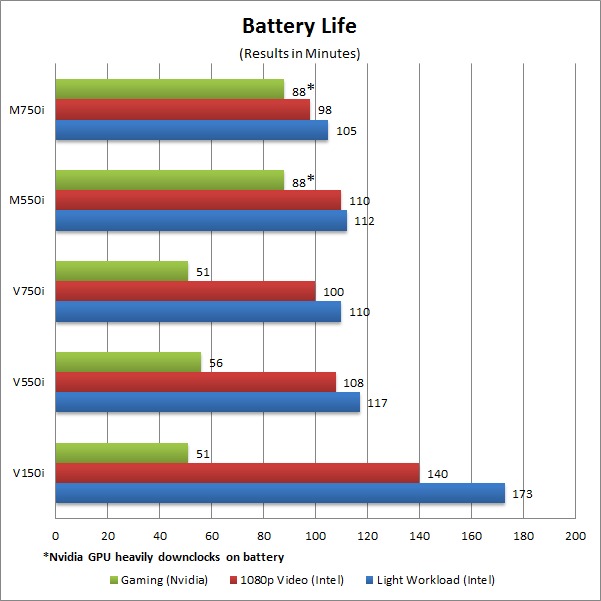 Once again, we want to stress that our battery life measurements are taken in very real-world situations so they cannot be directly compared to battery life expectancies published by various manufactures. In our opinion, these real-world tests are much more useful!

Most of our results are nice and straight-forward, but for the gaming battery life, our results are muddied by the fact that the discrete Nvidia GPU found on the M-series laptops does not run at full speed when the unit is not plugged in. This is not a flaw with the units, but is caused by the simple fact that the GPU draws so much power that current battery technology can not accommodate the power draw without being too big and bulky. For this reason, the battery life appears to be very good at about an hour and a half, but the performance will not be acceptable for the majority of modern 3D games. The GPU core clock alone dropped from 595MHz to only 74Mhz, dropping our frame rate of 40FPS when plugged in down to only 8FPS when on battery. What to take from this information is that if you are considering gaming on one of these units while on battery, the V-series is much better than the M-series even though the M-series normally has more graphical power.

From our results, you can see that the larger screens consume more power, resulting in lower battery life. Although the results were within only a handful of minutes of each other, the 15 inch units both had better battery life than their 17 inch counterparts. The V150i had the overall best battery life at a light workload and when playing a movie, but was actually the worst when it came to gaming. This is likely due to the fact that the V150i has more GPU RAM (although the RAM is also slower than the other models) which consumes more power when the Nvidia graphics is utilized.

At the 15" and 17" screen sizes, the V-series had slightly better battery life than the M-series with the exception of the skewed gaming results. These results were within a few minutes of each other, so from a battery life standpoint the two 15 inch and the two 17 inch units can really be thought of as having roughly equal battery life.