For reasons unknown, green LED fans are much rarer than their blue and red counterparts. In fact, the only brands with reliable supply that we could find were Cooler Master, Apevia, Gelid, Logisys, SilenX, and CoolMax. Of those brands, we have had previous poor experiences with Logisys, SilenX and CoolMax fans so we skipped those for our first round of testing. The Gelid fan was also skipped as it doesn't have actually have green LED's, but rather white LEDs shining onto transparent green fan blades.

This leaves us with two potential brands for our green LED fan kits; Cooler Master and Apevia. While looking though the specs of the Apevia fan however, we noticed that the startup voltage is 9v DC. We are very active in undervolting fans to reduce noise levels and very commonly run fans at 5 or 7 volts, so a startup voltage of 9v is not acceptable for use in our systems. And with that, we were left with a single fan that met all of our initial requirements: the Cooler Master SickleFlow 120mm Green LED Case Fan.


In order to pass our qualification, a fan must acceptably meet three requirements: consistent supply, airflow and noise. In the case of lighted fans, the brightness and color of the LEDs also must meet our standards. We have already considered the supply portion of our qualification, so the next thing we want to test is the airflow of this fan.

To measure the airflow, we used an anemometer (Extech AN100) with a custom adapter to adapt from 120mm fan to the smaller 80mm diameter of the anemometer sensor. The adapter is 200mm long, giving us a smooth, gradual slope from the 120mm side to the 80mm side. Using this type of adapter means that our CFM readings will be lower than the manufacturer's specifications which are taken in an open-air environment, but should do a good job at giving us comparison readings. It will also be more real-world since a fan installed into a chassis is never going to perform at the manufacture rated open-air CFM levels.

As a comparison, we also included the measurements of a Scythe Slip Stream 800RPM fan (used in our quiet fan kits), the Antec TriCool (used in our adjustable speed fan kits), and the Antec TwoCool (found in many of Antec's latest chassis). 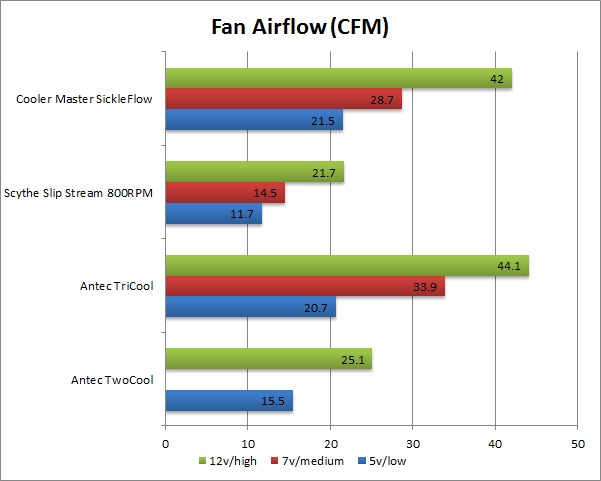 As you can see, the Cooler Master SickleFlow fan is very similar to the Antec TriCool. The airflow at 5v is slightly higher, but more airflow is always better as long as noise does not become a concern. The airflow drops off significantly at 7 and 12v, but we've always felt that the jump between low and medium on the Antec TriCool is a bit larger than it should be, so this actually works out well for our purposes. This means that for the airflow portion of our qualification, this fan meets our requirements perfectly.

For noise measurements, our dBa meter was placed at a distance of two inches at a 90 degree angle from the side of the fan. This is much closer than dBa readings are normally taken at, but we expect the difference between some of our configurations to be very small so we would rather have slightly exaggerated results. Because of this, our measurements will be in no way comparable to the manufacturer's specifications of noise.

We will use the same set of fans as our airflow test and again run them at 5, 7, and 12 volts. The ambient noise level for our testing is 27.5 dBa. 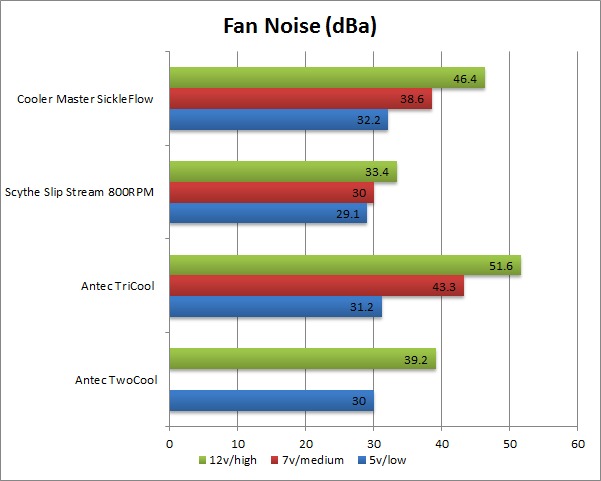 At 5v, the Cooler Master fan is a bit louder than the Antec TriCool, but the noise level increase is about what we expected considering the increased airflow we found in the previous section. The noise levels at 7 and 12v are exactly where we want them to be, and lines up perfectly with the results we saw in the airflow tests.

While the 1dBa increase in noise level at 5v isn't ideal, you need to keep in mind that these measurements were taken at only 2 inches away from the fan. At any reasonable distance, that tiny difference will be almost imperceptible. These readings are well within what we were looking for, so this fan also passes the noise portion of our qualification.

For the LED brightness, we ran into a bit of an issue. With the Antec TriCool LED fans, the fan is always supplied with 12v of power, and the fan speed is controlled with a 3-way switch (hence the name TriCool). The Cooler Master fan has no such switch, so in order to slow down the fan it must undervolt it to 5 or 7 volts. This has the added effect of lowering the voltage supplied to the LED's, so how the LED's handle the reduced voltage is of major concern to us.

LED brightness is very difficult to convey in pictures, but we will do our best to give as accurate a representation as possible.

The first thing we noticed is that this fan doesn't have as much of a glow as the Antec TriCool, which is able to provide a small amount of ambient green light to the interior of the chassis. The LED's on the Cooler Master fan are pretty much only for lighting up the fan itself, so this fan should not be expected to provide any additional illumination inside the chassis. Granted, the amount of ambient light given off by the Antec TriCool is very small, but it is enough for us to take into consideration.

Another thing we noticed is that the LED's are much brighter on the intake side of the fan. But since that is the side normally visible though the front or side of a chassis, this is not too much of a problem. The only time this might be an issue is when this fan is used as a top exhaust. In that configuration, the fan will not appear nearly as bright as it would in either the front or side of a chassis.

The difference between 12v and 5v was not as large as we feared, but it is certainly noticeable when compared side-by-side.

One very positive thing we can say is that between the three fans we got in for qualification, there was absolutely no color variation. With the Antec TriCools, we would sometimes receive a batch of fans that was a slightly different shade from the previous batch which forced us to take the time and effort to sort the fans according to the shade of the LED's. While three fans is not a huge sample size, it is certainly encouraging to see all three fans with identical color LEDs.

While we still have a few reservations about the brightness of the LEDs when the fan is undervolted, that issue will be present on any fan that does not have a way to control the fan speed beyond lowering the source voltage. The noise and airflow of this fan is closer to the Antec TriCool than we expected to find, so at the moment this fan is the best replacement available.

While Cooler Master does make red and blue variations of this fan, we will continue to use the Antec TriCool for the red and blue versions of our colored case fan kits. If Antec ever discontinues either of those fans, however, we will have no reservations about moving those kits to Cooler Master SickleFlow fans as well. At the moment the fact that the LEDs on the Antec fans do not change brightness depending on the speed of the fan is too great of an feature to pass up so we will continue using those fans as long as possible.