Always look at the date when you read a hardware article. Some of the content in this article is most likely out of date, as it was written on June 6, 2014. For newer information, see our more recent articles.

Some of the Star Citizen developers have stated that the game is largely CPU limited at this point. To test that theory, we ran through benchmarks with various settings on the Core i7 processor in our test rig. It is a six-core CPU, so we ran it with all cores on, then four, and then just two. That should simulate other Core i7 and even Core i3 processors. We also ran tests at those different core counts with Hyperthreading turned off, to see if that Intel feature had any impact on performance. Here is what we found: 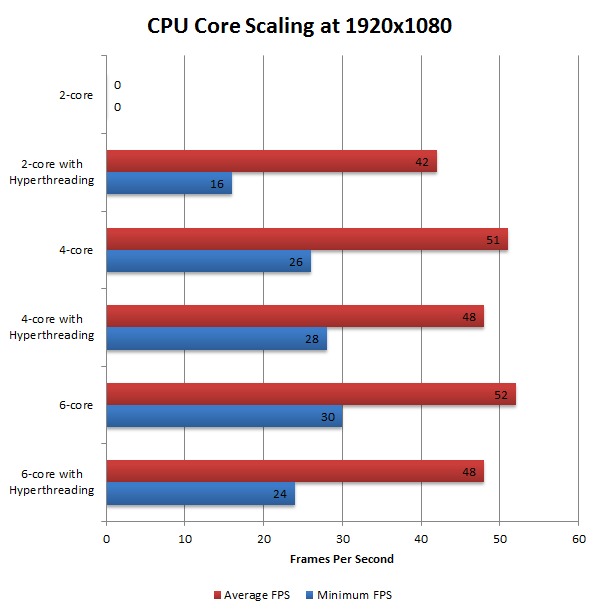 I should start by explaining the 2-core score. With just two cores enabled and Hyperthreading turned off, the game would consistenly freeze part-way into loading the Star Citizen hangar (where you select a ship to play Arena Commander with). Sometimes the game would pause for a few seconds at that point with any set of hardware, as graphics and such were loading into view, but here it would always hang and then crash as soon as I tried to alt-tab out to see what was going on. This makes me wonder if some part of the game is just expecting to see more than two cores as being available.

With Hyperthreading enabled, the 2-core configuration would show up to Windows as actually being 4 cores... and at that point the game was playable, though with noticeably lower performance. Once I reached 4 cores, either with or without Hyperthreading enabled, performance pretty much leveled out. You see some differences above, but they are all reasonably close together. The only thing I might be able to pull out of this is that average frame rates were higher with Hyperthreading disabled, both at 4- and 6-core settings. I have seen similar results in some other games as well, and this is one of the reasons I often recommend a Core i5 (quad-core without Hyperthreading) for gamers, rather than the Core i7 (which adds Hyperthreading).