Written on June 2, 2013 by Matt Bach
Share:
Always look at the date when you read a hardware article. Some of the content in this article is most likely out of date, as it was written on June 2, 2013. For newer information, see our more recent articles.
Table of Contents 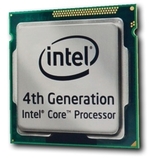 Haswell is the code name for Intel's 4th generation of processors and is the "tock" in Intel's "tick-tock" development cycle. This means it uses the same 22nm manufacturing process as the previous generation Ivy Bridge processors, but includes many refinements to the chip's architecture. Part of this is the new 1150 socket, which means that Haswell is not backwards compatible with Ivy Bridge CPUs or motherboards. However, Intel has kept the same heatsink mounting as socket 1155/1156, so all of the heatsinks for Ivy Bridge are physically compatible with Haswell.

As it often happens when there is a new socket, there are a few minor issues with Haswell that have circulated around the web prior to launch. The first is reports of problems with Haswell systems coming out of sleep when a device is plugged into a USB 3.0 port. Specifically, the some USB drives will briefly disconnect then reconnect when the system wakes up from standby. So if you have a file open from the USB drive and go into sleep, you may have to reopen that file when you come out of sleep. The good news is that this only happens on some USB 3.0 drives and Intel has already resolved this issue in a new chipset stepping which will be available in July. So if you are concerned about this minor issue, you can simply wait to purchase a Haswell motherboard until after July of 2013. Realistically, however, it is very unlikely that the vast majority of users will ever see this issue.

The second issue is a bit of an odd one and appears to have caught Intel somewhat by surprise. Haswell CPUs have such good power management that when idling, some power supplies are not able to provide such little voltage stably. The result is that the system will randomly shut down or reboot when idling because the power supply's over/under-voltage protection kicks in. This should only happen with older or lower quality power supplies and many manufactures like SeaSonic, Corsair, OCZ, and Enermax have released lists of power supplies they have confirmed to be compatible with Haswell. While we at Puget Systems use some power supplies that are not on these lists, we have already sent samples to Intel and received confirmation straight from the source that our power supplies have no problems with Haswell.

Along with the Haswell CPUs, Intel is also releasing the new 8-series chipsets. The major improvement for these chipsets is the move toward more SATA 6Gb/s ports - on the upper end chipsets, all six of the SATA ports are now SATA 6Gb/s ports. This is a great improvement as the price of high speed SSD drives - which require SATA 6Gb/s for optimal performance - continues to drop making them more and more accessible to the average user.

At launch, the following desktop CPUs, including the lowe power models, will be available. Note that there are no desktop i3 Haswell CPUs available at launch:


The standard desktop CPUs have stock frequencies ranging from 3.0GHz to 3.5GHz with Turbo frequencies ranging from 3.2GHz to 3.9GHz. Hyperthreading is only supported on the i7 models, and for those that use vPro (hardware-based remote access), it's worth noting that only the i7-4770, i5-4670, and i5-4570 include vPro support. All of the CPUs have Intel HD 4600 graphics, but the graphics processor operate at speeds ranging from 1100MHz to 1250Mhz depending on the CPU.

On the low power models, the stock frequencies range from a very low 2.0GHz to a respectable 3.1GHz with Turbo frequencies ranging from 3.0GHz to 3.9GHz. The i7 CPUs are the only low power CPUs that support Hyperthreading, but almost all of the low power models support vPro with the exception of the i5-4430S. The thermal output ranges from 35W to 65W with the lower frequency models running at the lower 35W.

Below is a quick breakdown of some of the major features of Haswell versus the previous generation (Ivy Bridge) with the differences in red:


Between Haswell and Ivy Bridge, there are three main differences in terms of features. First, Haswell actually has a higher TDP than Ivy Bridge which is due to the fact that Intel has moved the CPU's voltage regulation onto the CPU itself rather than having it on the motherboard. While this at first may seem like a detriment, this is actually a good thing as it allows the CPU itself to control its own voltage - which improves both idle power draw and theoretically the CPU's ability to overclock. This results in better overall system efficiency and allows for more aggressive throttling, but will cause higher CPU temperatures. Because of this, using a good CPU cooler is even more important now to deal with the additional heat coming from the CPU.

The improved graphics is a major feature of these new CPUs and should result in an average of 10-12% performance improvement in 3D applications over Ivy Bridge. This makes Haswell CPUs more desirable for use in desktops or workstations where only moderate graphical power is required as it removes the need to use a discrete video card. One thing to note is that (motherboard permitting) Haswell can power up to three displays at once, just like Ivy Bridge.

Finally, the new socket doesn't mean much in terms of performance, but it does mean that anyone looking to upgrade their current system to Haswell will need not only a new CPU but a new motherboard and potentially power supply as well.

Recent Intel CPUs (including Haswell) have been designed with the intent of moving more and more functionality from the motherboard onto the CPU itself. For example, onboard graphics, control of the RAM, PCI-E graphics lanes and, with Haswell, even the CPU voltage regulator is no longer located on the CPU rather than the motherboard. What this means is that things like onboard video performance and RAM compatibility are now determined by the CPU rather than the chipset. Because of this, the differences between chipset are now more about feature sets rather than what RAM is compatible or the number of PCI-E lanes available.

Note that things like wireless, LAN ports, display outputs and audio ports are specific to each motherboard rather than chipset. So even though two boards use the same chipset, they may have vastly different onboard ports and headers.

Like previous generations, the Z-series chipset is the most feature rich option including the most support for discrete graphics (including triple GPU setups) and CPU overclocking. Z87 is also the only chipset to support Lake Tiny which is a set of enhancements for Intel's RST (Rapid Storage Technology) driver which should improve SSD performance and power draw when using SSD Caching (Smart Response Technology).

H81 is much different than either Z87 or H87 as it lacks many of the features found in the other chipsets. In addition, it only supports a single discrete GPU, has fewer USB 3.0 ports, only 2 SATA 6Gb/s ports and can utilize only half the amount of memory as the other chipsets. H81 is a great option for small form factor systems where you rarely have more than one discrete graphics card and a couple of SATA drives, but for larger desktops we would recommend using either Z87 or H87.

If you want a more in depth comparison between these chipsets, we recommend reading the Consumer Chipset portion of our "Z87, H87, H81, Q87, Q85, B85 - What is the difference?" article.

Overall, the differences between the business chipsets are very minor. The biggest thing to note is that the Q87 chipset is the only one that supports Intel vPro. Other than that, all of the chipsets are almost identical aside from minor port variations.

If you want a more in depth comparison between these chipsets, we recommend reading the Business Chipset portion of our "Z87, H87, H81, Q87, Q85, B85 - What is the difference?" article.

In summary, there are five main points where Haswell differs from the previous generation Ivy Bridge:

What this means is that for most users, upgrading from Ivy Bridge (or possibly even Sandy Bridge) is likely not necessary. Of course if you want to have the latest and greatest technology there is nothing stopping you from doing so, but you will likely not see much of a performance improvement. At the same time, if you are already in the market for a new computer, Haswell is a better choice than Ivy Bridge if only for the improved idle power draw and additional SATA 6Gb/s ports.