Skip to content
Always look at the date when you read an article. Some of the content in this article is most likely out of date, as it was written on September 24, 2006. For newer information, see our more recent articles. 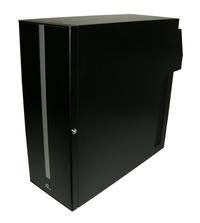 My first thought when I saw this case was “oh dear, this thing is going to weigh a ton.” After picking it up, my suspicions were confirmed. For an all-aluminum case, it’s heavy. 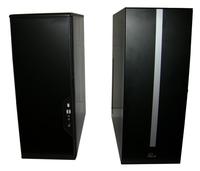 It weighs about as much as Antec’s steel-and-plastic P180. It’s big too: Slightly larger than the P180 in all dimensions. 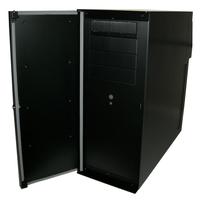 Like the P180, the PC-S80 has a full-height front door. Behind the door are four CD-Rom drive bays, the power and reset buttons, and absolutely nothing else.

The door uses Lian-Li’s typical ball-bearing and spring assembly to hold the door closed. These slide into notches cut into the door frame, holding the door in place without magnets. The door is lockable, with a fairly standard PC case lock on the side of the door. 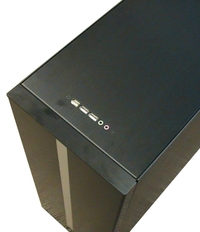 The Lian-Li front panel connectors are on the top of the case. While this makes getting to them interesting when the case is on a desk, they’re perfectly positioned for having the case on the floor. The connectors are the usual Lian-Li setup, with one Firewire, two USB, and both headphone and microphone jacks present. 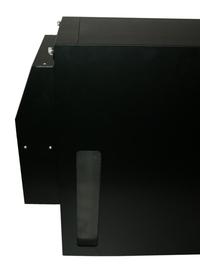 Moving around to the side, we see a mesh-filled cutout near the back of the case. Aside from that, the side panel is featureless brushed aluminum.

The back of the case is more interesting. A huge shroud assembly covers about half of the back. Still visible are the usual mirror-finish Lian-Li PCI backplates, and the standard ATX backplate. Below the shroud is the PSU bracket and a 120 mm fan, blowing into the case. 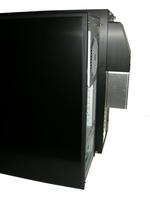 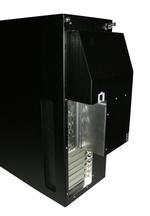 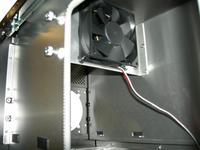 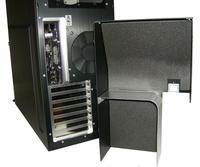 The shroud itself is interesting. Inside, it has the same foam Lian-Li uses inside the V-1100 and 2100 silent cases. The shroud attaches through a system of hooks and holes in the case, precisely like the fan shrouds on V-series cases.

Going in: The Inside

The side panel comes off precisely like the ones in the V-series cases. Loosen a thumbscrew, pull it back, and the side panel tips out and lifts off.

And inside, we’re greeted by… A wall of aluminum. With thunbscrews. There are two removable panels covering the interior of the case. Why on earth are they there? Airflow. 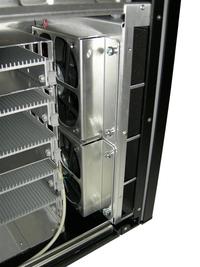 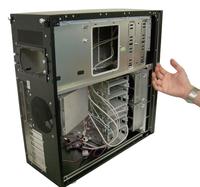 With both panels removed, the case looks slightly more conventional. The hard drive racks have odd looking trays, which double as heatsinks for the hard drives. There’s the typical air duct for the CPU, a fan over the PSU to move more air out of the case, and the accessories are all in the white box. There’s lots of length on the front panel connectors, which will probably come in handy. 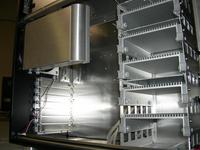 The hard drive mounting system is like most Lian-Li designs: A little unconventional, but rather good. The tray comes out, the screws are unscrewed from the plastic nuts holding them in place, the hard drive is dropped in, the screws are screwed into the hard drive, and the entire assembly slides right back where it came from. The rail system is a little bit stiffer than the ones in V-series cases, but they work exactly the same way. 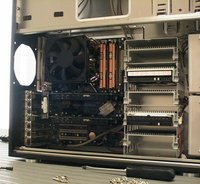 I’ll cut straight to the point on this one: Installing the motherboard isn’t easy. Between the really close hard drive cage, the bottom of the internal frame, and the huge XP-120, the motherboard area feels cramped. Really cramped. It took some creative screwdriver work to get all the screws in place. 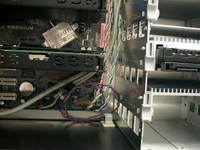 The video cards reach most of the way to the hard drive bays, and the power/reset/led headers are just barely long enough to reach.

Installing CD drives involves the removal of another two panels. Once they’re out of the way, it’s just like installing drives on a V-1000. That is, difficult. To install the top drive, behind the already-installed CD drive bezel, you have to remove the blank bezel below the top bezel, slide the drive into the lower slot from the front of the case (it rides on a set of rails between the upper and lower sets of drive bays), and then lift it up into place. The next drive down slides right in on the rails, which is nice.

What isn’t so nice is trying to get another bezel in for that second drive. The only place to get another bezel in is the very bottom drive bay. so you have to remove all the regular bezels from the case, slide the new bezel into the side of the case, and then raise it up to where the CD drive is located. It only takes me a few seconds to do, but that’s because it’s precisely the same way in the V-1000. The first time I tried to get a second bezel into a case like this, it took half an hour before I found the trick.

The power and reset buttons double as the power and hard drive activity LEDs. The action on the buttons isn’t like normal computer power switches: it’s more like the feel of a DVD player’s power button. 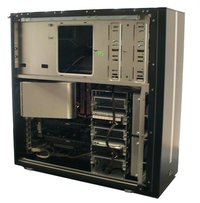 The two video card coolers were quite audible, even with the system sealed up. Running at full power, they were every bit as loud as the hard drive seeks, and loud compared to the old office computers. However, when the nVidia drivers were installed, the noise level dropped significantly. From the front of the case, all I can hear is the Hitatchi’s seeks. There is no fan noise. Listening at the side air vents, fan noise can be heard, but it’s still quieter than the hard drive. As expected because of the case’s unique airflow, there is flow noise at the back, but even that is quiet.

Before measuring load temps, the system was run through 3Dmark 05 twice, with SLI enabled. It ran at the standard 1024 x 768, with no Anti-Aliasing. All temps were measured with ASUS Probe.

For an air-cooled system under load, these are tremendous temperatures. Obviously, the rear intake that blows air straight into the CPU heatsink works, and works well. Between that, and the giant XP-120, the CPU temps are close to that of a low-end water cooled setup.

The case oozes quality, from the gentle click of the front door to the feet that look like they were pulled off an expensive stereo. At first, I was put off by the white stripe down the front door. After a few hours of working with the case, however, I’m starting to come to like it. I’m not one for full front doors, but this is one of the best implementations I’ve seen. When all is said and done, it’s a nice case.

Quiet, cool, and good looking… What’s not to love? Two simple answers, really. It’s rather expensive, and hard to work in. It’s definitely not the case I would recommend for a first build. Getting to the screws to attach the motherboard was difficult, and wedging the second CD-rom bezel into place required knowing a rather obscure trick.

Thanks to Hampton Technologies for generously providing us with the Lian-Li S80 for this review.