Skip to content
Always look at the date when you read an article. Some of the content in this article is most likely out of date, as it was written on January 29, 2015. For newer information, see our more recent articles.

If you are in the market for a new PC, you're probably all too aware of the huge variety of different CPU models available. We've covered the differences between the desktop Intel Core i3, i5, and i7 CPUs in our Haswell Core i3 vs. i5 vs. i7 – Which is right for you? article, but it turns out that there are actually two or three different product lines within each of those brands. You might may be familiar with the "K" or "X" lines, but did you know there are also "S", and "T" lines as well? According to Intel, these letter designators mean: 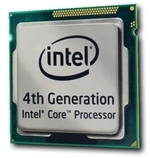 In this article, we want to cover the S-series product line in particular because the specifications for S-series processors are actually very similar to that of standard Intel CPUs. To determine the advantage of S-series CPUs we will first look at the official specifications differences between a couple of S-series processors and their standard counterparts then move on to our own testing and benchmarking to determine the actual performance, power draw, and thermal differences.

To compare the official specifications between S-series CPUs and their standard counterparts we took four of the latest generation Haswell CPUs. There are, of course, more models available from Intel, but we've found that the differences between S-series and their standard counterparts to actually be very consistent, so this is a good representation of the S-series as a whole.

First, the S-series CPUs have a much lower base frequency than the standard CPUs. You would think this means that they will always be slower, but we've shown in the past that the base frequency is somewhat of a meaningless specification due to Intel's Turbo Boost and Speedstep technologies. These technologies mean that an Intel CPU will only rarely operate at the advertised base frequency which brings into question whether this spec actually has any bearing on real-world performance.

The second difference is the lower TDP wattage on the S-series processors. Again, this is a somewhat misleading specification since according to the Intel Ark specification pages, TDP is defined as:

… the average power, in watts, the processor dissipates when operating at Base Frequency with all cores active under an Intel-defined, high-complexity workload

In other words, TDP is only what the wattage of the CPU is when running at the base frequency, not the maximum frequency as determined by Turbo Boost. And since we have found that the base frequency isn't a great indicator of performance, this means that TDP is also a questionable specification. It certainly indicates that the S-series processors should run at a lower wattage, but unless you disable Turbo Boost it does not in any way guarantee it.

Finally, the last difference is the lower T case temperature on the S-series CPUs. This is related to Intel's overheating protection and basically is the thermal cutoff point where an Intel CPU will automatically lower its operating frequency to try to reduce the amount of heat the CPU is generating. More information on this is available in our Impact of Temperature on Intel CPU Performance article. Realistically, as long as a CPU has adequate cooling this specification should never have a bearing on the performance of the CPU.

To sum up, all the official specifications really tell us is that S-series processors may be a bit slower and may run a bit cooler than their standard equivalent but it is far from conclusive. For that, we will need to perform our own testing. This testing gets into some technical details, so if you are only concerned about our conclusions, feel free to jump ahead to the Conclusion section.

For this testing, we used the following hardware:


All driver and Windows updates were applied prior to testing. Coretemp was used to record both the CPU temperature and operating frequency along with a "watts up? PRO" power meter with USB logging to record the system power draw. 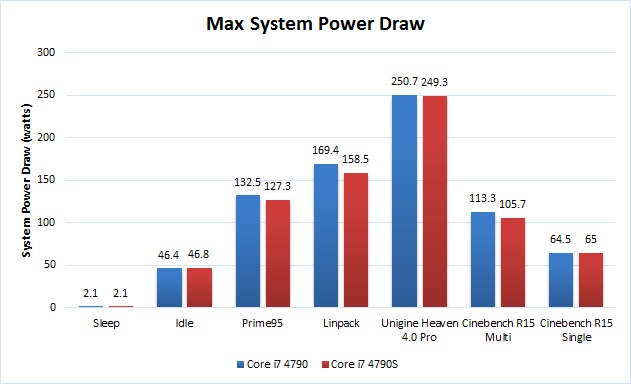 Starting with the overall system's power draw, we found that while the system was idle or in sleep mode, the two CPUs had almost identical power draw. While running our various benchmarks, however, we started to see a mix of results. In both Unigine Heaven 4.0 Pro and Cinebench R15 (single threaded mode) both CPUs had almost identical system power draw. Only Prime95, Linpack, and Cinebench R15 (multi threaded mode) resulted in the Core i7 4790S using less power. Even then, the difference was only 5-10 watts (or 4-7%) which is far less than the 19 watt difference that Intel advertises. 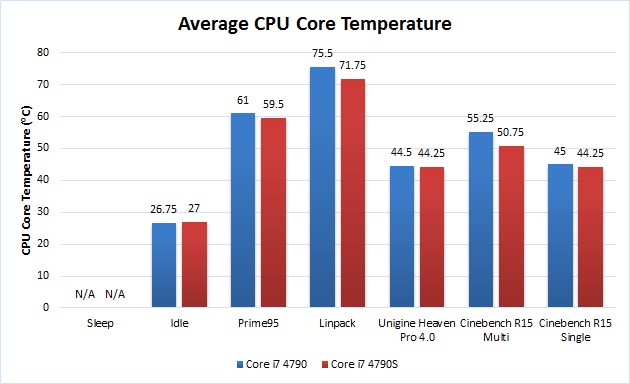 Higher wattage should directly correlate to higher temperatures so it is no surprise that this graph is very similar to the power draw graph. The Core i7 4790S runs at approximately the same temperature as the Core i7 4790 at idle, during Unigine Heaven, and during the single threaded portion of Cinebench R15. Really, the only significant difference in temperature occurred during Linpack and Cinebench R15 (multi threaded mode) where the 4790S ran 4.5 ºC and 3.75 ºC (or 5% and 8%) cooler respectively. 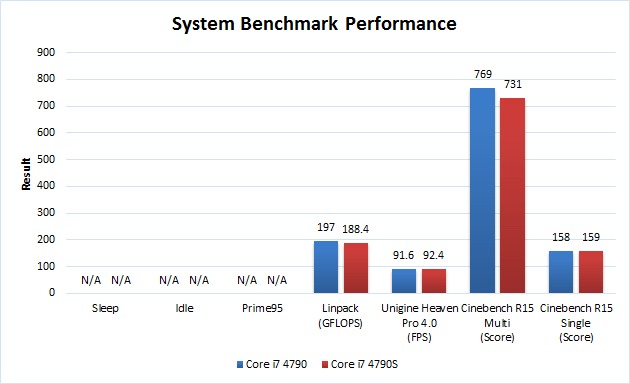 So, why the big variance between the different benchmarks? Obviously, a pattern exists, since the 4790S and 4790 really only showed a difference in power draw, temperature, and performance during Prime95, Linpack, and Cinebench R15 (multi threaded mode). What we believe to be happening is in many ways related to the base frequency specification we discounted during the Specification Differences section. It turns out even if a CPU never runs at its advertised base frequency, this specification is still an indicator of how effective Turbo Boost may be depending on the number of threads an application can use.

Performance based on number of active threads

Likely, the inconsistencies we found in the previous section are related to how many threads each benchmark is able to utilize and how that affected the amount of Turbo Boost each CPU received. To determine the actual amount of Turbo Boost available to our test CPUs based on the number of active threads we ran Prime95 on each CPU with the bechmark limited to between one and eight active threads. 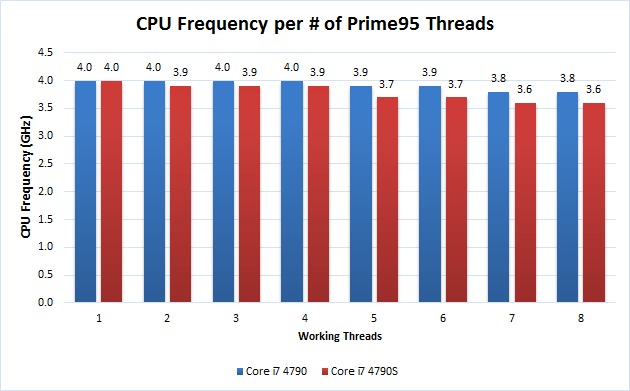 As you can see in the above chart, it is clear that as more CPU threads are being used, the 4790S runs at an increasingly lower frequency than the standard 4790. This means that even though the 4790S and 4790 technically have the exact same maximum Turbo Boost frequency, they are very different as more threads are being used. Depending on the number of threads, the 4790S is anywhere from .1 to .2 GHz slower than the 4790. This isn't much – only about 2.5 to 5.3% slower – but it lines up almost exactly with what we say in our real world benchmarks.

S-series processors are supposed to be lower wattage (that is how they are primarily advertised by Intel) so the slightly lower performance is to be expected and in some ways is secondary to the power draw of the S-series CPUs. What we found was that the 4790S did indeed draw less power when five to eight threads were being used, but with fewer than five threads the 4790S actually pulled more power than the standard 4790 by an average of 6%.

We have no explanation for why this is, although it could simply be that we had an unusually hot running 4790S and an unusually cool running 4790. Either way, our testing with these sample CPUs indicates that the 4790S is actually only lower power when more than half of the total CPU threads are under load.

To summarize both our research and testing results, there are three major ways in which Intel S-series processors differ from the standard models:

Overall, we would say that S-series CPUs can simply be thought of as being slightly slower, slightly cooler, and a little more power efficient than their standard counterparts. None of it is by very much – and in many situations the two models are really identical – but if you want a system that uses slightly less power in exchange for slightly lower performance than the S-series processors may be worth considering. One thing to keep in mind is that S-series CPUs are usually priced exactly the same as the standard CPUs so unless the small power savings is important you will get better performance for your dollar from the standard models.