Is CPU Base Frequency Still a Relevant Spec?

For roughly 13 years now, CPU have been able to vary their frequency using a number of different technologies. The first use of this concept was in January of 2000 when Intel introduced SpeedStep which lowered the frequency of the processor when it was at an idle or low load state. A bit more recently, both Intel and AMD have introduced what basically amounts to automatic, on-demand overclocking. Intel's Turbo Boost (introduced in March of 2009) and AMD's Turbo Core (introduced in April of 2010) use similar, although very different, methods to allow the CPU to run beyond it's base frequency to provide a boost in performance when it is needed.


With the combination of both of these types of technologies, the speed of the CPU will vary by a good amount depending on how much load is being put on it. Simply checking the benchmark logs we keep for each system we build shows that this is indeed the case. The big surprise we keep coming across is simply how little time modern CPUs spend at their actual base frequency. Since CPUs are now able to dynamically adjust either below or above the base frequency depending on the load, it has made us start to question whether the base frequency of a CPU really means anything on modern processors.

To try to get a handle on this question, we went through our logs and created graphs showing the actual frequency different CPUs run at throughout our benchmarking process.

Here at Puget Systems, every single computer we build goes through an extensive suite of benchmarks. During these benchmarks we log data such as CPU/GPU temperatures, fan speeds and the CPU/GPU frequency. Because of this, we are able to pull up data on the actual operating frequency for almost every CPU we sell.

While our data comes from multiple systems in various configurations, one thing that each has in common is that the CPU always has adequate cooling. We never allow our systems to operate anywhere near the thermal limits imposed by Intel or AMD, so at no point is the CPU thermally restricted which would affect how fast the CPU is able to run. We also verified that the results we are using are in line with other systems that use the same CPU. So the data we are showing is representative of the CPU model, not simply an individual machine.

Our benchmarking process goes through a large number of benchmarks and test suites which has the advantage of producing highly varied loads on the CPU. This benchmark suite includes the following tests:

Before we look at the log files from a variety of CPUs, we first want to see what speeds the latest CPUs from both Intel and AMD are supposed to run at. Note that while the base and Turbo frequency is readily available via Intel or AMD, the minimum frequency (either by SpeedStep or Cool 'N' Quiet) is not actually advertised. Instead, we had to determine those values from our own log files.


For Intel, the Core i3 CPUs are different than the other models as they do not support Turbo Boost. So for those CPUs, the base frequency is actually the fastest they can run without manual overclocking. One interesting thing we found is that the lower end CPUs (the i5 4440 and i7 4820K) for each socket actually have a much smaller Turbo Boost than the higher end models.


For AMD, the amount of Turbo you get on on each CPUs is seemingly a bit more random. The only pattern we can deduce is that the lower models of each core count have a lower increased Turbo frequency than the higher end models. 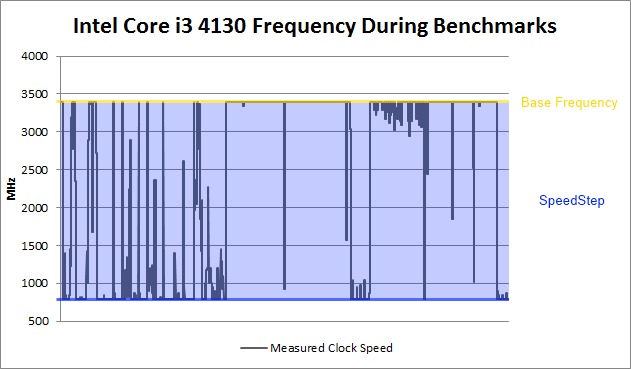 Since Intel Core i3 CPUs do not support Turbo Boost, the results are pretty much exactly what you would expect. The CPU down-clocks when it does not need to run at full speed, and ramps up to it's base frequency as required. 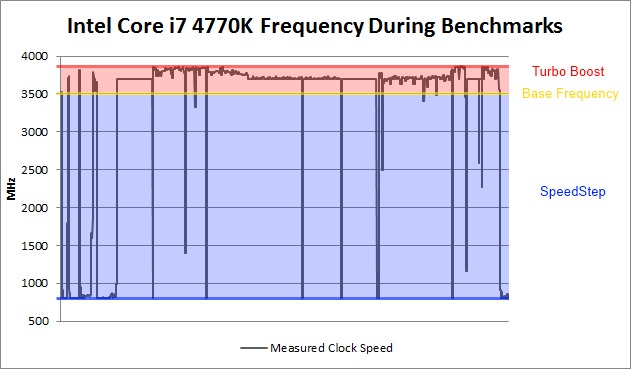 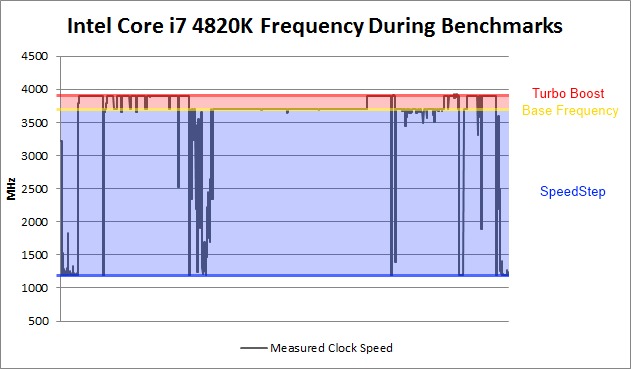 Unlike the i7 4770K, the i7 4820K actually did spent a decent amount of time at it's base frequency. Also unlike the 4770K, this CPU tended to jump between the base and Turbo frequencies without spending much time in between. 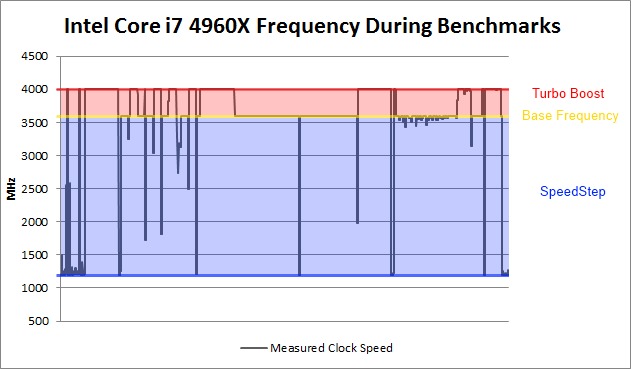 The i7 4960X is remarkably similar to the i7 4820K even though the frequency increase from Turbo Boost is much larger. Once again, when the CPU was under load it spent most of its time either at the base or Turbo frequency, rarely operating at any point between the two. 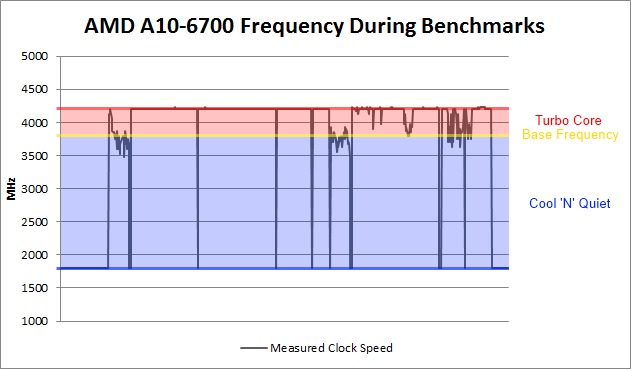 Moving to AMD, the A10-6700 results are more in line with what we originally expected to see from a modern CPU. It spends a decent amount of time hovering around the base frequency, but spends most of it's time at the maximum Turbo frequency or very close to it. 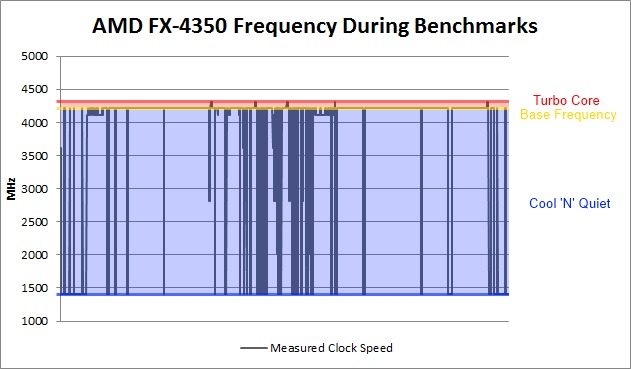 The FX-4350 has a very small Turbo frequency increase, but even then it spent very little time at that Turbo frequency. Most it the time it was either at the base frequency, the minimum frequency from Cool 'N' Quiet, or at some point in between. 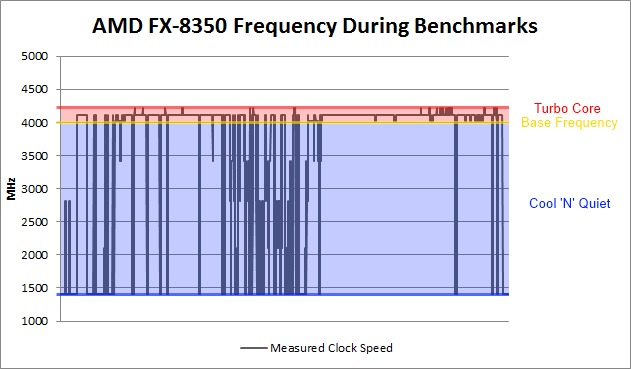 Like the Intel i7 4770K, the AMD FX-8350 spends much of its time between the base and Turbo frequencies. It very rarely actual ran at either the base frequency or the full Turbo frequency.

As expected, for CPUs that don't support Turbo Boost or Turbo Core (like the Intel Core i3 CPUs) we found that the base frequency is exactly the speed that the CPU runs at when under a heavy load. But for the CPUs that do support either Intel or AMD's brand Turbo technology, the speed at which the CPU operates appears to vary greatly depending on the individual CPU model.

Some - the Intel Core i7 4820K/4960X and the AMD A10-6700 - spent much of their time at either the base or Turbo frequency, with very little time spent in between. Others - the Intel Core i7 4770K and the AMD FX-8350 - were somewhat the opposite as they mostly sat right in between the base and maximum Turbo frequency. Still others - the Intel Core i3 4440 and the AMD FX-4350 - spent most of the time at the base frequency; rarely going above it even when Turbo was supported. We again want to point out that we checked these results against multiple machines, so it is not that one CPU is simply binned a bit differently than another. Our results were extremely consistent across multiple machines, much more than we initially expected.

We even asked Intel and AMD directly what the base frequency actually meant on modern CPUs, but neither was able to contribute anything terribly useful.

After examining our log files, really the only solid conclusion we can make is that the speed at which a CPU operates (relative to the base frequency) varies greatly depending on the CPU model in question. We were really hoping for a more conclusive conclusion, but our data simply doesn't allow for very many generalizations to be made. The fact that the actual speed of a processor relative to it's base frequency varies so much be the individual model makes this a very difficult question to answer. So instead, we will simply ask you, the reader. After looking at these results, do you feel that the base frequency is still a relevant specification? Should CPUs continue to be advertised primarily with the base frequency, or does the Turbo frequency (or a combination of the base and Turbo frequencies) make more sense?