There has been quite a bit of talk recently about Intel Core i7 CPUs and what temperature they should be running. The Core i7 CPUs have a TDP of 130W, and run quite hot compared to the Core 2 Quad CPUs we've used in the past. How hot is too hot? A Google search shows that there is massive confusion and misinformation around the web. In the absense of good information, I decided to find out for myself. As an Intel Premier Provider, I talked to an Intel engineer, and am writing to tell you what I found. 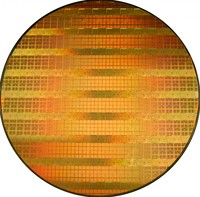 The first thing to note is that you're going to see a wide variation in temperature from one CPU to the next. It is important to understand how CPUs are made. Intel manufactures a large wafer of semiconductor material, which is then sliced up into pieces to make their CPUs. Due to standard margins of error caused by everything from humidity to gravity, the quality of the material varies over the surface of the wafer. When they build the CPU, they have to test it to see how good the quality is. The impurities and imperfections cause the CPU to run at higher temperatures, so they name the CPU based on its quality. If it tests extremely well, they program it to be a Core i7 965 CPU. If it doesn't test as well, they program it to be a Core i7 920 CPU. This process is called "binning." This doesn't mean that the 920 CPUs are low quality...each CPU is thoroughly tested for the speed at which it will be running. I could even speculate that since we don't see a supply shortage on 965 CPUs, that they have a surplus and are likely using chips that qualify as 965 to make 940 and 920 CPUs at times.

The point, however, is that each "bin" has some variation to it. If you have a CPU that just barely made the cut to be called a 940, it will run quite hot as a 940. If it just missed the mark to be a 940, they call it a 920 and it will run very cool as a 920. In practice, we see as much as a 10-20C variation in temperature per CPU when cooled with an Intel stock cooler. That's a big difference! Again, that doesn't mean that the hotter CPUs will not work just fine, but it does mean that it is very difficult to answer the question: what temperatures are normal?

When I talked to an engineer at Intel, I asked him for information on what temperatures the Core i7 CPUs will throttle at, and what temperatures are considered normal. I was surprised to hear him say that he didn't know the answer. He said he'd find out. A few days later, I got a call back, and I was even more surprised. He says that information is a trade secret, and Intel is not making it public. What?!?

The key to understanding this answer is to understand that to Intel, the only valid cooling solution is the Intel stock heatsink. They do a lot of validation on those heatsinks, to verify that they work properly under all conditions described in the technical specs of the CPU. From their perspective, the only thing the end user needs to know is that the stock heatsink is good. Use it, and don't worry about it. 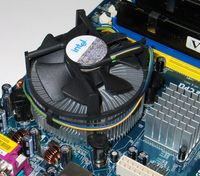 Of course, the problem is that only generic, low quality machines use stock Intel heatsinks. I'm not knocking Intel here -- their stock heatsinks are actually quite good. However, we have found that many people want their system to run more quietly, or they want to overclock their system. Or maybe they just understand that running your CPU at lower temperature leads to the longest life possible, and therefore want the best affordable cooling they can get. The real world is very different from the way Intel thinks of it. I think they need to open their eyes to the fact that there is a huge amount of people running with 3rd party heatsinks, and help minimize their failures by providing the information necessary to ensure that their CPUs are being adequately cooled. Until Intel comes to this realization, Puget Systems will simply resolve to doing the testing ourselves. I'm happy to share this information, and while word straight from Intel is more authoritative than ours...what we have is better than nothing!

There are various ways to measure the temperature of your CPU, but the program we use is called CoreTemp. A program like this will read the sensor straight from the CPU. However, what the CPU sensor reports is not an absolute temperature, but rather how far the temperature is from the maximum safe temperature. So if your CPU's maximum temperature is 100C, and you're running at 60C, the sensor will report -40 as its value. There are two ways a program can report an inaccurate temperature. First, if the program isn't set with the right maximum temperature for your CPU, all the scores will be offset that that error. That's why a new version of CoreTemp was needed after Core i7 was released -- they had to program it with the Core i7 information. The other way the readings can be inaccurate is due to inaccuracies in the sensors themselves. These sensors were designed to safeguard the CPU from overheating, so they are highly accurate as the CPU approaches the maximum safe temperature. As the CPUs run cooler, they are known to have a lower degree of accuracy. There's a great page on the Real Temp website that talks about this in more detail.

Our recommendation is to keep Intel Core i7 CPUs under 80C. That gives you a healthy margin in case you're running a heavy load on your CPU on a particularly hot summer day. Due to the manufacturing process of Intel Core i7, and the improved power management features, we're comfortable at up to 80C, even though this would be considered a very hot temperature with an Intel Core 2 Quad CPU.

In the long run, the cooler you run your CPU, the better. That's why we recommend the Puget Hydro CL1 for a CPU cooler, as we've measured it to significantly outperform the other coolers available, including the Intel stock cooler.