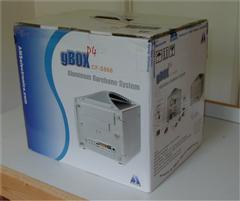 I have been looking forward to working with the AMS gBox P4 for quite some time. The popularity of our Micro System, using the Shuttle SV24 box, led us to believe that there was a good demand for high-end portable systems - especially in the gaming sector. While looking for something more appropriate than the Shuttle SV24, we happened to be contacted by AMS, whose gBox P4 system boasted a Pentium4 DDR solution and included an AGP port! The inclusion of an AGP port is very important, as it allows you to ditch the onboard video and put the latest GeForce4 card in, making the machine a wonderful gaming box. We worked with AMS, and announced our Mini System II a week later. In the first week it quickly got its first handful of sales, which definitely confirms that there is a demand for such a high-end portable machine!

A full specification sheet for the AMS gBox P4 can be found on the AMS website by clicking here. We've already noted the inclusion and benefits of a AGP port. It also comes with a PCI port, allowing you to put in your firewire card, DSL modem, or whatever you'd like! Onboard, you'll find four USB2.0 ports, network, sound, video (with TV out), and your standard PS/2 and serial ports. It is worth noting that there is no parallel port! If you need a parallel port, you'll have to put a controller into your PCI slot. This is undoubtedly due to the fact that most printers connect via USB these days, but I can still see it causing problems for our clients. In the front, you'll find two of the USB 2.0 ports, a joystick and mouse port, sound connectors, and an infrared port! Overall, the capabilities of this machine are very good, though I was surprised with the lack of a parallel port. In the picture to the left, you'll also see that we disabled the onboard video and put a video card into the AGP slot. From the very beginning, AMS has repeatedly encouraged us to bundle this unit with a GeForce4 Ti card, so we used a Leadtek GeForce4 Ti 4400 card for this review.

The box is pretty much what I expected - a sturdy box with a handle. That makes it great for transporting the system. The internal packing and padding is very good. Inside, you'll find your manual, driver CD, heatsink and fan, and cables. They use a thermal compound instead of thermal tape, which is good - thermal compound does a better job of cooling. The heatsink has a copper core, which does a better job of conducting the heat away from the CPU. Overall, it looks like a promising cooling setup. The IDE cables are cut into sections, making them quite similar to round cables. Not only will that help a little with the airflow in the case, but it will make the drives much easier to plug in (I remember the full ribbon cables being a hassle to work with in the Shuttle SV24). 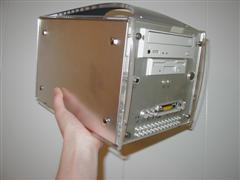 The unit itself looks very nice and is quite sturdy. Here, I hold it in my hand for perspective, just as I did with the Shuttle system. Kids, don't try that at home! I actually took that shot after the system was complete, and nearly pulled a muscle trying to get my arm extended far enough for a clear shot! The system is defnitely a bit heavier than the Shuttle system, and that's not too suprising considering how much more sturdy the gBox is. Each side panel comes off independently, and the paneling is a lot thicker and sturdier than that of the Shuttle system. The entire box is covered with a thick clear paneling which gives it a very nice look. I had initial fears of scratching the coat, but I ended up not having to be teribly careful. On top, there is a carrying handle, which looks to be removable with a simple hex screwdriver.

Inside, we see the Pentium4 478 socket, and the two DDR DIMM slots. To the left, we see the PCI and AGP slot...that are both obstructed by the front ports cable bundle. I'm getting my first worries of a problem here, but everything is OK so far.

The CPU and memory installation is a breeze. It took me a little while to figure out that the CPU fan clips needed a little good old fashioned brute force, but there were no problems. After the system was complete, we noticed that there was plenty of room to use the Intel heatsink and fan, but we used the ones supplied by AMS so that we could see how good a job they did of cooling the CPU. What we found was that both fans did a great job -- under full load, the system didn't even break a sweat, and ran very stable. The benefit of the stock Intel fan is that it is about twice as quiet! It is larger, making it a little more difficult to install, but if you'd like a quiet system, that's definitely the way to go. The casing for the floppy drive and hard drive is removable, making that installation fairly easy, and the DVD-ROM we're using went in just fine. Then we get to the video card.

We encountered problem after problem getting the video card in. It took us twice as long to get the video card in as it did to put the rest of the system together! Since AMS has always been very strong in their encouragement to bundle the unit with a GeForce4 Ti video card, I was under the assumption that there was adequate room for the card! Unfortunately, that was not the case! Now, I don't want to pin that all on AMS. We used a Leadtek card, which has a very large heatsink, and that heatsink was the source of half our problems. 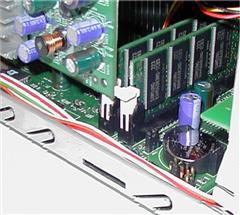 Our first problem, however, was the that video card was too long, and was obstructed by the memory! Only the closer of the two memory sticks was in the way, and if it were only half a centimeter farther back, there would be no problem. I thought about simply popping out the white retention clip to solve the problem, but I didn't like the idea of non-secured memory. Instead, we used our handy Leatherman tool (you'd be surprised how many uses that thing gets here!) to cut and file away at the clip, until a good portion of it has been removed. We still have to bend the video card a few degrees, but it works. Of course, I can write this paragraph in a few minutes, but it took us about an hour to come to this solution.

At that point, it still required a lot of coaxing to get the video card into the AGP slot, and then we were hit with problem #2 - the front port cable connector would not let the card sit all the way down into the socket. At this point, all I could do was laugh and break out the Leatherman again. A few minutes of filing, and then the video card could be seated properly. 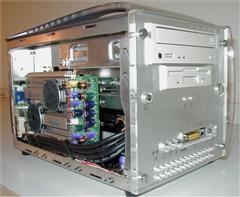 Finally! Now we can close up the case, right? Here we hit problem #3. The video card is actually sticking out too far to allow the side panel to close properly. After a lot of adjusting of the front port cables (putting each cable between two of the heatsink fins), we are finally able to get the case shut.

It's probably very obvious that I am very disappointed by these video card problems. If AMS is going to push so hard to bundle the unit with a GeForce4 Ti card, they had better make sure that the cards will fit! Yes, the Leadtek card has a larger heatsink than most other cards, but GeForce4 Ti cards are all very large, and I can see this being a very widespread problem. On the other hand, if you are purchasing this unit as part of a system from Puget Custom Computers, then these are all things that we take care of - you'll never had to deal with it. We'll just keep a nice big bottle of aspirin at the end of the assembly bench. :)

The last thing to note about the video card is that we experienced over-heating problems during our testing. It was only when the video card was under a long period of high load that there was a problem, but that is still not acceptable. This is definitely due to the fact that the side panel is right up against the video card.

Obviously, this Leadtek card was not a good choice for the gBox. We had an Asus GeForce4 Ti 4600 card in stock, so we put that in to see how it did. And the result? It fixed nearly every problem! The memory is still in the way, but with a slight bend of the video card and our Leatherman handy-work, we were able to deal with the problem. The Asus card has a much smaller heatsink, so fitting the card into the slot was no longer a problem, nor was closing up the case. We ran it through the night under a 3DMark burn in, and it ran rock solid! The moral of this story -- if you're going to put a high end video card into one of these gBox machines, make sure it has a small heatsink. That will fix both your size and airflow problems.

So, now we have a completed gBox P4 1.8GHz system, with 1.0GB of DDR memory, and a GeForce4 Ti 4600 video card. This should be a great performer, especially for gaming! Benchmarks gave mixed results, but looked very good. This system IS able to compete with its larger counterparts, and that is very encouraging. We also tested the system with the onboard video, and while we found it to be entirely adequate for business use (email, word processing, etc), it definitely isn't very good for gaming. 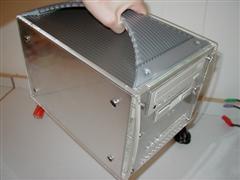 All in all, we're very happy with what we have here. Without a high end video card in the AGP slot, we have a high performance business workstation, or a great little system for home use. The value and small size of this system will certainly make it attractive to many people. With a high end video card, we have a portable gaming machine with quite a punch to it, and its portability makes it a great choice for LAN parties. The fact that this system can work so well in both the business and gaming sectors make us quite hopeful of a great success for the gBox. I look forward to building more of these machines. If you'd like to configure one of your own, just visit our configuration page by clicking here!