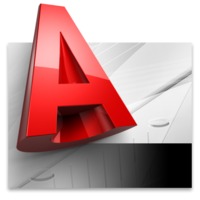 Unlike Adobe Photoshop and Premiere, AutoCAD 2013 does not have any specific features or effects that are GPU accelerated. Instead, almost everything that looks 3D uses the GPU in some manner. You still need to balance a powerful video card with a good CPU and RAM combination, but the video card you use for AutoCAD is an extremely important part of the performance equation.

In this article, we want to explore the performance differences between a wide range of different video cards, including the current generation AMD Radeon and NVIDIA GeForce cards that are not on the certified list. In order to do so, we will be using the Cadalyst 2012 v5.4 benchmark on AutoCAD 2013. This benchmark is a full system benchmark that tests 3D and 2D graphic performance as well as disk and CPU performance. For the purpose of this article, we will largely be focusing on the 3D and 2D results, but will also use the "Total Index" or overall score. More information on the benchmark and the individual tests can be found here.

Since visual aids are a great way to get a feel for a benchmark, we also recorded a single benchmark run using FRAPS to help you get a feel for exactly what is tested by this benchmark:


AutoCAD 2013 was configured according to the Cadalyst benchmark readme.txt and was run three times per video card to ensure accurate results. At the moment, neither AMD nor NVIDIA has a specific driver or plugins for AutoCAD 2013 so just the base driver was used. 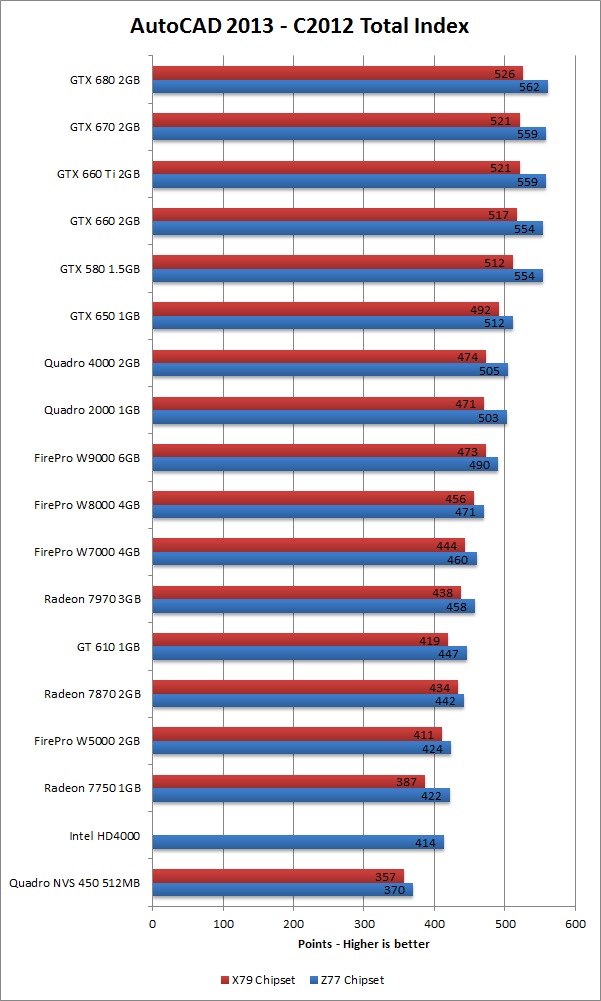 Before we examine the overall results, there are two things to point out. The first is something we did not even intend to benchmark, which is that the Z77 system consistently scored higher than the X79 system. Considering that we were using the fastest CPU currently available for each platform and identical RAM, we can conclude that the Z77 platform (using Ivy Bridge CPUs) performs better than the X79 platform (using Sandy Bridge-E CPUs) in AutoCAD 2013. Second, 2D graphics does not appear to be affected by the video card at all. While there is some variance in the results, they are all minor enough to simply be normal testing fluctuations.

The biggest surprise in our results is how poorly the AMD video cards tested. Relative to each other, the AMD cards are right where we would expect them to be, but they all are way under their NVIDIA counterparts. Even the top of the line AMD FirePro W9000 was only able to match the much cheaper NVIDIA Quadro 2000 and 4000. On the subject of workstation cards, the Quadro 4000 did OK, but we were surprised to see how little of a performance advantage it gave over the Quadro 2000.

The onboard Intel HD graphics did decently, actually performing better than the Quadro NVS 450. It's still near the very bottom of the charts, but the gap between it and the lower-end discrete cards was not as large as we expected. Don't expect to do any complex modeling with it, but if you just need it for very light tasks it should actually be able to keep up.

According to our benchmarking, the NVIDIA GTX cards are much faster than the NVIDIA Quadro or AMD FirePro cards, but what many do not realize is that FirePro and Quadro cards are not primarily about speed. The main feature of of worstation cards is their double precision preformance which allows the card to be many times more precise. As a roughly comparison, consider the difference you would get if you were to compute the area of a circle with pi being just 3.14 versus 3.14159. The difference is small, but it can easily compound over time. In addition, the NVIDIA Quadro 5000/6000 and AMD FirePro W8000/W9000 use ECC memory for their video RAM which is much mroe reliable than standard video memory. 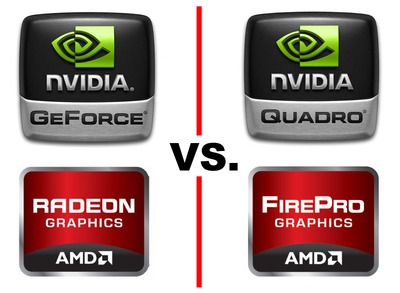 When gaming, precision is not really needed since one small artifact every 1000 frames is not noticeable to the human eye. When you get into 3d modeling or simulation, however, one small artifact can cause big problems. In a professional environment, you want to be 100% sure that everything was completed properly the first time and that there are no small artifacts in the results. For example, if you are modeling a bracket that will be used in a million dollar football stadium, you want to be 100% confident in the load simulation results. Workstation cards are really the best way for you to be confident in the results.

So, the foremost question when it comes to Desktop vs. Workstation graphics is actually not about which has the best benchmark performance, but rather if speed or precision is more important to you. If you are a gamer that dabbles in 3d modeling, a GeForce or Radeon card will likely work great for you. If you are a professional that needs consistent results that you can be 100% confident in, it is likely worth the slightly slower Quadro or FirePro card for the assurance that there will be no minor problems with your model.

Another point to take into consideration is that NVIDIA Quadro and AMD FirePro cards are the only modern cards that AutoDesk has officially qualified for AutoCAD. Obviously the NVIDIA GeForce and AMD Radeon cards do work, but they technically are not endorsed by AutoDesk.

If you decide that a desktop class card is suitable for your needs, the GeForce GTX 660 does a very reasonable job, almost matching the more expensive GTX cards. For the best possible speeds, the NVIDIA GeForce GTX 680 came out at the top of our 3D and overall benchmark results. The AMD Radeon cards unfortunately did not do as well as we hoped with only the AMD Radeon HD 7970 being able to outperform even the low-end NVIDIA GT 610. At the moment, NVIDIA cards are the clear winner from a performance standpoint.

So in conclusion, the NVIDIA GTX 660 is a great way to get close to the performance of the GTX 680, yet costs substantially less. If you are a professional that needs consistant, precise results, the NVIDIA Quadro 2000 is a great balance of performance and cost.