Skip to content
Always look at the date when you read an article. Some of the content in this article is most likely out of date, as it was written on October 1, 2013. For newer information, see our more recent articles. 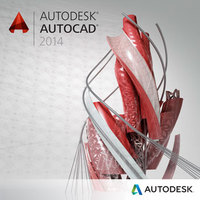 In a previous article exploring GPU acceleration for AutoCAD 2013, we looked at the performance of both desktop and workstation video cards. Even though many of those video cards were not on AutoDesk's certified list, we found that desktop cards are a great option when you want great performance on a budget. However, using a card that is not certified is often not an option for professional users. If you need reliability or the additional features found in workstation cards or their drivers – such as double precision computing or ECC video memory – there really is no substitute for a high quality workstation card.

In this article, we are going to take a look at the latest NVIDIA Quadro and AMD FirePro cards on the latest Intel CPUs and chipsets. To test the performance of each card, we will be using the Cadalyst 2012 v5.4 benchmark with a few minor tweaks to allow it to run on AutoCAD 2014. Cadalyst is a full system benchmark that tests 3D and 2D graphic performance as well as disk and CPU performance, but for the purpose of this article we will be ignoring the disk and CPU scores.

To see how each video card performs with different chipsets, we used two separate testing platforms consisting of the following hardware and software:


To thoroughly test both AMD FirePro and NVIDIA Quadro video cards, we used the cards listed below. With the exception of the AMD FirePro W9000, all of the workstation cards are certified by for use with AutoCAD. This is likely a simple oversight as we can’t imagine it having any issues with the W9000 when the other W-series cards are all certified. To provide a comparison to more standard desktop cards, we also included the NVIDIA GTX Titan which is currently the fastest single GPU video card available.


The latest drivers for each card were used (320.86 for NVIDIA Quadro, 320.49 for NVIDIA GTX Titan, 12.104.2 for AMD FirePro) along with the latest drivers and BIOS versions for the motherboard and other components. All Windows and software updates were applied before starting our testing. Note that AutoCAD currently does not support multiple video cards, so we will only be using a single card.

We will be using the Cadalyst 2012 v5.4 benchmark with a few minor tweaks to allow it to run on AutoCAD 2014. Beyond following the setup information in the Readme file, we also had to add the benchmark location as a trusted path with the TRUSTEDPATH command and set “SECURELOAD=0” and “SDI=1”. Since the CPU and hard drive are not something we are concerned about, we will be ignoring the disk and CPU specific results. More information on Cadalyst and the individual tests can be found here.

Since visual aids are a great way to get a feel for a benchmark, here is single benchmark run using FRAPS that we recorded in our AutoDesk AutoCAD 2013 GPU Acceleration article to help you get a feel for exactly what is tested by this benchmark: 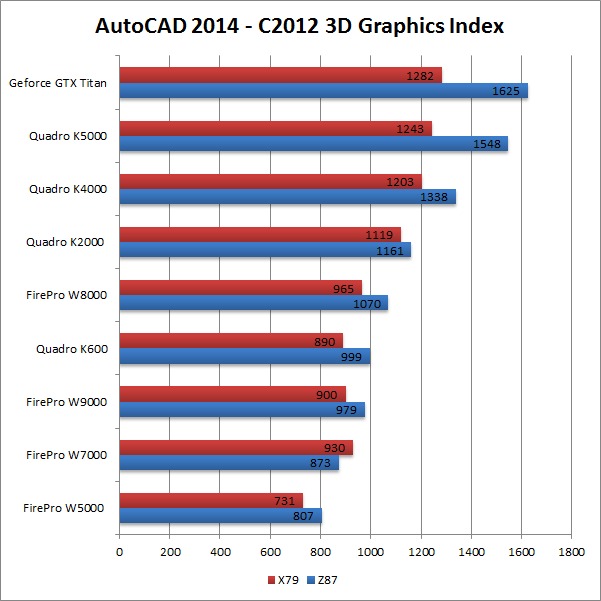 After examining the results, we found that the 3D index score most clearly shows the performance difference between these cards. However, if you are concerned about overall system performance rather than comparing just the video cards against each other, the total index chart above – which is influenced heavily by the CPU and disk performance – would be a better chart to look at.

There are a few things that are immediately apparent in our results. First, NVIDIA has a very clear lead over AMD from a performance standpoint. The odd thing is that the AMD FirePro W9000 (which is the only workstation card not on the certified list) actually performs worse than the FirePro W8000. So the "mistake" of the W9000 not being certified may not be a simple oversight as we initially though.

Other than the W9000, the rest of the cards perform exactly as we would expect. The K600 is the lowest performing Quadro card, followed by the rest of the product line in order. Like we found in our AutoCAD 2013 GPU acceleration article, we once again clearly see that going with a desktop card like the GTX Titan (which is priced between the K4000 and the K5000) is a very cost effective solution when you need performance on a budget. The nice thing is that the performance gap between workstation and desktop cards is not nearly as large with the latest K-series of Quadro card. So you no longer have to give up nearly as much performance to get the features (and certifications) of a workstation card.

From our testing, there is really only one overriding suggestion we can make when choosing a workstation card for AutoCAD: pick NVIDIA over AMD. Of course, there are still times when you would go with an AMD card (for example, you use the system for other software as well that greatly benefits from using a FirePro card) but for strictly AutoCAD use, NVIDIA is currently in the lead performance-wise.

As for which card you should pick, it is really going to depend on your budget. The speed of the CPU makes a big difference in AutoCAD – bigger than the GPU in most situations – so you should first focus on getting a powerful CPU. After that, it simply comes down to which card you can afford. The Quadro K600 is a great choice when on a tight budget as it has decent performance at an even more decent price. The Quadro K2000 is also likely a popular choice as it is just a little slower than the Quadro K4000 and K5000 at almost half the price. 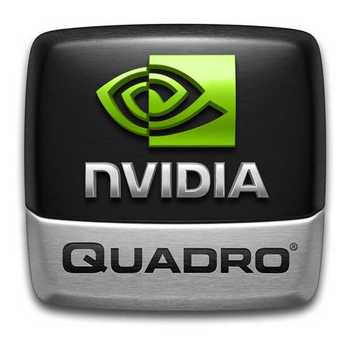