Skip to content
Always look at the date when you read an article. Some of the content in this article is most likely out of date, as it was written on September 27, 2013. For newer information, see our more recent articles. 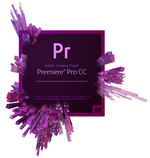 We have looked at GPU acceleration performance in Premiere Pro before in our CS6 GPU Acceleration article, but that article was focused mostly on desktop (or "gaming") video cards. This time, we are going to look almost exclusively at professional workstation cards. And since professionals can often justify larger budgets that home users, we also decided to include dual GPU configurations in our testing. 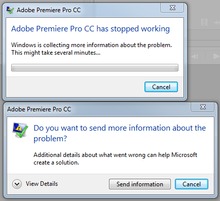 One thing we want to be clear on before we get into our testing is that for the majority of Premiere Pro CC users, a desktop card is going to give you better performance at a much lower price. The advantage of using a workstation card is largely in how quickly Adobe officially certifies newer workstation cards and drivers. So if you have an issue with Premiere, you are much more likely to get a fix from Adobe if you are using a NVIDIA Quadro K4000 versus a NVIDIA GTX 780 simply because the Quadro card is on the certified hardware list. In fact, in our testing Premiere would crash when we enabled SLI with dual NVIDIA Geforce GTX Titans. Take it out of SLI (which isn't required for full performance anyway), and it works just fine.

So even though a desktop card may give better performance, if you need to operate with as few issues as possible a workstation card is usually a safer choice. There are some advantages to workstation cards such as double precision performance and ECC RAM on the higher-end cards, but for movie encoding those are usually not a very large factor.

To see how each GPU performs with different chipsets, we used two separate testing platforms consisting of the following hardware:


To thoroughly test both AMD FirePro and NVIDIA Quadro video cards, we used the cards below in both single and dual GPU configurations. To provide a comparison to more standard desktop cards, we also included the NVIDIA GTX Titan which is currently the fastest single GPU video card available.


The latest drivers for each card were used (320.86 for NVIDIA Quadro, 320.49 for NVIDIA GTX Titan, 12.104.2 for AMD FirePro) along with the latest drivers and BIOS versions for the motherboard and other components. All Windows and software updates were applied before starting our testing. With the exception of the NVIDIA GeForce GTX Titan, all of these cards are currently on Adobe’s supported card list. Note that SLI/Crossfire does not need to be enabled for dual GPU configurations. In fact, NVIDIA drivers currently do not allow SLI with Quadro cards except on a few very specific prebuilt systems.

To measure the performance of each card, we encoded two different timelines using Premiere Pro CC with GPU acceleration enabled. The first timeline was taken from the H.264 portion of the PPBM6 benchmark for Premiere Pro CS6. This timeline has multiple 1080p clips with various effects and overlays. Not all of the effects are GPU accelerated, however, so the CPU will play a relatively large role in the overall performance.

Since this timeline was not intended for Premiere Pro CC, we had to make a few minor modifications to attain full compatibility with Premiere Pro CC. First, we had to re-import several clips (AA004701.MXF and AA006401.MXF) due to a mismatch in the number of audio streams. Second, we had to change the encoding file slightly from 29.97fps to 25fps in order for the timeline to properly encode. Due to these changes, our results are not directly comparable to other PPBM6 benchmark results that you might find online.


For our second timeline, we used parts of the 4k movie Secret World and applied various GPU accelerated effects and transitions as well as rotations and scaling. In order to really push the video cards, we set up six 4k clips on top of each other, each with a different effect applied. We chose to encode to H.264 at the same 4k resolution and 24fps as the original clip. While the CPU is certainly still used, this timeline should place a much heavier emphasis on GPU acceleration and should more clearly show the differences between each card in a worst-case scenario.

One thing we want to point out is that there are currently a few GPU accelerated effects that are not compatible with AMD video cards – Fast Blur, Gaussian Blue, Directional Blur, and the Basic 3D effect. In order to keep these from skewing our results, we left them out of our timeline entirely. More information on this is available from Adobe’s OpenCL and Premiere Pro CS6 blog post.


For both of these timelines, a custom AutoIt script was used to time how long it took to encode each movie. 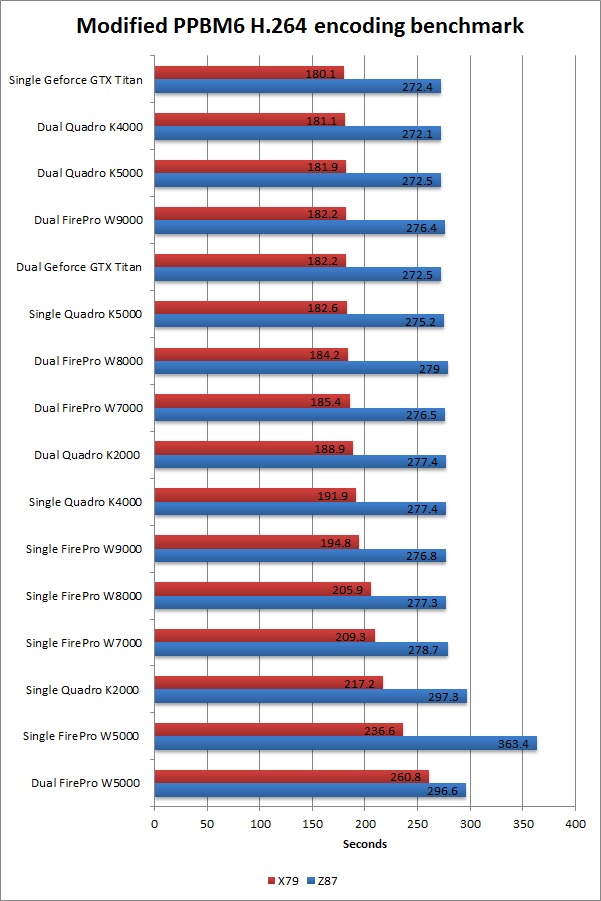 With the results sorted according to the X79 results, we get a chart that is strikingly similar to what we saw with desktop video cards in our Premiere Pro CS6 GPU Acceleration article. Just like in that article, we hit a very clear wall where no matter how fast the video card, the rendering time simply didn't go down any further. This is due to the fact that the timeline included some effects that are not GPU accelerated so the video card ends up waiting for the non-accelerated effects to finish before continuing. One interesting tangent is that this "wall" was about 70-80 seconds lower than what we saw in our previous article. This is likely due to a combination of improvements in Premiere Pro CC compared to Premiere Pro CS6 and the fact that we are using newer (and faster) CPUs in this article.

With the Z87 Haswell system, we hit the performance wall right after the lowest-end cards – the NVIDIA Quadro K2000 and the AMD FirePro W5000. Interestingly, the FirePro W5000 did worse when we used two cards than when we used just a single card. We don't know why this is, but we verified the result many, many times with multiple driver and even full OS re-installations.

For the X79 Ivy Bridge-E system, there was a bit more headroom but there are definitely diminishing returns almost immediately. You could use an AMD FirePro W8000 over an AMD FirePro W7000, but you will be spending a lot of extra money for about 1-2% decrease in rendering times.

With these diminishing returns, it is hard to really give a recommendation on which card is best for this type of movie rendering. The NVIDIA Quadro K2000 is one of the best cards for the price as it is almost as fast as the higher end cards but is much more affordable. The nice thing about it is that if you need a bit more performance in the future, you can purchase a second one and get performance equivalent to a NVIDIA Quadro K4000 or an AMD FirePro W9000. 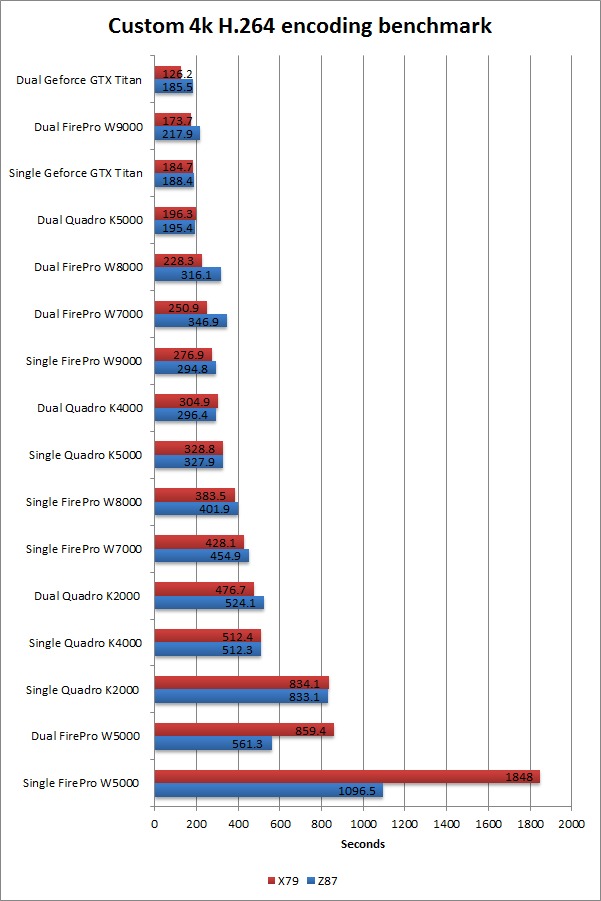 When we upped the clip sizes to 4k resolution and focus solely on GPU accelerated effects and transitions, we get a much clearer picture of exactly how fast each of these cards actually is. Keep in mind that this is somewhat unrealistic at the moment since you would normally not have six 4k clips with only GPU accelerated effects, but this was the best way we found to show the maximum performance difference between these cards.

Before getting into specific results, there are a few overall things we want to point out. First, since this timeline was so heavy on GPU accelerated effects, the difference between the Z87 Haswell and the more powerful CPU in the X79 Ivy Bridge-E is much smaller than in our 1080p testing. The exception is with dual AMD FirePro graphics and dual NVIDIA GTX Titan configurations. For those configurations, the additional PCI-E lanes (which allow both cards to run at full x16 speeds rather than being limited to x8 speeds) on the X79 system allowed it to perform much better. Interestingly, the NVIDIA Quadro cards did not seem to care if they were running at x16 or x8 speeds. The exception to this is the FirePro W5000. For some reason, it performed much better on the Z87 system when two cards were installed. Combine this with the odd results we saw in the 1080p test and it makes us think that there is currently some driver or firmware issue with this card.

If you are working with this large and complex of video files, you likely have a bit more of a budget than the typical user. For that reason, we would recommend the AMD FirePro W7000 as an entry level card for this type of movie rendering. The NVIDIA Quadro K4000 is also a good choice, but the FirePro W7000 is both cheaper and slightly faster.

If you need the fastest performance possible, you can cut render times almost in half compared to the Quadro K4000 or FirePro W7000 by using dual NVIDIA Quadro K5000 or dual AMD FirePro W9000 cards, but you are certainly going to be paying a large amount of money for that additional performance. But if you work for Hollywood and are constantly waiting for large movies to render, the additional $2600 for dual Quadro K5000s or $6000 for dual FirePro W9000s might be completely worth it.

One thing we have very clearly learned in our testing is that choosing a video card for Premiere Pro, the choice is going to heavily depend on the type of files you are working with. There simply is no "best" video card for everyone since you will see diminishing returns or even hit a performance wall depending on the size and complexity of the timelines you are working with. If you are only applying a few effects to a 1080p file with simple transitions, a NVIDIA Quadro K2000 likely has more than enough power. If, however, you work with complex 4k video timelines with lots of effects and transitions, you may benefit from using one of the higher end video cards.

Most professionals will likely fall into an area where a NVIDIA Quadro K4000 or AMD FirePro W7000 will give them the best performance without hitting a performance cap. The nice thing is that if in the future you do need more power, our 4k encoding test shows that adding a second GPU scales very well with Premiere Pro CC. If you are purchasing a new system, a single more powerful GPU will almost always give you better performance at a slightly lower cost, but having an upgrade path available is always a good thing.