Adobe has a list of video cards that are compatible with the Mercury Playback Engine (MPE), but - as is often the case with compatibility lists - it is at times slightly outdated as new products are continuously being released. In fact, the official list does not include any of the current generation NVIDIA 600-series cards at the moment, yet if you look in the actual configuration file the GeForce GTX 680 and GeForce GT 650M are both listed. One thing to note is that even if Premiere is not able to use the GPU for MPE acceleration, it can always utilize software-level support. This allows all the effects that require MPE to still function, but you will not receive any of the performance advantages present by using a compatible video card.

Warning: Many of the cards we test below are not on Adobe's official list of compatible cards.  To use them will require that you manually edit your Premiere Pro CS6 configuration file.  While we did not see any problems in our testing with these 'incompatible' cards, technically these are unsupported configurations and our expectation is that Adobe Support would treat them as such if you ever needed their help.

A very important fact about the Mercury Playback Engine is that it exclusively uses CUDA on the Windows OS, which is a NVIDIA proprietary technology. Adobe has been adding OpenCL (and thus AMD) support on Mac OS, but has not yet done so on Windows. So for now, NVIDIA cards are the only ones that can take advantage of the huge performance gains available by using GPU acceleration in Premiere.

In this article, we want to explore the performance differences between a wide range of different video cards. In order to do so, we will be using the not-yet finalized Premiere Pro Benchmark (PPBM6) for Adobe Premiere CS6. While this benchmark is not yet released, our testing showed that it is very good at accurately showing the differences between video cards. This is basically a beta of the PPBM6 benchmark, so our results may not line up 100% with the final version. For the purpose of showing the performance difference between our test cards, however, we found that it does a terrific job.

Since some of the cards that we are testing are not natively supported by the Mercury Playback Engine, we will be editing the configuration file to allow us to enable MPE GPU acceleration. Full instructions for doing so can be found here. After making the edit for the cards that needed it, we ensured that MPE GPU acceleration was enabled then followed the benchmarking instructions for the PPMB6 benchmark. Since the disk test will not utilize the GPU very much, we will only be reporting on the MPEG2-DVD, H.264 and MPE results. For more information on each section, we recommend reading the background information for PPBM6. 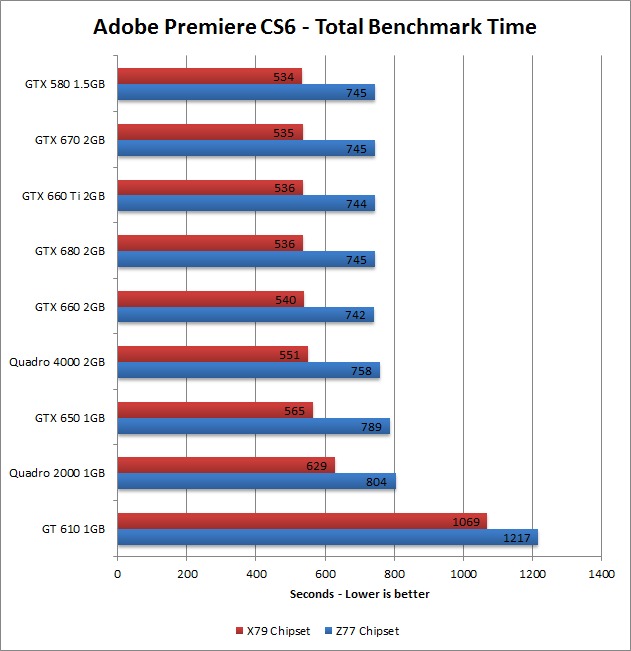 Totaling the time it took to complete the three sections of the benchmark gives us results that are strikingly similar to our Adobe Photoshop CS6 GPU Acceleration results. Namely that until you get to the GeForce GTX 650, the GTX line of cards all perform at nearly the same level. The GT 610 was at the bottom of our results by a pretty large margin, so we can say for sure that using a GTX 650/Quadro 2000 or above is certainly worth the monetary cost.

Sometimes these types of graphs can be hard to translate into real-world situations. To help with that, we also formatted the data in three other ways including the benchmark time compared to the fastest card and how many more/less minutes a one hour render/encode would take. To help give a sense of scale as to how much better using GPU acceleration is compared to using the CPUs only for rendering, we also included results with the MPE running in software mode (no GPU acceleration).

First of all, it is very, very clear that using a supported GPU makes a huge difference in terms of performance. While a GTX 650 1GB would add an extra 3.5 minutes to a one hour render/encode, and a GT 610 would add 40-60 minutes, using just software only would add roughly four additional hours. What this shows is that even if you are on the tightest budget, getting at least an NVIDIA GT 610 1GB is well worth the monetary cost.

If you would like to see the results for any individual test for either chipset, feel free to click on any of the thumbnails below. We left off the software only results since adding them would have completely removed any visual nuances between the results.

NVIDIA Quadro line may not be as fast as similarly priced GeForce cards, but what many do not realize is that Quadro cards are not primarily about speed. The main feature of Quadro is their double precision performance which allows the card to be many times more precise. As a roughly comparison, consider the difference you would get if you were to compute the area of a circle with pi being just 3.14 versus 3.14159. The difference is small, but it can easily compound over time. In addition, some of the higher end Quadro card (the 5000 and 6000) also use ECC memory for their video RAM which greatly increases reliability.

Most of the time, double precision computing is not really needed since there is nothing in the code that needs results that precise. So the question of GeForce vs. Quadro is really about whether or not the program is designed to need double precision from the GPU or not. In most situations, a GeForce card will likely work great for you. If you use some unusual GPU accelerated software that actually needs high double precision performance, however, you will definitely want a Quadro video card.

In the case of Premiere, it is really more about driver support than anything else. At the time of this article, Adobe has primarily certified only Quadro cards for GPU acceleration in Premiere. This may change in the future (and you can make GeForce cards work fairly easily), but for now if you want 100% support from Adobe for Premiere Pro CS6 you will want a Quadro card. If you are fine not being completely covered, however, a GeForce card is going to give you much more "bang for the buck".

If you decide that a GeForce card is suitable for your needs, the GeForce GTX 650 does a very reasonable job and is almost able to match the other GTX cards. Although if you did decide to go with a GTX 650, we would highly recommend using a 2GB version. For the best possible speeds, the GeForce GTX 660 Ti, GTX 670, GTX 680, and GTX 580 all have essentially identical performance, which makes the GTX 660 Ti a very strong candidate as it is much cheaper than the other cards. From a native support standpoint, the GTX 680 is a great choice simply because you do not need to manually edit any configuration files in order for MPE GPU acceleration to function.

One aspect that this type of benchmarking does not touch on is video RAM. If you are working with very high resolution stills or have a very complex timeline, you need a video card that has enough video RAM to keep everything in said vRAM or else the MPE acceleration is handed off to the CPU. The exact amount of vRAM needed is very difficult to determine ahead of time, but one formula from Adobe is available for amount of vRAM needed for still frames. This formula is (width x height)/16,384 megabytes. The example from Adobe in the post maximum dimensions in Adobe Premiere Pro CS5, CS5.5, and CS6 is:

This is not very intuitive, so for the majority of users the general consensus among professionals using Premiere is that you want a video card with at least 1.5GB of vRAM. Most cards today use RAM in increments of 1GB, so when shopping for a video card you want to look for one with at least 2GB of vRAM. Once you have that sorted out, you can make use of our benchmark results to determine which video card is right for you to use with Adobe Premiere Pro CS6.