Skip to content
Always look at the date when you read an article. Some of the content in this article is most likely out of date, as it was written on September 20, 2012. For newer information, see our more recent articles. 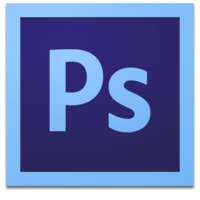 With Photoshop CS6, Adobe began integrating the Mercury Graphics Engine which uses the video card (via OpenCL and OpenGL) to vastly improve the performance of certain features. This is a great way to easily improve performance, but it adds more complexity to the question of "what hardware do I need" since the video card is now a bigger part of the performance equation. Adobe has a list of video cards that are compatible with Photoshop CS6, but as is often the case with compatibility lists, is often slightly outdated as new products are continuously being released.

So in this article we have two specific goals we want to accomplish: First, we will determine exactly how much of an effect the video card has on GPU accelerated features in Photoshop CS6. To do this, we will take a sample of the effects that Adobe says are GPU accelerated and benchmark them using various Intel, NVIDIA, and AMD graphics cards to see the performance differences between each card.

Second, since Adobe has not yet certified the NVIDIA 600 series or the Intel HD4000 graphics, we will use our benchmark results to determine if GPU acceleration is actually supported on those cards or not. If they are, this means that consumers who want an NVIDIA-based video card will not be limited to either a Quadro card or a card that is from the previous generation (NVIDIA 500 series).

To ensure consistent benchmark results, we created a series of "Actions" in Photoshop CS6 64-bit to apply the effects we selected from Adobe's list of GPU accelerated effects. Each effect was applied with its default options to a 12MB (38 megapixel) image. To actually measure how long each effect took to apply, we simply enabled the integrated "Timing" feature in Photoshop CS6 which displays how long Photoshop took to perform an action. This method was based off of HardwareHeaven.com's popular Photoshop Benchmark V3 benchmark, but adapted to specifically target GPU accelerated effects.

To ensure video acceleration was enabled, we made sure that the "Use Graphics Processor" was enabled under Edit -> Preferences -> General -> Performance before each round of testing. No other setup was required to enable acceleration for any of our test video cards. Note that many of these effects require that GPU acceleration is enabled, so even if you have a card that does not fully support OpenCL, this box must be checked in order for all of the effects to function properly. In order to show the importance of OpenCL support, we included the NVIDIA Quadro NVS 450 in our list of video cards since it does not support OpenCL. We fully expect this to result in a serious performance hit, but it will work well as a baseline to compare the other cards against.


To make sure that the chipset and CPU did not affect our results, we used two separate testing platforms consisting of the following hardware: 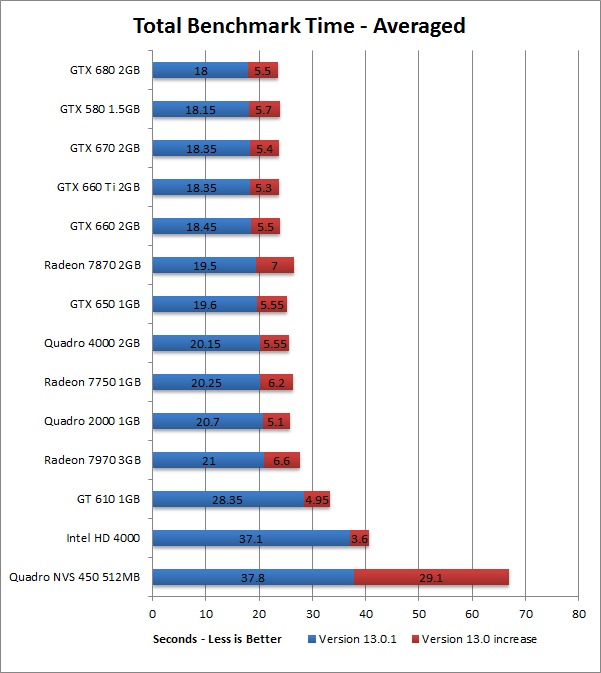 Totaling together the time it took for all of the effects to complete, then averaging the results from both chipsets (except the HD 4000 which was only available on the Z77 chipset) gives us a great summary of the results. One thing that is very easy to notice is that the 13.0.1 update improved GPU acceleration performance across the board by a very healthy amount. So if you use Photoshop CS6 and have not updated yet, we highly recommend doing so!

The NVIDIA Quadro NVS 450 is understandably the slowest performer since it does not support OpenCL, but you can see the massive increase in performance it received with the 13.0.1 update. Post-update, it is pretty close to the Intel HD 4000 graphics, which did a surprisingly decent job considering that it is integrated onto the CPU. However, even if you are on a very tight budget, the improvement gained by adding a cheap NVIDIA GT 610 1GB card is well worth the cost in our opinion.

The odd point in our benchmarks is the AMD Radeon HD 7970. Strangely, it did worse than the AMD Radeon HD 7750 and Radeon HD 7870 even though it is technically a much more powerful card. We have no idea why this is, but to be sure we did not have erroneous results we actually ended up running many of our benchmarks dozens of times just to be 100% sure of our results. Each time, the results were the same even after reinstalling the video driver and even reinstalling the main OS.

If you would like to see the individual benchmark times for each effect, feel free to click on any of the thumbnails below for a closer look.

From our testing, we can now confidently state that even though the NVIDIA 600-series and Intel HD 4000 graphics are not on Adobe's compatibility list, GPU acceleration in Photoshop CS6 works great on those cards. So, contrary to the compatibility list, there is no reason to use an older generation NVIDIA GTX 580 since the current generation NVIDIA cards performs as well or better. 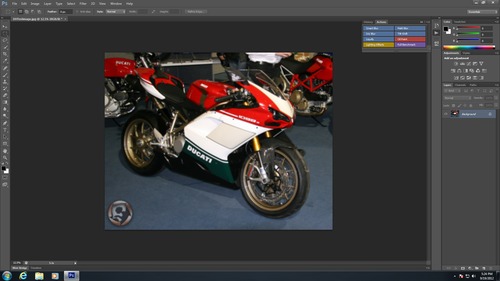 Update 2/5/2013: If you are interested in optimizing your system for Photoshop CS6, check out our Photoshop CS6 Memory Optimization article!