Computers transmit data using packets which in addition to the raw data contain information including the source, the destination, protocol information, packet number, footer, and error correction data. Depending on the protocol type, this information can take up to 20% of the total packet size, resulting in roughly 80% data efficiency. So even if the wireless network is running at 300 Mbps, already the actual data transfer speed is closer to 240 Mbps. In addition to the sending and receiving of these data packets, there are also small "acknowledgement" packets that are sent to confirm that the data was transmitted successfully. These are not very large, but do slightly reduce the data transfer speeds. Lastly, all wireless devices send out a constant stream of "query" packets for basic network information including what networks are available, what the signal strength is, and what protocols are being used. Again, these packets are small, but very quickly add up.

In addition to the packet structure, the speed of your hardware, signal strength, and interference play a major role in the actual speed you should expect from a wireless network.

Signal strength is simply how strong of a signal there is between your computer and your wireless access point. This can be affected by many things, but mostly by distance and physical objects such as walls. You can find the signal strength in Windows by a variety of different methods. The first method is to simply click on the Network icon in the taskbar which brings up a list of the available wireless networks and their approximate signal strength. To get a more accurate reading of the signal strength, simply run the command "netsh wlan show networks mode=Bssid" from a command line. This will output all the information Windows knows about the various wireless networks in range including the maximum speed and signal strength.

Both of these methods do a decent job, but to get a very accurate look at signal strength, we recommend using a third part utility such as NetSurveyor. These programs are great for showing exactly what is going on with both your wireless network and other networks in your area.


The final impact on wireless speed is the amount of interference found in the area. This can be from a wide variety of sources including other wireless networks, cordless phones, baby monitors, Bluetooth devices, and even microwaves. Interference mostly comes into play in congested areas such as apartment complexes or college dorms where there are a large number of wireless networks operating at once. Beyond removing the devices causing the interference, the only way to lessen the effects of interference is to either change the channel your wireless devices operate on (which slightly alters the frequency being used) or to use a completely different frequency range. 2.4 GHz is the most commonly used frequency for wireless networks (which is why interference is sometimes a problem) but many newer devices can also operate at 5 GHz. Note that both your computer and wireless access point need to support operating at the 5 GHz frequency range in order to communicate with each other.

Signal strength and interference levels affect your wireless speed because they cause the wireless signal to be corrupted to the point that the receiving device can no longer read the data. When this happens, the sending device has to keep resending the same data over and over again until the receiving device is able to successfully read the data. Depending on how bad the signal strength and interference is, this can slow wireless transfer speeds to a crawl.

To show how much signal strength and interference affects a wireless network; we ran a network performance benchmark (LAN Speed Test) over a 24 hour period using both the 2.4 GHz and 5 GHz frequencies at two different distances. While our office naturally has plenty of computers running, nearly all of them are shut down at night which will provide us with an environment that has both high and low levels of ambient interference. 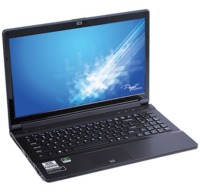 Our testing was done using the 802.11n protocol with three MIMO streams giving us a maximum advertised speed of 216.6 Mbps at 2.4 GHz and 300 Mbps at 5 GHz. In order to reduce the number of variables in our testing, the network was configured without any encryption. We ran our testing from a distance of 10 ft. with a clear line of sight as well as from 65 ft. away (from one corner of the first floor of our office to the opposite corner on the second floor). This 65 ft. test goes through the ceiling/floor and at least 3 walls so it will be a very good indication of how both distance and physical obstacles affect wireless speeds. Here is a breakdown of the distances, obstacles, and resultant wireless signal strength:

To report our findings, we graphed the results in two different ways. The first graph is simply a the raw speeds we saw over the 24 hour testing period. This results in quite a few spikes and dips in the results so in order to clear that out we applied a trendline in Excel using a 10 period moving average and saved the data to a second graph. Since we are very interested in how much interference affects transfer speeds, we also overlaid a graphic showing the number of employees that were present in the office during our testing period. This is not a perfect indication of interference levels since some employees have more devices running then others, but it at least gives us a general idea of interference levels.


Starting with the 2.4 GHz network, our results are very interesting. At only 10 feet away with a clear line of sight, we had an average write speed of about 66 Mbps (blue line) and a read speed of about 94 Mbps (red line). Remember that our advertised speed should be 216.6 Mbps, which we are clearly well short of. What is nice to see from the graphs is that the results were fairly consistent throughout the entire 24 hour testing period.

Our results at 65 feet through multiple walls, however, showed a huge fluctuation in read and write speeds. On average, we saw a write speed of about 17 Mbps (green line) and a read speed of about 63 Mbps (orange line). Over the course of our testing period we saw as much as a 50% drop in performance as the number of employees plateaued around 1pm. These are very intriguing results, and show very clearly how much both signal strength (as shown by the speeds around midnight) and interference (as shown by the speeds around 1pm) impacts wireless performance.

For our 5 GHz testing, we again saw the same spikes in performance, but oddly the spikes were much less pronounced at the longer 65 foot distance. At 10 feet with a clear line of sight, we had an average write speed of about 118 Mbps (blue line) and a read speed of about 122 Mbps (red line) which is significantly better than our results with the 2.4 GHz network, but still short of the advertised 300 Mbps.

As expected, the speeds were much lower at the longer 65 foot distance with an average write speed of about 19 Mbps (green line) and a read speed of about 60 Mbps (orange line). By some fluke, these speeds end up being almost identical to the overall average speed of the 2.4 GHz network at 65 feet. What is really interesting to see is that even at the long 65 foot distance, there was very little fluctuation in the results over the entire 24 hour period. This very clearly shows how much less interference there is when using a 5 GHz wireless network.

From these results, it is clear that even under the most ideal circumstances you will never see speeds matching the advertised 216.6 Mbps or 300 Mbps. To give us one final point of view of our results, we graphed our overall average results and calculated the percentage difference between our measured results and the advertised speeds. Note that this is the overall average, so the results from the 2.4 GHz network at 65 feet are a bit skewed due to the amount of variance over the 24 hour testing period. 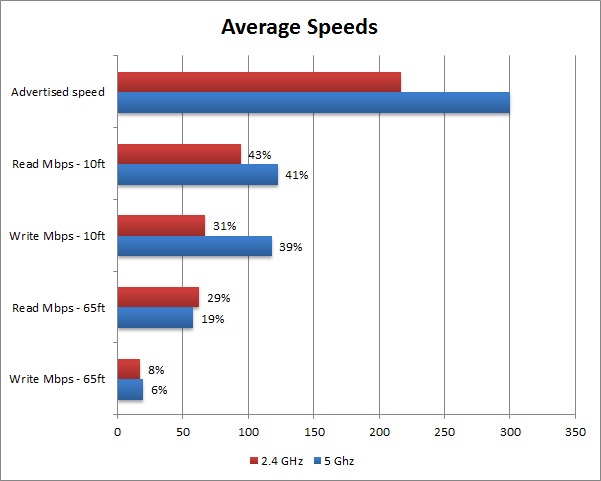 So what can we conclude from our testing? It is almost impossible to estimate the speeds you should expect to see in the real world due to all the variables, but we can pretty confidently say that you should never expect to see speeds much greater than 40% of the advertised network speed. As the distance and interference levels rise, this can easily be reduced to as low as 10% of the advertised speeds. Also, 5 GHz networks are indeed faster than 2.4 GHz networks, but have a greater drop off in performance over longer distances. Lastly, 2.4 Ghz networks are much more susceptible to interference than a 5 GHz network so if you are in a heavily populated area, a 5 GHz network is probably a better choice than a 2.4 GHz network.