Photoshop doesn't scale particularly well with high core count CPUs, which is why we typically would recommended a quad core CPU like the Core i7 7700K for most Photoshop users. However, even though Intel's new 8th Gen CPUs do sport an additional two cores across all the new models, the clock speeds have not been significantly reduced and the Turbo Boost 2.0 speeds are actually a bit higher! Because of this, it is very likely that we will finally be able to recommend a CPU with more than four cores for Photoshop.

While Intel is releasing a number of "Coffee Lake" 8th Generation CPUs, in this article we are primarily going to focus on the Core i7 8700K, Core i5 8600K, and Core i3 8350K to see how they perform in Photoshop. If you wish to read one of our other Coffee Lake articles to see how they perform in applications like Premiere Pro, Lightroom, and After Effects, you can view a full list here.

To see how these new CPUs perform, we tested how long it took to complete a wide range of tasks in Photoshop including:

To act as additional comparison points, we will also be including four Skylake-X CPUs on the X299 platform and two Ryzen CPUs on the X370 platform. The Ryzen CPUs are an obvious comparison we wanted to make since they are the direct competitors from AMD. The Skylake-X CPUs, on the other hand, are not really competitors but since Photoshop is often used in a secondary role in a wide range of professions we decided to include them as well.

On thing we want to note is that we are technically overclocking the Ryzen platform by using DDR4-2666 memory since we are using four sticks of dual rank RAM. According to this blog post – which we have confirmation from AMD that it is still accurate even with the new AGESA BIOS – the highest RAM speed that is officially supported with our four sticks of dual rank RAM is just DDR4-1866. Our previous Ryzen testing was performed with DDR4-2400 RAM, but even then we received a lot of comments about how we were artificially limiting the performance of Ryzen even though we were actually overclocking the platform. As you will see in the results, however, using DDR4-2666 RAM doesn't really make AMD better than Intel so we opted to go ahead and use the faster RAM. We're sure some will say we should use even faster DDR4-3200 RAM, but there is a limit to what we are willing to use considering our testing is first and foremost to ensure that we are offering the right hardware to our customers. Since DDR4-3200 is well beyond what we consider to be acceptably stable for most end-users, it is extremely unlikely to be a part of our testing in the near future. 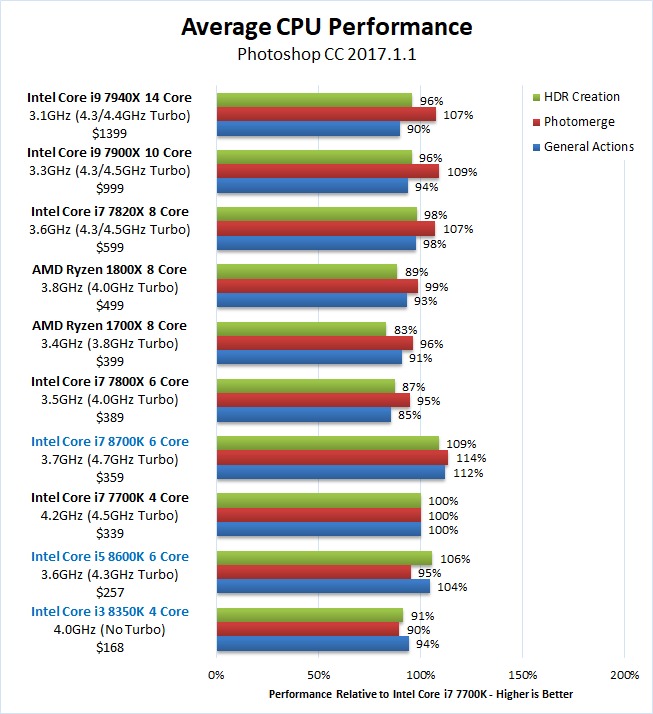 Photoshop isn't the best at using a lot of CPU cores, so it is no surprise that the new Coffee Lake 8th Gen CPUs are not massively faster than the previous generation. The Core i7 8700K is still a very decent 9-14% faster than the Core i7 7700K, but it isn't 50% faster as some might have expected from the 50% increase in core count. Both Intel and AMD are simply hitting a wall of how fast they can make an individual CPU core run and while more cores can help, many applications are not optimized to use more than a handful of cores. Luckily, Photoshop is able to utilize the increased core count of these CPUs to at least some degree so we are still able to see a respectable increase in performance.

While a 9-14% performance increase may not seem terribly exciting, this is actually a bit more of a gain than we've come to expect from a new CPU line. In fact, this easily makes the Core i7 8700K the fastest CPU currently available for Photoshop in every task we tested. In the past, the Core i7 7700K was our go-to recommendation even though doing a photomerge (panorama) was actually faster on some of the Intel X-series CPUs. Thanks in large part to the increases core count, we can now positively state that the Core i7-8700K is the best CPU you can buy for Photoshop regardless of your workflow.