We now have our quad Opteron test-bench system up and running so I decided to continue testing with Zemax OpticStudio and run some parallel scaling and performance analysis using this new system and our quad Xeon test system. I’ve done some curve fitting to the Amdahl’s Law equation using the measured parallel performance on the two systems. With this analysis it’s possible to do some speculative performance estimates for processors at different clock speeds and core counts. Be sure to read the caveats section at the end of the post!

Amdahl’s Law basically says that speedup of a parallel code is limited by the sequential fraction. For example a program that runs in one time unit and spends ½ of it’s time in in a sequential code segment and ½ of it’s time in code that can be run in parallel, the speed up of the program can never be greater than a factor of 2 no matter how many parallel processes are used. A code that spends 99% of it’s runtime in parallel will never exceed a speedup of over 100. The following equation shows this relationship in terms of the parallel fraction;

S(n) is the speedup for n parallel processes and P is the “parallel fraction”, T is time.

We can use measured performance of OpticStudio’s standard benchmark using n processes and then do a non-linear least squares curve fit to the equation above to determine the effective parallel fraction (P) and then use this curve to predict performance at different processor clock speeds.

The following two plots show the measured speedup of OpticStudio using from 1 to 40 processes for the Xeon system and 1 to 48 processes for the Opteron system. The brown line is what the performance would be if there was perfect scaling, i.e. linear scaling. The green(AMD) blue(Intel) lines are the Amdahl’s law curve fits. 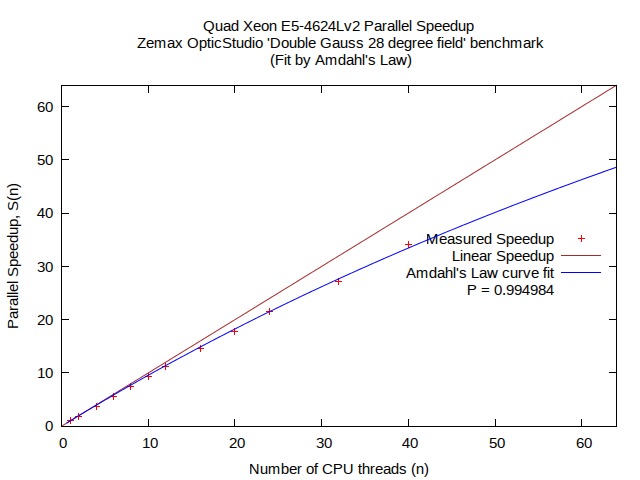 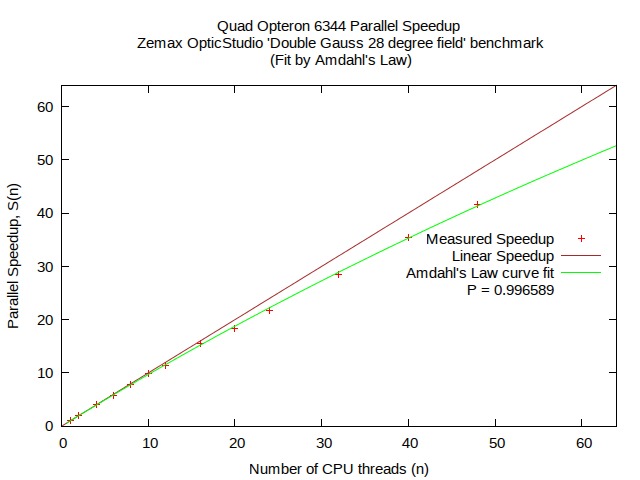 The effective parallel fraction P determined from the curve fitting is as follows;

Now, to show the data in terms of the of the actual performance metric, namely, “millions of ray surfaces per second”, we observe that in Amdahl’s law, time is inversely proportional to the amount of work (W) done. Thus,

The following plots show the work done with n threads and the fit of the equation above. 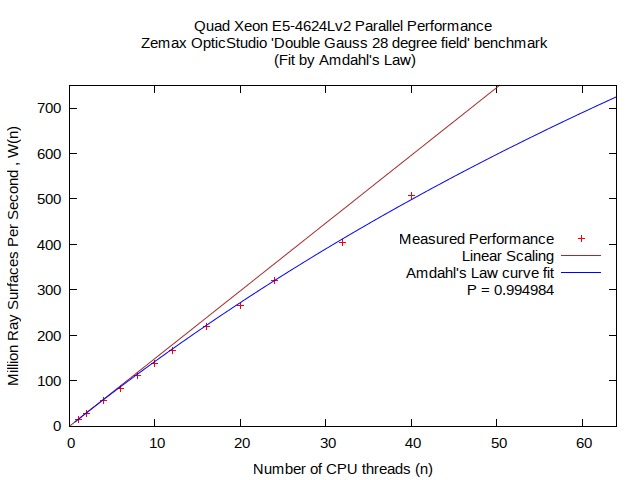 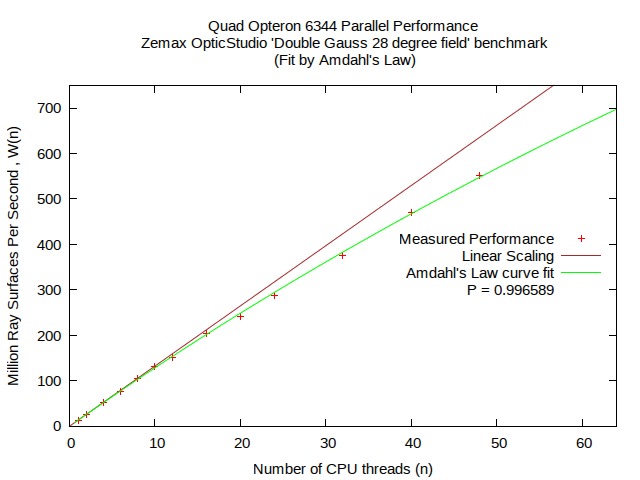 The table below lists most of the currently available quad socket Xeon and Opteron CPU's and their predicted performance on this benchmark. Enjoy!

The prices for these processors varies quite a bit … We’ll leave performance per dollar as an exercise for the reader :-)