My Impressions of Windows 10 Technical Preview

The Ford Mustang, Apple's iPhone and pretty much any Harley Davidson bike are a few products whose design is debated and aggressively deliberated among fans. Even the slightest design or spec change can send fans running for social media to discuss and debate. It's dangerous business messing with a classic.

When you tell people your favorite Mustang is the '65 Fastback, you're drawing a line in the sand between the classic and the new. You stand for something and can defend your position. In fact, you probably search for opportunities to defend your choice.

Since the release of Windows 8, I'm wondering if Microsoft is in a similar quandary with Windows. I can't think of a single product that more people stare at, for more hours each day. Everyone has an opinion about what Windows should look like, and if our customers at Puget Systems are any reflection of the larger market, you feel Windows should look like Windows 7. About 70% of the PCs we build, go out the door with Windows 7 installed, and that number has remained fairly consistent since Windows 8 was released over two years ago.

I recently upgraded my main PC from Windows 8 to the Technical Preview (build 10049) of Windows 10, and it appears that Microsoft has learned that its biggest fans prefer the traditional desktop motif. Vista was full of colorful and sometimes annoying animations while Windows 8 often felt like a mobile phone OS crammed in to a desktop PC. All of that is gone with Windows 10.

For you die-hard Windows 7 fans, I have good news: Windows 10 is a solid upgrade from Windows 7 or Windows 8. The best way I can describe it would be to say it feels like a modern take on Windows 7. Important settings can be found in one place. The animations are elegant without becoming vexatious over time. Even the system icons receive a well-deserved makeover. In short, it feels like the Windows team listened to customers and sweat the details this time around.

Windows 10 boots into the familiar desktop environment, and just feels smarter by morphing into fit whatever device you're using be it desktop, laptop, touch screen or no touch screen. The awkward jumping between Windows 8 apps and the desktop using the Windows key is gone as are Charms. In short, I believe Microsoft listened to Windows 8 complaints and made an effort to address them in Windows 10. 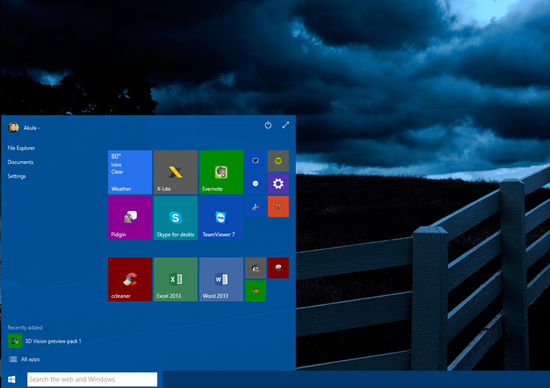 Although it's been stable for the past few weeks, there are a few rough edges for Microsoft to improve before its release such as the integration of Cortana (Microsoft's voice assistant) and BING search. The potential is there, but the presentation could use some polish.

We don't have a firm date of when we'll be offering custom PCs with Windows 10. We expect Microsoft will announce a release date during their Build Conference at the end of this month. Microsoft EVP of Operating Systems, Terry Myerson said we can expect Windows 10 sometime "in the summer". I normally take such comments with a grain of salt, but Windows 10 is solid enough today that I believe Myerson when he says we'll see it this summer.

As the release date approaches we'll be talking more about Windows 10. But I wanted to provide you a quick preview of my impressions so far. I feel confident in saying that Microsoft has a winner on its hands with Windows 10.