Peltier cooling has been around for over a hundred years, but has only recently become available to the masses for use in computers. CoolIT is one of the few CPU cooler manufacturers to sell CPU cooling solutions featuring peltier technology. With all the theoretical benefits of using peltiers, we wanted to test CoolIT coolers against our two most popular CPU coolers. We ordered in three of CoolIT's closed-loop liquid coolers; Pure (does not feature peltiers), Eliminator (three peltiers), and Freezone (six peltiers) to determine if peltier cooling is useful in today's computers. 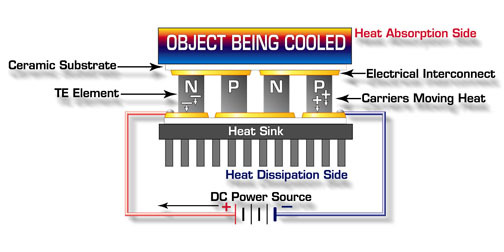 But first, a brief explanation of what a exactly what a peltier is: A peltier uses a TEC (thermo-electric cooler) to act like a "heatpump" to draw heat away from the object it is cooling. They work by applying a voltage across a thermocouple, which causes a temperature difference. More information on peltier coolers can be found here. By using a powerful enough peltier cooler, you can achieve below-ambient temperatures on the object you are cooling.

However, there are a few drawbacks. First, peltier coolers are fairly expensive. CoolIT's cheapest cooler to offer peltiers retails for about $160. Second, they require quite a bit of power. A single peltier cooler used by CoolIT can draw up to 15watts. With their high-end cooler using 6 peltiers, the cooler needs more than 80watts of power. Thats almost as much power draw as the CPU they are cooling. Third, peltiers actually add heat to your system. That 15watts of power has to go somewhere, and it is converted into heat. The exciting thing about the CoolIT coolers is that by putting the peltiers right by the exhaust fan for the system, that additional heat does not affect your computer hardware, because it is immediately vented out the back of the computer.

Lastly, I need to caution that using peltier coolers can actually be dangerous for your computer hardware. Any time you are working with below-ambient temperatures, you have to worry about condensation -- just like a glass of cold water on a hot day. When we left the two coolers featuring peltiers running on a bench, the coolers accumulated condensation after about 20 minutes. While the heat from a CPU would prevent this from happening (the heat would not allow these coolers to operate at such a low temperature), a system that does not POST properly can potentially allow condensation to happen. When a system does not POST, the CPU is usually not being given very much voltage, which means it will not be providing any heat. This would allow the cooler to eventually get below the ambient temperature. After a few minutes, condensation can form on the cooler and drip onto your components, causing sparks to fly!

All testing was done with the following hardware. The fan configurations in the case were changed slightly for each CPU Cooler to maximize its cooling ability.


A few of the graphs show a large spike in System temperature at the beginning of the graph. That was artificially added so that the scale of each graph would be the same.

All temperatures reported in Celsius

This graph is a close-up of only the CPU temperatures. The first thing to note is that the CoolIT Pure actually performed worse than a Freezer 7 in its default configuration. Turning the fan into an intake like we do with the Hydro CL1 helps immensely. In that configuration, the Pure does out-perform the Hydro CL1, but only by a few degrees. The Eliminator cooler performs almost identically to the Pure when configured as an intake. The CoolIT Freezone is the only cooler to really outperform either the Hydro CL1 or the Freezer 7. Under load, the Freezone lowered the CPU temperatures by about 17 degrees compared to the Freezer 7.

To be honest, we were expecting more out of coolers using peltier technology. Puget Systems has always focused on quiet solutions, which does not appear to be CoolIT's primary focus. So while the 17 degree performance increase from the CoolIT Freezone is impressive, the price and noise level makes it somewhat less practical.

Of all the CoolIT coolers we tested, the Freezone is the only we would consider. This cooler could work well for those who want the performance of liquid cooling at a lower cost (and with less maintenance), as long as noise is not an issue.