Skip to content
Always look at the date when you read an article. Some of the content in this article is most likely out of date, as it was written on October 17, 2008. For newer information, see our more recent articles. 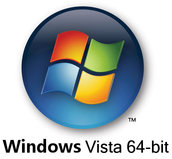 One of the things we get asked about a lot here at Puget is 64-bit Windows, and more specifically these days 64-bit Vista. Picking an operating system is something that each of our customers gets to do, and while some opt for Linux or have a copy of Windows they are going to install by themselves the vast majority pick from the currently-available crop of Windows versions. That means 32-bit Windows XP (at least until the end of 2008), 32-bit Vista , or 64-bit Vista editions. 32-bit is still generally considered the norm, but in the last few months we have seen a dramatic increase in folks asking about 64-bit; because of this, and the general confusion about the differences between these versions, it was apparent that an article on the subject might be helpful to both our existing and prospective customers.

The main thing that seems to be driving interest in 64-bit Windows is the increased memory limit it offers. In 32-bit Windows (either XP or Vista) there is a theoretical limit of 4GB of RAM – though in practice it is usually around 3GB, and can be more or less than that depending on the other hardware in the system. I’ve even seen systems where 4GB were installed, but Windows could only use 2GB; those drastic cases are often related to a video card or cards with large amounts of onboard memory. In contrast, 64-bit Windows has a much higher limitation: 16GB for Vista Home Premium, and at least 128GB (maybe higher) for Vista Business and Ultimate. The 16GB limitation in Home Premium seems to be an entirely arbitrary decision by Microsoft, similar to how dual-CPU computers (not dual-core, but actual two processor systems) require the Business or Ultimate edition to function fully.

As memory has become cheaper over the last few years, and as people run more demanding programs and a larger number of applications at the same time, the need for more than 4GB of system memory has become apparent. Microsoft has been working on this in their OS development for some time, and AMD laid the original groundwork with their “AMD64” processor advancements that debuted in the Athlon64 and Opteron lineup. Intel has followed suit with “EM64T” instructions for its CPUs, and now basically all desktop-class processors sold are 64-bit compatible. Newer motherboards and chipsets also tend to support 8GB or more of main memory, so on the hardware side the ‘perfect storm’ has arrived in which 64-bit software can flourish.

When running a 64-bit version of Windows, one also has access to 64-bit software titles. Right now I don’t know of any programs that are exclusively 64-bit, but several games and applications have been released over the last couple of years with versions compiled specifically for the 64-bit platform. The latest of these is Photoshop CS4, and the added performance and memory capabilities it brings to the table should be exciting to any digital photographer. There are also 64-bit versions of many 3D design applications, like Maya and AutoCAD, so I try to check with professional customers to see if they are planning on taking advantage of any of those when helping them configure a computer.

So, given all of that, why would anyone stick with 32-bit Windows? Well, there are some who want or need to stay with Windows XP – and while there is a 64-bit version of XP it is not as polished as 64-bit Vista, and is likely to have a lot of the same compatibility problems that make XP customers hesitant to move to Vista. Even among those who are ready and willing to get a new computer with Microsoft’s latest operating system, there can be legitimate reasons to avoid 64-bit. Primary among those is driver compatibility with older peripherals: in short, any component in a 64-bit computer or connected to one has to have a 64-bit driver available or it will not function. All of the hardware we’ve been selling in our computers has been 64-bit compatible for well over a year, but many peripheral manufacturers are behind the times. This is getting a lot better, but I still advise my customers to check with the maker of any printers, scanners, drawing tablets, etc that they use to ensure they will still work under 64-bit Windows. I know from my own research that HP has released a lot of 64-bit drivers for their printers since Vista came out, and many other large companies like that are also pretty up-to-date – but I suspect that smaller manufacturers making specialized hardware may not have the manpower to develop both 32-bit and 64-bit drivers for their products.

It is also worth noting that some software will not work properly in a 64-bit operating system. Microsoft went to great lengths to make 64-bit Windows emulate a 32-bit environment for older software, in a similar fashion to how 32-bit Windows can run 16-bit software (which, by the way, won’t work at all in 64-bit Windows). Because it is not native, though, some applications will have trouble – especially those that need “deeper” access to the system’s core, or kernel. Anti-virus applications almost always run into this issue, and for that reason there are many 64-bit native versions of AV programs. On the other hand, though, viruses are also mostly 32-bit – so simply having a 64-bit operating system can afford some additional protection.

For folks who don’t have peripherals or software holding them back, though, I really think 64-bit Vista is the best choice. It is definitely the way to go if you want future upgradability, and I would go so far as to say that Microsoft should phase out 32-bit Vista shortly after they drop XP. It probably won’t happen, though, and there is even a good chance that Windows 7 will come out in both 32 and 64-bit versions as well. Just because the choice is there, though, doesn’t mean it has to be a hard one to make: when in doubt, go 64-bit!