Here at Puget Systems, specifically in the Labs department, most of the content that we write falls into one of two categories: either long, fairly in-depth articles looking at the performance of various PC components in a given application or recommended system pages, with multiple configuration options aimed at different budgets and lots of supporting data drawn from the aforementioned articles. For some readers all of that is information overload, though, and they just want a quick question answered: what is the best computer for my needs? We’re going to do our best to answer that question in a series of short, frequently updated articles like this.

Today we are looking at V-Ray from Chaos Group, a rendering engine with modes for using either the CPU or video card (GPU) in a workstation - or both! In the past we split these different modes out into separate articles, but this time we are going to keep them all in one place and just address each one in turn. Please note that technology is constantly changing, so this may become outdated quickly. 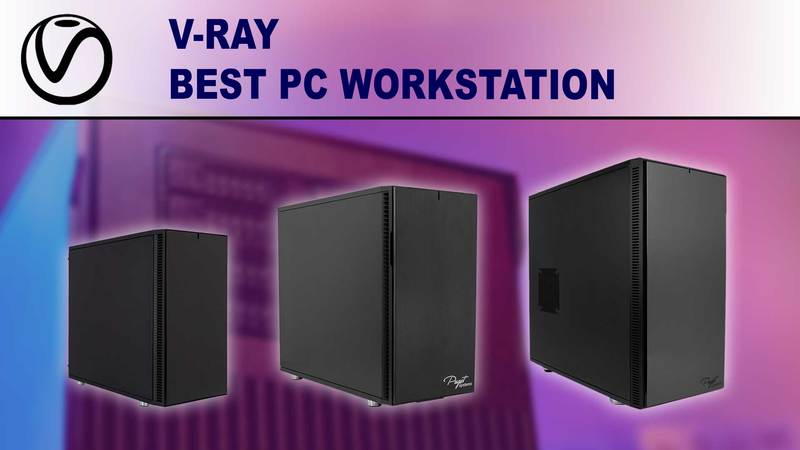 We'll start off with the CPU side of V-Ray, which scales very well across multiple threads. The highest core count CPU we have available today is AMD's Threadripper 3990X, with 64 cores and supporting 128 threads via SMT. You could potentially go higher with dual or even quad Xeons, but they are slower per-core and vastly more expensive - to the point where you'd get better results for your money by having multiple Threadripper based systems doing network processing rather than one big Xeon machine. Regardless of the CPU, plenty of system memory will be important for holding all of the geometry and texture data; the amount you need will depend on the complexity of your scenes, so it could be less or potentially even more than the 128GB we've selected here. It is also good to have both fast storage for the OS, applications, and current project files as well as additional storage space for finished projects, backups, and whatnot.

On the flip side, the pure GPU mode in V-Ray doesn't care about the CPU's performance - but instead wants powerful video cards, and lots of them. The absolute best option would be NVIDIA's RTX A6000 48GB monster... if it was available. Sadly, while it has been announced it is not yet readily available for purchase - so until that changes, we'll have to make do with the more consumer-focused GeForce RTX 3090 24GB. It only has half the VRAM of the A6000, and due to very high power usage it is effectively limited to three cards in a system - while in the past we've often been able to stack four GPUs per workstation - but it is fast enough that three of the 3090s will outpace four of any previous-gen card by a fairly wide margin.

In order to have enough PCI-Express slots for three cards, we still have to be on a fairly high-end CPU platform. Here, Intel's Xeon series will do quite nicely since there are more affordable options than the Threadripper line has available, while still supporting a lot of PCIe lanes. We will still want a fair amount of system memory too, and both a fast main drive and plenty of storage for finished projects.

Maxing-out performance in V-Ray can be accomplished by combining the best hardware for both the CPU and GPUs, as the GPU mode in this rendering engine can emulate GPU-style rendering on the CPU for an added boost. That means combining the top-end Threadripper with three NVIDIA GeForce RTX 3090 video cards, and adding some more system memory to be safe. Other specs can stay the same.

It is worth noting that the best combination might change in the near future, when NVIDIA's RTX A6000 reaches the public. If it turns out that four of those can be used in a single system without exceeding power limits of high-end PSUs and standard electrical circuits, then it is possible that a platform other than Threadripper might end up being a better choice to go with them. Most Threadripper boards are not able to handle four video cards, and moreover the Threadripper chips themselves draw a lot of power which would have to be factored in if all the components would be under extreme load for extended periods of time. We plan to revisit that in the future when the RTX A6000 becomes available.

That is the most powerful traditional, tower workstation that we can build for V-Ray Next GPU right now, but there are other ways to move beyond even this powerhouse of a PC. For example, if this were going to be a server-style system that was accessed remotely, you could go with a rackmount chassis and potentially fit more than four video cards. V-Ray also supports distributed network rendering, so you could split out processing across several systems in either an office or server farm.

If you want to know more about V-Ray performance, we have published several articles over the years looking at how individual CPUs and GPUs compare as well as how well this software scales across multiple cards. And if you aren’t sure what you need, or if your workflow includes multiple applications, please feel free to call or email our consultants to get a more personalized configuration.