Intel 12th Gen - How do P-Cores and E-Cores Compare

Written on January 27, 2022 by Kelly Shipman
Share:
Table of Contents

For well over a decade, each new consumer CPU generation focused on faster and faster CPU cores, while retaining the Quad-core design. AMD recently changed the CPU landscape by introducing consumer-grade CPUs with higher core counts, pushing all the way to 16 cores. In response, Intel has slowly been increasing the core count on their Core series of CPUs but has not scaled beyond 10 cores in the i9 10900K (before dropping back down to 8 cores in the following generation). 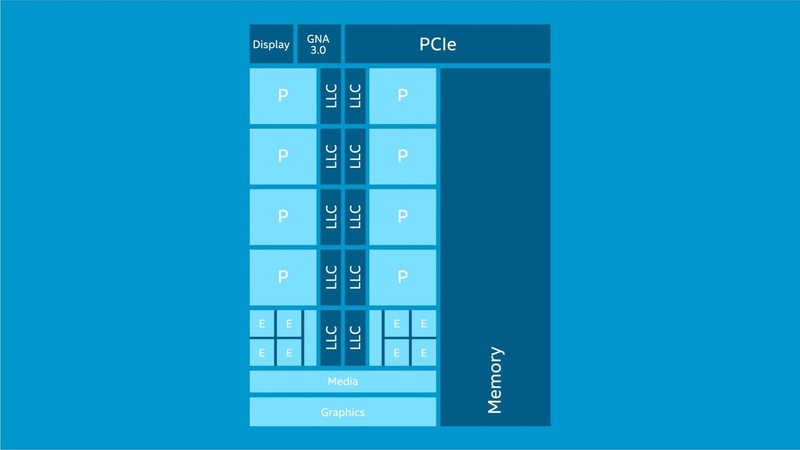 With the introduction of Intel’s 12th generation CPU, code-named Alder Lake, they moved to a new hybrid architecture, combining CPU cores of varying sizes, dubbed Performance-cores, or P-cores, and Efficient-cores, or E-cores. P-cores are the traditional design that we’re used to, featuring high clock speeds and Hyper-Threading. The E-cores are physically smaller than P-cores and consume much less power. The trade-off is that they are much slower and don’t offer Hyper-Threading.

So exactly how fast or slow are these cores? And why did Intel choose to add slower cores instead of more fast cores? For the purpose of this article, we won’t go into all the paper specs on each of these cores. For that, you can reference our product page as well as our performance articles. Instead, we’ll look at how each type of core performs in real-world applications, and how the performance scales based on the number of each type of core in use. This will allow us to estimate the performance of various combinations of P and E-cores. 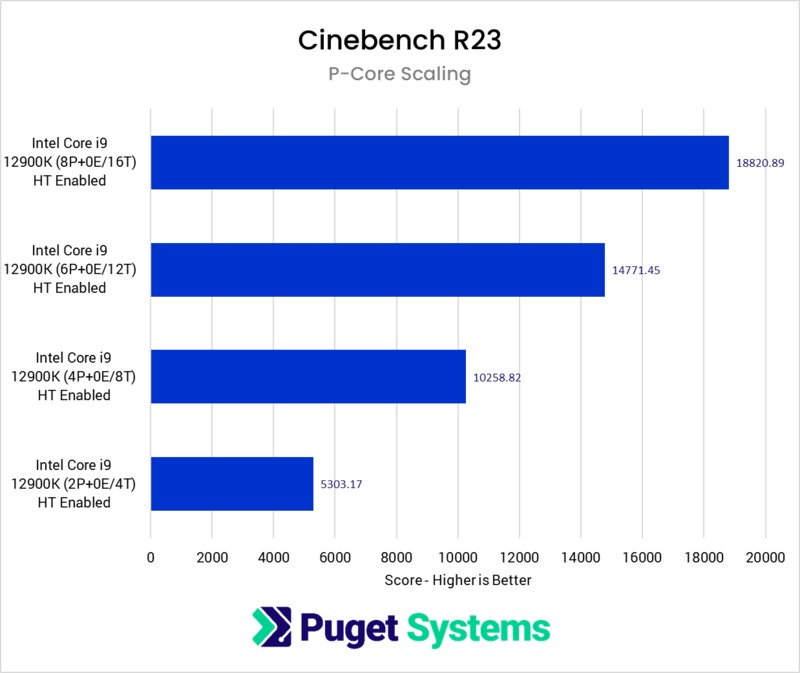 First, we’ll look at the P-Core performance, as that is the style of core we normally see. Plotting the performance of 2, 4, 6, and 8 cores we see a fairly reliable scaling happening. It is not perfectly straight, likely due to the fact that as more cores come into play, the CPU needs to balance energy draw and heat with how fast each core runs. With virtually all CPU families, as the number of cores grows, the clock speed that all cores can run at the same time lowers. For the purpose of this article, we aren’t trying to be super precise, so the data we see here is enough for us to be able to estimate how additional P-core would behave. 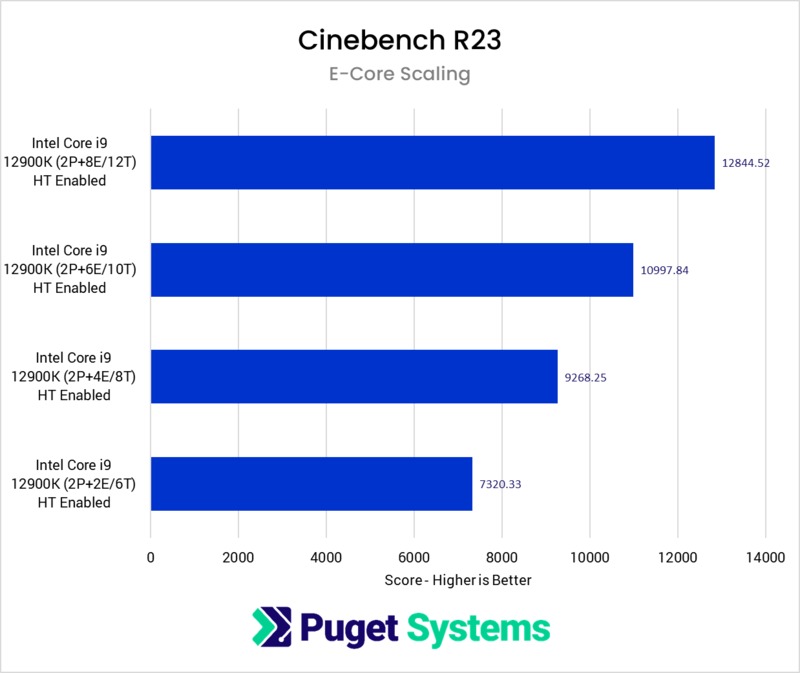 The new Efficient-cores have one caveat to the testing. The motherboard BIOS we used would not allow all P-cores to be disabled. It would show them as disabled, but upon resetting the system, the BIOS would reload the last good configuration. There is likely some instruction set that requires a P-core the be active to control the handoff between cores, or some other technical reason for this requirement. We decided to leave two P-cores enabled, as it would still let us see how adding more E-cores would scale, we just won’t have an exact comparison with no P-cores involved. Once again, the data gives us a pretty linear scaling, adding roughly 2000 points for each pair of E-core added.

Now that we have exact data on how these cores perform, we can begin to compare them, as well as estimate how different configurations of P and E cores would perform. According to Intel’s diagrams, four E-Cores are roughly the same size as one P-Core. We can put these into “blocks”, with the 12900K having 10 available blocks. The default configuration has 8 blocks dedicated to P-cores, meaning 8 cores and 16 threads, and two blocks dedicated to E-Cores, for another 8 cores. 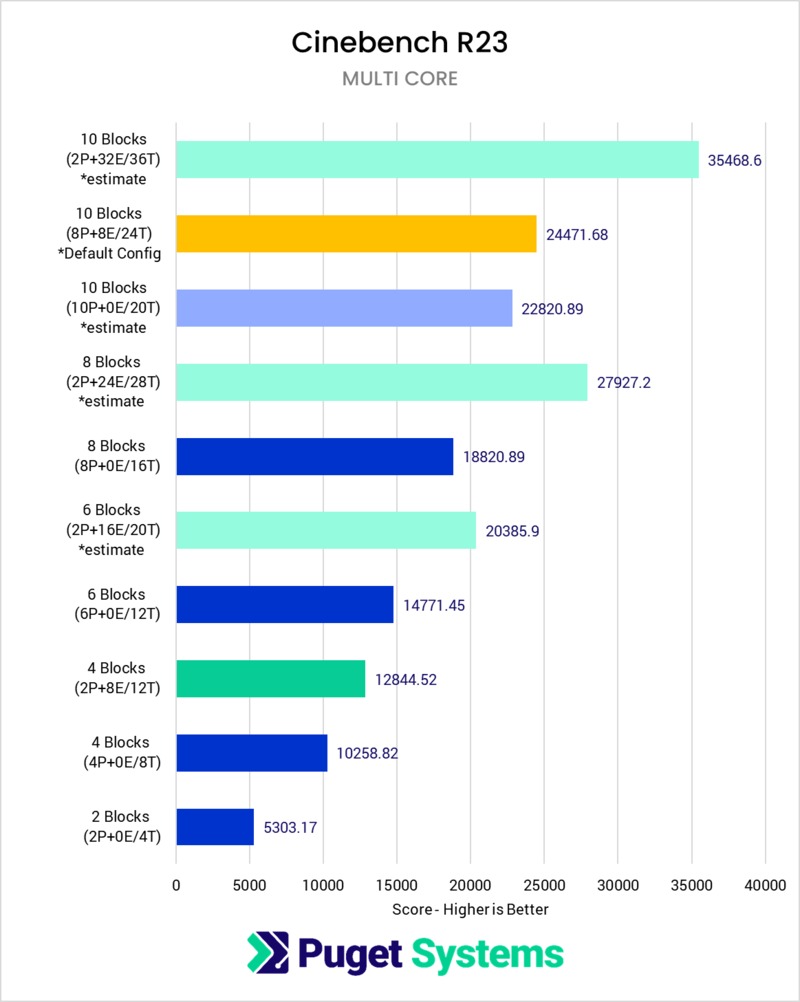 From our estimates, this configuration is faster for rendering than if Intel had used all 10 blocks for P-Cores. On the other hand, if Intel configured a hypothetical CPU with two blocks for P-Cores, and the remaining 8 blocks providing 32 E-cores, we’d see a tremendous uplift in rendering performance. If Intel was to introduce this technology to a larger CPU, there is potential for some pretty high core count options.

This is admittedly a fairly narrow view of how these CPUs work, and the potential benefits of the P-Core/E-Core technology. The main goal Intel has with E-Cores is for background tasks or processes that don’t need the full power of the P-Cores. The computer will be able to shift some tasks to these lower-powered E-cores to save on energy consumption, while still having 8 high-performance cores dedicated to active tasks. For the vast majority of users, that is probably a good compromise. However, that doesn’t mean power users can’t dream of what CPUs would be possible.

If you'd like to see how Intel's new processors work in real-world scenarios, check out our 12th Gen Intel Core CPU Review Roundup.