Over the last few years, both Intel and AMD have been steadily adding more and more cores to their CPUs. However, the new Intel Core X-series processors breaks this trend completely as they don't have any more cores than the previous generation. Intel did decide to drop the odd-ball 6 core model, but the standard lineup still ranges from 8 to 18 cores. Instead, these CPUs just have a slight frequency increase and other minor architecture updates. At first glance, these processors are underwhelming, but there are often hidden architecture changes that can significantly impact on performance so we will reserve judgement until after our testing.

Since Photoshop tends to primarily rely on just a handful of cores, another question is whether these new X-series models are able to keep up with the more moderately priced Intel 9th Gen Core i9 9900K. When we benchmarked that CPU in our Photoshop CC 2018: Core i7 9700K & i9 9900K Performance article, we found that it was easily the fastest CPU for Photoshop available at that time. The updates to these CPUs are likely to close that gap somewhat, but we will have to see if it is enough to make the X-series processors useful for Photoshop users. 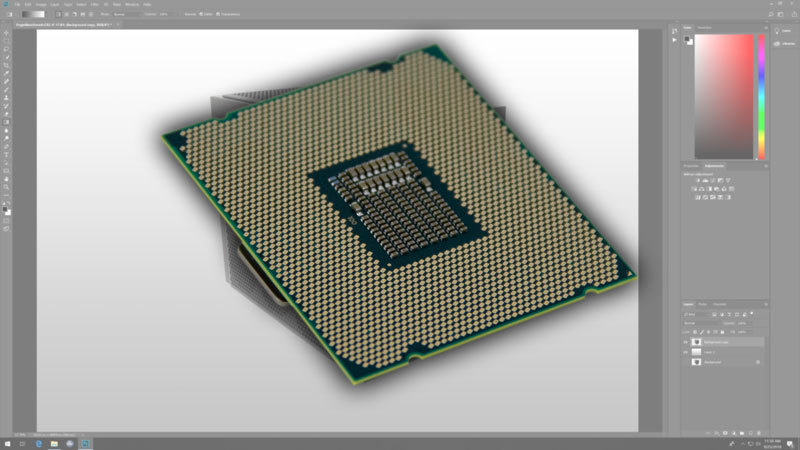 For the testing itself, we will be using version 18.10 of our Puget Systems Photoshop CC Benchmark which is currently available for public download. This benchmark tests a range of general tasks (open/save, resize, content aware fill, etc.), filters, as well as panorama photomerge. Full details on the benchmark are available on the benchmark download page. 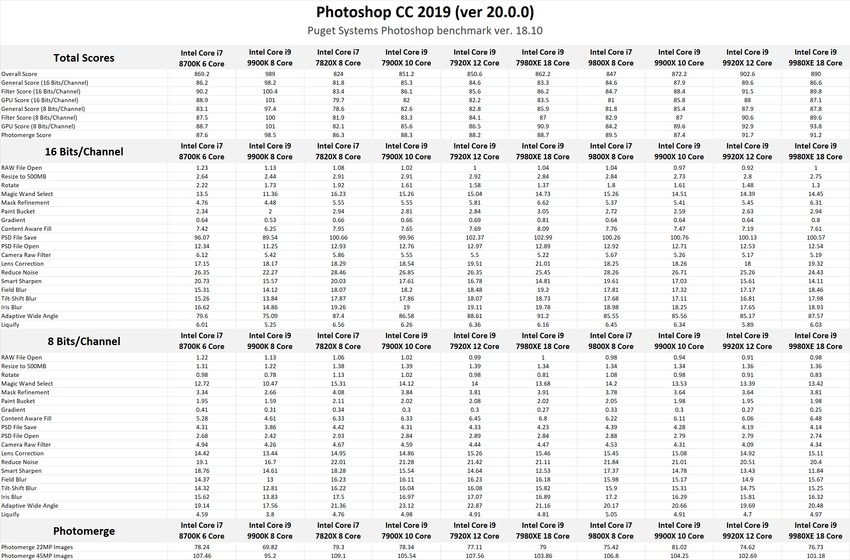 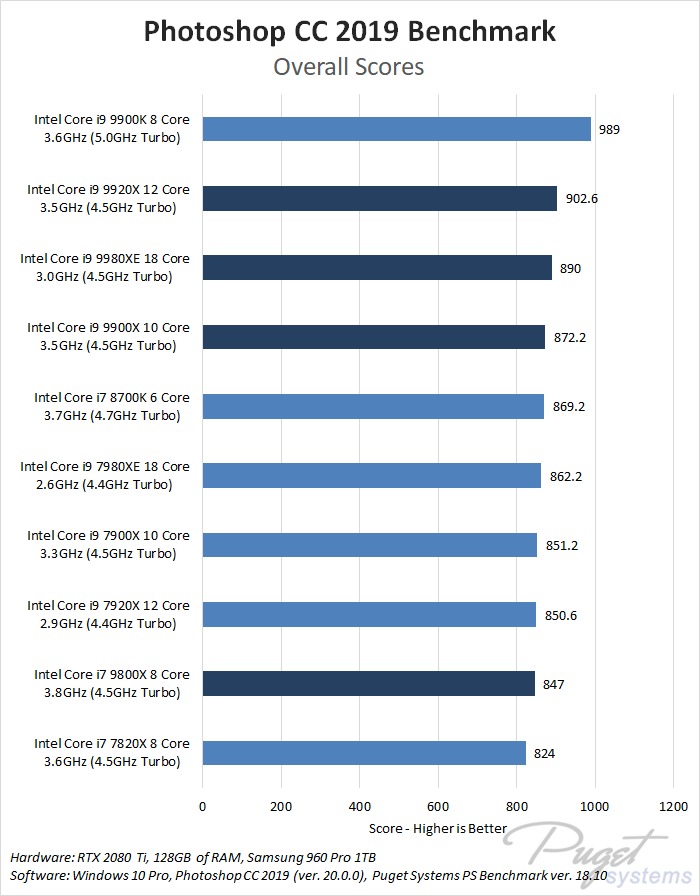 Our Photoshop benchmark tests a large number of tasks that we split into 4 categories: General, Filter, Photomerge, and GPU-accelerated (which contains both general and filter tests). In addition, with the exception of Photomerge, we also run each test in both 8 bits/channel and 16 bits/channel mode. Typically, we would go through each of these groups of tests one by one, but in this case, there were no real surprises so we decided to keep it at a high level and just look at the overall score.

If we sort by the overall score, you can see that the new X-series CPUs are not quite able to catch the Intel 9th Gen Core i9 9900K that was launched last month. However, with the exception of the i7 9800X, all the new models out-performed even the fastest X-series processor from the previous generation. It may not be by a huge amount, but there is definitely a small performance gain to be had with these new CPUs.

Are the 2018 Intel Core X-series Processors good for Photoshop?

The new X-series CPUs are certainly not bad for Photoshop, but if you are looking for the best performance, the more moderately priced Intel Core i9 9900K is still going to be the best you can get. Depending on the X-series model, the i9 9900K will be anywhere from 10-15% faster. 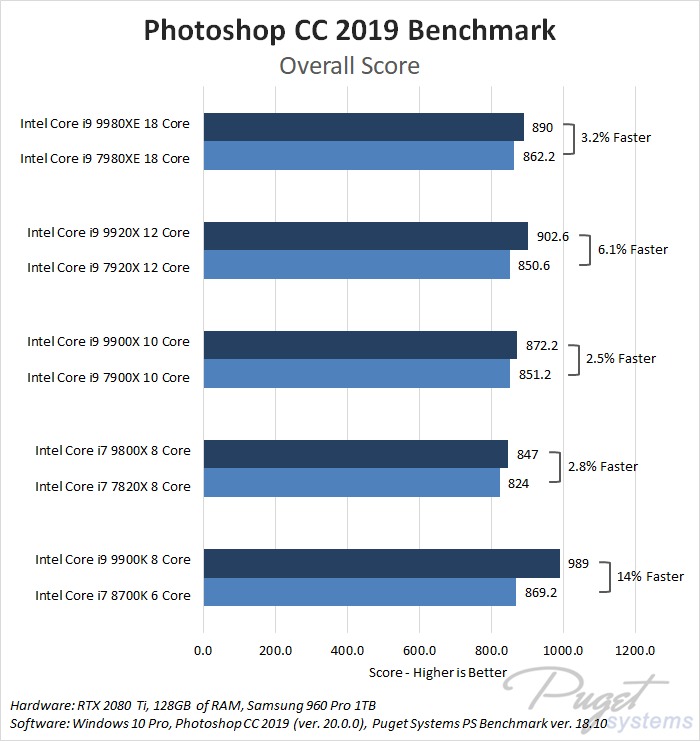 Overall, the new 2018 X-series CPUs from Intel are OK for Photoshop, but probably not the right choice if Photoshop is your primary tool. If you are a video editor or otherwise use Photoshop in more of a secondary role, however, these CPUs are likely to be just fine. They won't be the best, but unless you are doing really difficult things in Photoshop, they shouldn't hold you back either.

Compared to the previous generation X-series processors, these new models are slightly faster, but in most cases, you would be hard pressed to notice the difference.

The new i7 9800X is slightly faster than the i7 7820X in Photoshop, but we only measured about a 3% difference which is unlikely to be noticeable. Compared to the less expensive i9 9900K, either of these CPUs should be about 15% slower on average.

The i9 9920X saw one of the largest performance gains over the previous generation that we tested. Compared to the i9 7920X, the i9 9920X should be about 6% faster in Photoshop. However, this still is not able to allow it to quite catch up to the i9 9900K which is about 10% faster on average in Photoshop.

If you are interested in how these new Intel Core X-series Processors perform in other applications, be sure to check out our recent Processor articles as we have a number of articles for Lightroom, After Effects, Premiere Pro, DaVinci Resolve, and many other software packages.