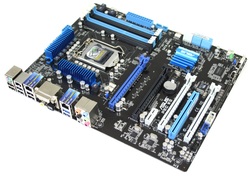 The Asus P8C WS motherboard is a workstation class board designed primarily for businesses class machines. While this does not mean it cannot be used in a home system, it contains several features to help enhance its reliability and stability which is crucial in a professional environment. The most prominent among these features is the ability to use Intel E3 Xeon CPUs and ECC memory in addition to standard Intel 2nd/3rd Generation 1155 CPUs and standard memory. This motherboard also includes several ports that are fairly uncommon, but sometimes needed in a business setting to ensure compatibility with existing devices.

Beyond the standard USB 2.0, USB 3.0 and RJ-45 (LAN) ports, this board includes Firewire 1394a ports, a PS/2 hybrid port and internal headers for both serial (COM) and parallel (LPT) ports. The motherboard comes with a serial (COM) port bracket, but a separate bracket will need to be purchased if you want to use the parallel port.

Full specifications for the motherboard are below:

Note that while this motherboard supports non-registered (unbuffered) ECC memory; it only does so when used in conjunction with an Intel Xeon CPU.

Unlike most recent motherboards that ship with fewer and fewer accessories, the Asus P8C WS comes with plenty of cables and adapters.

The included items are: 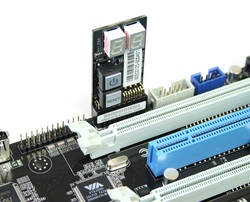 This motherboard also includes a G.P. Diagnostic card which can plug into the TPM module header on the motherboard. The functionality of this card is usually integrated into Asus boards, but there must not have been adequate real estate on the board this time around. Including it as an add-on card is great and something we certainly appreciate, but we recommend leaving uninstalled unless you are having problems with your system. What this card does is gives you internal power/reset buttons as well as a diagnostic LED display. This display gives you codes according to what the motherboard is currently doing which can often help when troubleshooting a problem.

Even though this motherboard can use Intel Xeon CPUs, the BIOS has all of the great features we have come to expect on an Asus motherboard. Most notably, the BIOS contains a UEFI visual BIOS, OC Profiles, EZ Flash 2, Qfan, and all the standard device configuration options. RAM settings are fully configurable with options for frequency, timings and voltage.

Overall, this is a great BIOS that has more than enough customizability to suit almost any need.

Starting at the top, there are six external USB 2.0 ports, but only a single internal USB 2.0 header. There are however two type A (standard USB) USB 2.0 ports internally which can be used for any normally external devices that you want to have internal. For USB 3.0, there are two external ports as well as one internal header which can provide an additional two USB 3.0 ports. The small number of internal USB headers is definitely a concern, but the large number of external ports should provide enough USB ports for most users. Unlike the majority of motherboards on the market, this board also has both an internal and external Firewire IEEE1394a port/header.

There are two SATA 6 Gb/s ports, and four SATA 3 Gb/s ports, all of which support hot-swap as long as the Intel RSTe software is installed. For networking, there are two Gigabit Intel LAN ports on the rear I/O panel. Finally, this motherboard has just a single DVI port for use with the CPU's integrated video (if available). Users who wish to use more than one monitor will need to purchase a discrete video card for the additional video ports.

Moving on to the PCIe slots, here is a list and picture of the slots available on this motherboard:

Note that while the two PCI Express 2.0 slots are technically both x16, they both will be reduced to x8 speeds if any card is installed into the second slot.

After reviewing the layout of the motherboard, we found very little that caused us any concern. In fact, the only thing that we did not like was the location of the front panel audio header (#21 on the schematic). No matter what, the audio cable will have to be strung across at least half of the motherboard in order to plug into this header making clean cabling very difficult.

On the positive side of things, all the other ports and headers are in great locations which should allow for very clean cabling. Even the CMOS battery is in a fairly decent location below the second PCI-E slot rather than the more common location under the primary PCI-E slot. It may not seem like a big deal, but being able to remove the battery to completely clear the CMOS without having to remove the video card makes things much easier.

One other thing to point out is the "Chassis Fan control setting" jumper (#20 on the schematic). What this jumper does is allow you to switch the chassis Qfan (dynamic fan control) to either 3-pin (standard) or 4-pin (PWM) mode. Qfan on most modern Asus motherboards only works with PWM-based fans, so having this jumper allows for greater flexibility with the type of chassis fans you can connect to the motherboard.

The majority of the other checkpoints are designed to verify that the motherboard will function properly with a wide range of hardware. For that reason, we test using onboard video, Nvidia Geforce, AMD Radeon HD and Nvidia Quadro based video cards. We also test the motherboard with the largest quantity of RAM we can (4 x 8GB sticks) and with the fastest RAM currently offered by Puget Systems (DDR3-1600MHz). Since this motherboard supports Intel E3 Xeon CPUs, we also verified functionality with both an Intel Xeon and Intel 3rd Generation Core i7 processor.


Out of all our testing, the only major issue that came up was that the onboard video was unable to run Unigine Heaven Pro 3.0 at maximum settings without receiving a DX11 error. Since these settings are way, way higher than you would ever run with onboard video (1920x1080, 8xAA, 16AF) and are a CPU issue rather than a motherboard issue; we decided not to count this against the motherboard. The second issue was that VMware vSphere does not support any of the thermal sensors on this motherboard. Since this motherboard is not on the official supported list of motherboards, however, this is not much of a surprise and not something we can really hold against this board.

With every combination of video card and RAM, the system was rock solid throughout our testing. The system passed every benchmark we threw at it, and easily completed our standby and reboot loops. Since coax and optical SPDIF is uncommon, we also specifically tested for audio over those ports (they worked great!).

Drivers in both Windows and Linux installed without any surprises and we had no problems installing and using VMware vSphere. Since there were a few issues between Ubuntu and USB 3.0 when it first came out, we also specifically confirmed that USB 3.0 ran at full speed within Ubuntu.

Overall, we are very happy with this motherboard. It passed all of our testing with very few issues and didn't require any special configuration to get it to work with Intel Xeon CPUs. While the lack of SLI support means that this board may not be the best when used in a gaming computer, the wide variety of ports and compatible hardware means it is an excellent choice for either a business or home computer.

The only two issues we have with this board are the small number of internal USB 2.0 and USB 3.0 headers and the lack of multiple onboard video ports. With the increasingly large number of front USB ports on many of today's chassis, it is possible to have more front ports than there are headers on this motherboard. Overall however, this board and the platform it is built on should be extremely reliable. Due to this, look for this board to start becoming available in some of our systems in the near future. 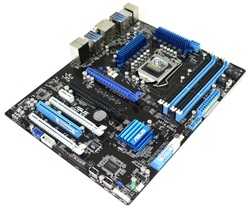